Do Ice Cores Show Many Tens of Thousands of Years?

From the top of the Greenland ice sheet, glaciologists further claim that they can count the annual layers downward. They arrive at 110,000 years for the top 90 percent. Is their claim justified?

In the sequence of events in the creation-Flood Ice Age model, at the end of deglaciation, the Ice Age was effectively over. Yet some ice sheets continued to grow. The Greenland and Antarctica ice sheets are remnants left over from the post-Flood Ice Age (figures 12.1 and 12.2). They were protected from melting by their location in the polar latitudes and by the high altitude of the ice deposited during the Ice Age. The altitude of the ice is an important factor since the atmosphere cools at an average of 3.6°F per 1,000 feet (6°C per 1,000 m).

It is interesting to note that the Greenland and Antarctica ice sheets may never have grown to their present size, if it were not for the initial thickness of ice at the end of the Ice Age. Some scientists believe that if the ice somehow disappeared, it probably would not return in the present climate. This is especially the case for Greenland.

Many ice cores have been drilled deep into both the Antarctica and Greenland ice sheets since the 1960s (see figures 12.1 and 12.2). It is observed today that these ice sheets incorporate dust, acids, pollution, etc. that cycle with the seasons. Near the top of the ice sheets, annual layers can be distinguished by measuring the many variables related to the seasons. From the top of the Greenland ice sheet, glaciologists further claim that they can count the annual layers downward, like counting the rings in a tree to determine its age. They arrive at 110,000 years for the top 90 percent of the ice sheet.1 Is their claim justified? 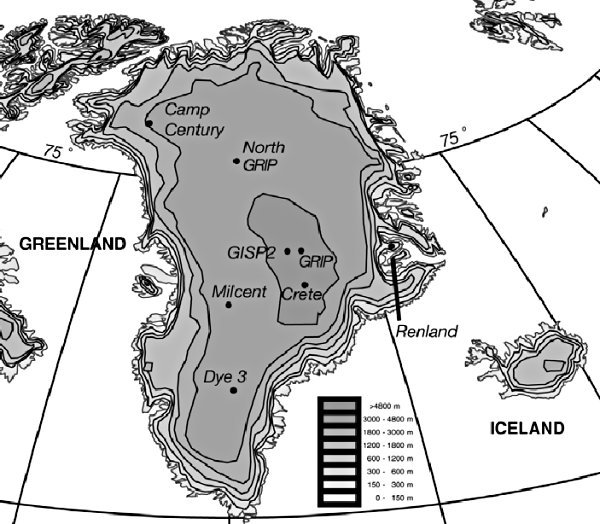 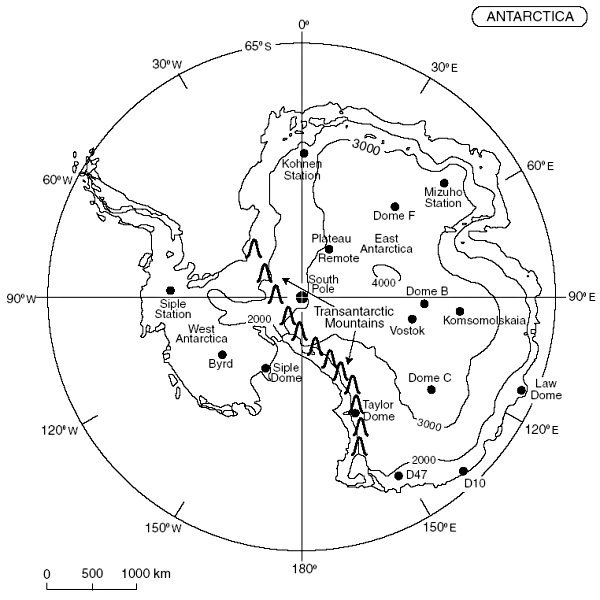 Are there 110,000 annual layers in the Greenland ice sheet?

The main assumption is that the earth is very old — billions of years old. They assume that the Greenland and Antarctica ice sheets have existed for many millions of years. Furthermore, they believe these ice sheets have more or less maintained their present height in a state of equilibrium during all this time. They think the amount of snow and ice added each year is approximately balanced by the ice that is lost by melting and calving of icebergs into the ocean. Because of their assumptions, uniformitarian scientists believe that the annual layers thin drastically as they are covered by more snow and ice (figure 12.3). The upshot of their assumptions is that the amount of annual layer compression believed to have occurred depends upon how old one believes the ice to be. For an ice sheet in equilibrium for millions of years, the annual layers would, theoretically, thin rapidly and become almost paper-thin near the bottom of the ice. 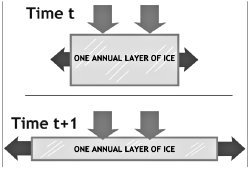 Figure 12.3. Annual layers of ice are compressed vertically and stretched horizontally due to pressure from accumulating snow and ice above. 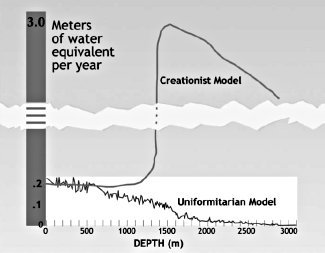 Figure 12.4. The thickness of annual ice layers down the GRIP ice core on central Greenland, calculated according to the uniformitarian4 and creationist5 models.

Since the creationist model postulates an annual layer thickness significantly thicker, say 12 inches (30 cm) as an example, the uniformitarians have taken more measurements than needed and are, therefore, measuring multiple cycles of oxygen isotopes within one year. This is how the number of annual layers becomes greatly exaggerated.6

Fundamentally, in counting any annual marker, we must ask whether it is absolutely unequivocal, or whether nonannual events could mimic or obscure a year. For the visible strata (and, we believe, for any other annual indicator at accumulation rates representative of central Greenland), it is almost certain that variability exists at the subseasonal or storm level, at the annual level, and for various longer periodicities (2-year, sunspot, etc.). We certainly must entertain the possibility of misidentifying the deposit of a large storm or a snow dune as an entire year or missing a weak indication of a summer and thus picking a 2-year interval as 1 year.

Have they measured 700,000 years in the Antarctic ice sheet?

The method of counting annual layers only works with the high accumulation Greenland ice sheet. However, the deep Antarctic ice sheet cores have been dated to over 300,000 years showing multiple ice age cycles. The new deep Dome C ice core from the top of the Antarctic ice sheet is claimed to have drilled seven ice age cycles for a total of about 700,000 years near the bottom. Are these ages objective?

Except for coastal ice cores that show only one ice age cycle, the Antarctica ice sheet is dated by assuming that the astronomical theory of the ice age is correct.9 In fact, this assumption also undergirds the annual layer dating of the Greenland ice sheet.10 This is how they obtain three or more ice age cycles, with each cycle being 100,000 years long. They simply count the assumed number of ice age cycles and multiple by 100,000 years, the assumed period for the astronomical theory. These dates are not objective; they simply are based on the assumption of the astronomical theory and old age, which was discussed in chapter 6. It is easy to reinterpret the data from the ice sheet within the creationist’s framework, as we will see in the next section.

At the peak of the Ice Age, the average thickness of the ice sheets in the Northern Hemisphere was estimated to be 2,300 feet (700 m), while on Antarctica it was 3,900 feet (1,200 m). The ocean water was still relatively warm at an average of 50°F (10°C). It still needed to cool another 11°F (6°C) to reach the current average of 39°F (4°C). The relatively warm water adjacent to Greenland and Antarctica during deglaciation would have continued to cause significantly greater ocean evaporation resulting in relatively high precipitation to fall on the Greenland and Antarctic ice sheets.

The average precipitation in water equivalent on the Greenland ice sheet is 12 in/yr (30 cm/yr) with more than 60 in/yr (150 cm/yr) on the southeast corner and below 8 in/yr (20 cm/yr) for a substantial part of the high northern half of the ice sheet.13 The average precipitation for Antarctica is 7 in/yr (19 cm/yr), which varies from relatively high values near the coast to around 2 in/yr (5 cm/yr) for the majority of the high East Antarctica ice sheet.14 It is interesting that the precipitation is so low over the high altitudes of the Antarctic ice sheet that the region is considered a polar desert.

The precipitation of the southeast Greenland ice sheet is surprisingly high. During World War II, six P-38 Lightning fighters and two B-17 Flying Fortress aircraft were forced to ditch on the southeast Greenland ice sheet, 18 miles (29 km) from the ocean. A team went back to recover them in the late 1980s and discovered that the planes were buried under 260 feet (80 m) of ice and snow that had accumulated since 1942!15 These planes did not end up buried in the ice and snow because they absorbed solar radiation and sank into the ice sheet. They are at this depth because of the high precipitation that covered them. Such high precipitation is not typical for the remainder of the ice sheet, but gives us a hint of the possibilities when the ice sheet was much lower and the climate much different in the Ice Age. 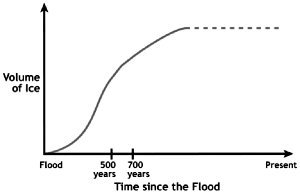 Figure 12.5. Time-line for the buildup of the Greenland and Antarctica ice sheets from the time of the Flood to the present.

Based on strict biblical chronology and assuming no gaps in the ancestral lists, the Ice Age ended about four thousand years ago. Since then, many hundreds of feet of ice would be added to the Greenland and Antarctica ice sheets. Of course, ice would also be lost during this time. This loss would mainly be from surface melting, which is only significant on the Greenland ice sheet, and iceberg calving. In spite of melting and calving, these two ice sheets very likely continued to build to their present altitudes in the 4,000 years since the end of the Ice Age.

The model presented in this book can account for the current prominence of the Greenland and Antarctica ice sheets during a short Ice Age of about 700 years and the present climate for another 3,700 years.16 Figure 12.5 shows a time-line for the buildup of the ice sheets from the end of the Flood to the present.

The uniformitarian interpretation of the “annual layers” within the bottom half or Ice Age portion of the ice cores drilled near the top of the Greenland ice sheet has resulted in some wild ideas.17 Some of the variables in the lower sections of the cores show dramatic and rapid changes (figure 12.6). Based on their uniformitarian assumption, mainstream scientists are now forced to come to strange conclusions. They see these oscillations within the Ice Age as representing temperature changes on Greenland possibly up to 36°F (20°C) in periods as short as a few decades!18

Figure 12.6. Plot of oxygen isotope fluctuation, considered proportional to temperature, during the Ice Age in the GISP2 ice core (from M. Schultz19).

Such oscillations continue down into the very bottom of the cores, thought to represent the previous interglacial period. Some scientists think these oscillations are radical temperature changes during an interglacial. Since we live in a supposed interglacial, such radical changes are considered possible in today’s climate. Since these core changes probably represent the climate around the North Atlantic Ocean, climate researchers fear that the present climate could undergo a similar change in the future, induced possibly by global warming.20 Currently, they are desperately searching for some sort of mechanism that would cause such catastrophic climate change to explain these oscillations in the very bottom of the ice cores. They are considering a few possibilities, such as a halting of the ocean currents in the North Atlantic Ocean. However, other scientists believe the very bottom of the Greenland ice sheet was disturbed by ice sheet flow, and the oscillations, therefore, are climatically meaningless.

In the creationist model, on the other hand, such rapid oscillations, whether in the Ice Age portion or the lower supposed interglacial portion, could simply be the signature of annual layers or decadal temperature changes caused by variable amounts of volcanic dust and aerosols in the stratosphere. This is because the creationist annual layer is so much thicker in this part of the ice core. Therefore, we do not have to fear the possibility of a catastrophic climate change in the near future.

Previous Chapter Only One Ice Age Next Chapter Where Was Man During the Ice Age?

Author Michael Oard gives plausible explanations of the seemingly unsolvable mysteries about the Ice Age and the woolly mammoths. Many other Ice Age topics are explained including super floods, ice cores, man in the Ice Age, and the number of ice ages.