A Snake Version of Lucy

“It’s the missing-link snake,” according to Yale paleontologist Nicholas Longrich. “It’s the ‘Lucy’ of snakes.” Longrich is lead author of a paper published July 25 in Nature asserting Coniophis precedens, a fossil found in Wyoming a century ago, represents an evolutionary transitional form between snakes and lizards. After examining the jaw, teeth, and vertebrae of the fossil, Longrich and colleagues note there are features of both lizards and snakes present and therefore conclude the creature is an “ancient protosnake” that can unveil the secrets of snake evolution.

Incidentally, the authors do not claim the Coniophis was ancestral to modern snakes but was instead a “living fossil” in its own time. Longrich says, “It’s not the direct ancestor of modern snakes, but it tells us what the ancestor looks like. A lot of evolution happened around it.”

Snakes are the most diverse group of lizards, but their origins and early evolution remain poorly understood owing to a lack of transitional forms.

“Snakes are the most diverse group of lizards, but their origins and early evolution remain poorly understood owing to a lack of transitional forms,” the authors write.1 They believe without doubt that snakes (and all other creatures for that matter) evolved from simpler kinds of life. They seek rather to know what features evolved in what order and what creatures were ancestral to what. For instance, evolutionists have long puzzled over whether snakes were descended from marine or terrestrial ancestors. Coniophis was found in rock layers conventionally dated at about 70 million years with many other sorts of creatures such as mammals, dinosaurs, and terrestrial lizards. But because it seems to have “primitive” snake features, has vertebrae shaped like those of extant burrowing snakes, and lacks marine adaptations, the authors believe the case for terrestrial evolution of snakes is proven. 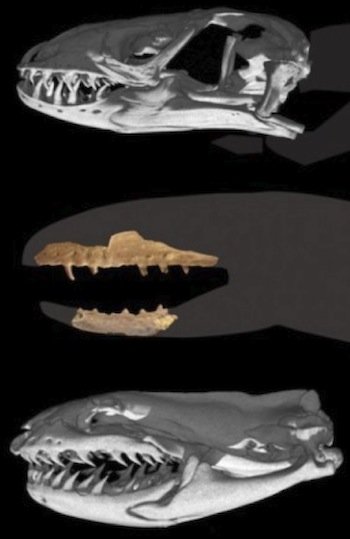 Compare the skull of the gila monster (a non-snake lizard; top) and the modern pipe snake skull (bottom) to the pieces of Coniophis skull (center). Many subtle features of the Coniophis jaw are typical of snakes, but the upper jaw seems unable to unhinge to accommodate disproportionately large prey in the usual snake fashion. But is this an example of “snake evolution” or just “snake diversity”? (Illustration from Nicholas Longrich through squamates.blogspot.com)

“Coniophis . . . supports the hypothesis that the elongate body and reduced limbs of snakes evolved as burrowing adaptations,”2 the authors write. “Coniophis thus represents a functional chimera, combining a snake-like body with a lizard-like head. The picture that emerges for Coniophis is of a small, fossorial [burrowing] carnivore that preyed upon small vertebrates.”3

So what exactly is “transitional” about this fossil? Why do the authors call it a “chimera”? Longrich explains, “It moves like a snake, but it doesn’t feed like a snake.” This study deals primarily with the skull and has nothing to do with the presence or absence of legs. The shape of the teeth, the way they are implanted into the jaw, and the presence of an “intramandibular joint”4 are features consistent with snake jaws. An intramandibular joint allows the front part of a snake’s lower jawbone to rotate slightly relative to the back part of the jawbone. However, the upper jawbone, in contrast to the usual snake anatomy, seems “firmly united with the skull,” which would have made Coniophis unable to unhinge the mouth to swallow huge prey whole.5

Lizards and snakes have enough similarities to be classified in the same group of reptiles—the squamates. In fact, the evolutionary authors themselves think that snakes are really a specialized form of lizard. (We believe this is an oversimplification, for despite their many similarities lizards and snakes have a number of distinctive differences.6) There are also legless varieties of non-snake lizards. Some snakes have some hip- and leg-like bones, though only inside the body. Many experts—even creation scientists—believe it is quite possible snakes once had legs. For instance, Rick Teepen—who presents the “Snakes Alive” presentation at the Creation Museum—explains, “I believe snakes may have had legs thousands of years ago (not millions of years ago),”7 and his conviction rests not just on the fact that some snakes have leg-like bones internally but on God’s Word. Indeed, God’s eyewitness account of His curse upon the serpent after Satan used its body to deceive Eve, recorded in Genesis 3:14, includes some sort of change in serpent characteristics. God said to the serpent, “Because you have done this, you are cursed more than all cattle, and more than every beast of the field; on your belly you shall go, and you shall eat dust all the days of your life.” This could indicate—if the “Genesis 3 serpent” was a snake—that snakes had legs before that time.

But whatever the original created kinds of snakes and lizards and other reptiles were like, God created them about 6,000 years ago to reproduce after their kinds.

But whatever the original created kinds of snakes and lizards and other reptiles were like, God created them about 6,000 years ago to reproduce after their kinds. They, like all creatures, were able to vary within their created kinds. So even if snakes once did have legs, the loss of the ability to move about on legs would represent a loss of information, not a gain.

The limited information available about Coniophis from examination of a few of its bones—without the rest of the creature to look at—reveals a creature that seems to have some characteristics typical of snakes and some typical of non-snake lizards, but that does not mean lizards and snakes evolved from some sort of non-reptilian lower life-form.

Assuming the interpretation of the “firmly fixed” maxillary bone is correct, it may be that Coniophis was a snake that had lost the genetic ability to open wide. Or it may be that the genetic information in some original created kinds of reptiles contained information for traits we now use to distinguish snakes and lizards. In fact, this creature may simply have possessed a mosaic array of traits suited to its needs in the same way a platypus combines traits we normally associate with ducks, mammals, and snakes.

Such a morphological mosaic, or chimera, is not the same as a transitional form. Describing a mosaic mixture of traits is describing something we can observe. Describing evolutionary transitions, however, is an imaginary exercise based on unverifiable assumptions about the past. We can only speculate, as do the evolutionists, about the specifics of how the genetic information in the past produced the diversity of species we see today. But while evolutionary speculation is guided by the belief that never-observed upward evolutionary transitions happened, the parameters of our speculation are set by the eyewitness account God has provided and the observable facts of biology that confirm it: creatures really do reproduce after their kinds.

This study does not, as one journalist wrote, strengthen “the robustness of the theory of evolution.”8 The fossil does not demonstrate that any sort of creature acquired genetic information to become something else but only that variation within created kinds allowed this apparent mosaic to exist. Such variations can result from original design or the regulation and reshuffling of existing genetic information and its mutations, but they do not involve the acquisition of new information required for upward evolution.

Frankly, the authors plainly believe that snakes are merely a kind of lizard and that this creature appears to be a chimera of the specialized snake and the less specialized lizards. Therefore, far from demonstrating the “robustness of the theory of evolution,” the discovery merely underscores the diversity of lizards and snakes. Coniophis’s mosaic of features do not make it “the missing link” and should not prompt anyone to swallow the theory of evolution whole.