Does This Evolutionary Claim Have Any Legs?

A recent AP article on a new fossil find claims that "snakes evolved on land rather than in the sea.”

As a fossil find,1 it really is nothing new; yet many media outlets are picking up an Associated Press (AP) article2—based on a soon-to-be-released article in the journal Nature—about a snake fossil that supposedly features hind legs. The AP article states that a “new fossil discovery has revealed the most primitive snake known, a crawling creature with two legs, and it provides new evidence that snakes evolved on land rather than in the sea.”

Aside from the questions that would pop up with such a discovery in the context of the raging creation/evolution debate (which we will address in a moment), there is within the evolutionist community a debate over whether the ancestors of snakes were lizards who lived in water or lived on land.3 In other words, evolutionists do not universally agree on how (i.e., where) snakes evolved. 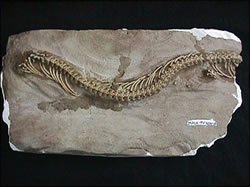 This new snake fossil (allegedly 90 million years old) was found in Argentina, and it will be more formally introduced soon in the increasingly evolution-focused British journal Nature.4 The Nature article attempts to show that this is the first snake fossil that possessed small legs (toward the rear of the skeleton), as well as a bony structure called a sacrum, which supported the pelvis. The evolutionary story is that because this snake had such bones, it is therefore a transitional form between lizards and (legless) snakes. In other words, as snakes evolved away from lizards, their legs eventually disappeared.

With such a new claim, AiG researchers will need to devote some time to evaluate the Nature article when it appears. Meanwhile, here are some preliminary thoughts on the AP story: