The marvelous diversity of life—from pronghorns to pandas—reveals something, but what? Each organism has a unique combination of traits perfectly suited for its needs. It appears that the complex, all-wise, triune Creator left His mark in every thread in the tapestry of creation.

When George Shaw, the British Museum curator, saw the animal pelt lying before him, he had trouble believing it was not a hoax. It looked like a variety of parts taken from different animals and sewn together.

Before the end of the eighteenth century, no European biologist had ever seen a mammal with a duck-like bill. Interest in the platypus (a unique animal from Australia) grew when people realized that, of the thousands of mammal species in the world, only it (and the echidna) laid eggs! The platypus has a fascinating and unique combination of characters.

Similarly, the pronghorn might be seen as just another fleet-footed, magnificently beautiful deer, if not for its “prongs.” Like deer antlers, the prongs are branched (in males), and they shed and regrow every year. But like horns on cattle, the prongs are made out of a different substance, similar to our fingernails (keratin), which grows on a bony core.

The red panda is another example. Because it is cute, nonaggressive, and easy to care for, the red panda is popular in our zoos. But the unassuming creature is a bit baffling to scientists who classify animals. Its ringed tail and “masked” eyes make some people think it must be a type of raccoon. And, sure enough, some experts want to classify it that way. But other characteristics suggest that it should be grouped with the bears.

The name “red panda” reflects its close association with another animal, which possesses both raccoon and bear traits—the giant panda. Unlike raccoons and typical bears, both the giant and red pandas have unique “thumbs” on their wrists! (These “thumbs” are not constructed from finger bones like our thumbs, but they are actually extensions of wrist bones, called radial sesamoid bones.)

The Mystery of Mosaics

The platypus, the pronghorn, and the red panda are just three examples of animals that possess a mosaic of traits we wouldn’t expect to find together in one animal. Mosaic animals defy classification into just one group with which they share some traits, so scientists often classify mosaics into groups of their own. 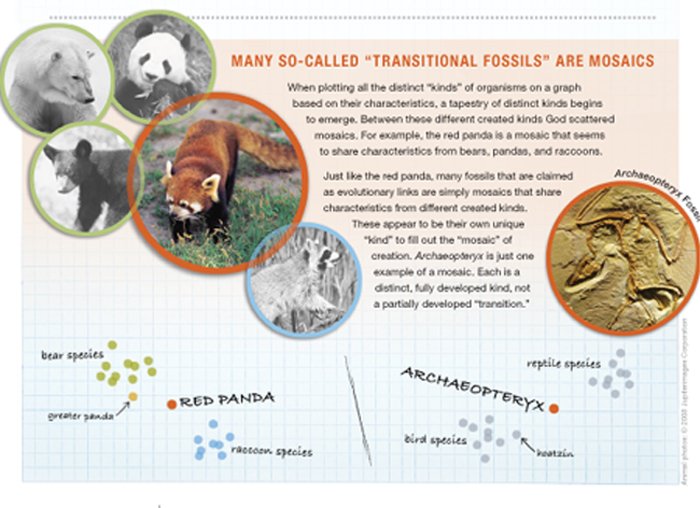 Mosaic organisms are found throughout God’s creation. They have all sorts of strange names, but if you’re familiar with the organisms, the strange combinations are just as striking as the platypus, pronghorn, or red panda:

My personal favorites are the arthropod fossils of the Burgess Shale of the Rocky Mountains. Arthropod bodies generally have two or more main body segments with an assortment of appendages attached to the segments.

As Stephen Jay Gould described them in Wonderful Life, it was as if their parts were strung together by what Gould called the “Great Token-Stringer.” Reaching into a barrel of different arthropod heads, another barrel of thoraxes, and other barrels with abdomens and legs, the Token-Stringer seemingly “strung” the parts together in random sequence. Upon completion, in the words of Gould, “Voilà, it works.” The Burgess arthropods are bizarre mosaics.

So, in nature we find many strange creatures—arthropods strung together like a necklace, a panda’s “thumb” jimmied from a wrist bone, and a platypus sewn together from body parts like a hoax. These images don’t evoke design. At least, that was Gould’s argument in a book about the clumsy appearance of the panda’s thumb.

However, a closer look at mosaics suggests otherwise. The panda’s thumb, for example, turns out to allow greater clamping precision than is possible with our thumbs. Similarly, the platypus bill is remarkably designed to detect electric fields of the animals it eats. Likewise the pronghorn, which is in the running for the title of “fastest land animal on the planet,” is hardly an example of poor design.

We might think a mosaic combination of features could only result in clumsy design, but mosaic organisms show otherwise. Mosaics are evidence of creation by the wise God of Scripture, who has a purpose for everything.

On God’s magnificent easel of creation, He spoke into being one grand, magnificent mosaic that incorporated a diverse array of distinct organisms.

I suggest that mosaics are actually a common feature of God’s world, by design. On God’s magnificent easel of creation, He spoke into being one grand, magnificent mosaic that incorporated a diverse array of distinct organisms.

If you could plot all the distinct created “kinds” of organisms on a graph, based on their features, you would see that God filled the graph with a tapestry of distinct kinds. Between these different kinds God scattered mosaics.1 For instance, between deer and antelope kinds He put pronghorns; between raccoon and bear kinds He put pandas; and so it goes.

Mosaics in the Fossil Record

Yet those who reject the Creator can twist the message of these mosaics. If they want to see similarities among organisms as evidence of genetic relationships, rather than God’s design, then they call the mosaics genetic “intermediates.” When mosaics are found between two groups that they believe to be related by evolution, they herald these mosaics as evolutionary “links.”

There is an altogether different, and biblical, way to interpret mosaics in the fossil record. If God created a tapestry of different ecosystems before Noah’s Flood, we would find different creatures living in ecosystems right next to each other. It’s reasonable to expect that God occasionally created intermediate environments between ecosystems and placed mosaics into that environment. If this is true, and if the rising Flood waters took out one ecosystem at a time, then the Flood might have occasionally buried mosaics in a layer between two other, similar organisms.2

Despite claims to the contrary, these mosaics have always been challenging for evolution. Think about it. The traits that make them a mosaic are fully developed characteristics of the other groups. They are not the partially developed, intermediate traits that evolution intuitively would expect. It is impossible for an evolutionary biologist to explain how the fully developed traits of “curious mosaics” (as Stephen Jay Gould once called Archaeopteryx) could have come to be.

So, on the one hand, evolution has far too few links. On the other hand, the world is full of links the evolutionist cannot use at all. It appears as though God intentionally created the world this way, to reinforce His unique role as the Author and Creator of the mosaic of life on this planet.

Only when isolated mosaics are picked selectively out of context, while ignoring the difficulties of acquiring fully developed characteristics from scratch, can any mosaic be claimed as evidence of evolution. In contrast, when considered as a whole, mosaics are better understood as wonders in God’s tapestry of creation—evidence of a beautifully complex triune God, a God who is both three and one, both diverse and singular, both orderly and surprising.

Previous Article Subscriber Exclusives Next Article The Mystery of Life