Are We One of Many, or Did God Design the Universe with Physics That Actually Works?

Is our universe just too good to be true?

Our world, and our universe, seem remarkably fine-tuned. The laws of physics work together so well that Albert Einstein thought the universe had a quality of “naturalness.” By this he meant that the laws of nature work together because there’s just no other way they could. But in fact, they are too fine-tuned, many physicists now think. And Higgs boson particle discovered a year ago at the Large Hadron Collider (LHC)—supposedly the capstone for conventional big bang cosmology (which biblical creationists reject)—has instead reminded physicists of an uncomfortable truth.

For several decades, physicists have periodically pointed out that some of the physical constants required to make those wonderfully impressive equations work out are far different from the values predicted by modern theoretical physics. Those equations accurately and precisely describe what is observed in the physical world. But the actual physical constants that make those equations work differ greatly from those predicted by the “standard model” embraced by big bang cosmologists. 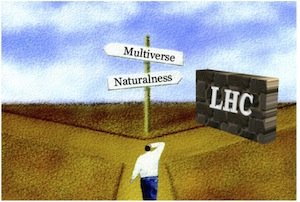 Will the failure of the Large Hadron Collider to spit out more particles in the wake of the Higgs boson discovery force physicists to espouse faith in an undetectable multiverse in order to avoid the uncomfortable alternative that the universe was intelligently designed? Image: by Giovanni Villadoro through www.simonsfoundation.org

It is “bad enough” from the point of view of those accepting the standard model that the entire universe should have collapsed to a point the moment after it formed. In order to keep this from happening in the big bang model of origins, the universe’s “dark energy” or “cosmological constant” must be ten trillion times smaller than its predicted value. Back in 1987 the Nobel Prize-winning physicist Steven Weinberg calculated that the cosmological constant actually makes sense if our universe is but one of many universes. In each of these proposed universes, the laws of physics would vary, such that with a virtually infinite number of possibilities life actually evolved in the one that worked. And according to “string theory,” there would be about 10500 possible universes for random chance to choose from.

The multiverse idea has waxed and waned in popularity. But the Higgs boson particle that was finally found using the Large Hadron Collider last July has a mass much too small for comfort. The Higgs particle is not a disappointment from the standpoint of particle physics. The Higgs boson discovery is consistent with the current theory of why elementary particles have mass. Nima Arkani-Hamed, a physicist at Princeton, New Jersey’s Institute for Advanced Study, discussing the particle’s significance, said, “The fact that it was seen more or less where we expected to find it is a triumph for experiment, it’s a triumph for theory, and it’s an indication that physics works.”

The mass of the Higgs boson, however, is exponentially different from its predicted value.

The mass of the Higgs boson, however, is exponentially different from its predicted value. Current cosmological theory can only support such a Higgs if there are a lot more particles lurking in the Large Hadron Collider. Yet no more have been found. When the LHC comes back online in 2015, the search will continue, but some physicists—eager to avoid the inevitable alternative of “intelligent design”—are jumping on the multiverse bandwagon in case none are found. Arkani-Hamed explains, based on the current state of physics, that “The universe is inevitable. The universe is impossible.” Both declarations must be true, and because they are mutually contradictory statements, they could only be true in a multiple universe scenario.

Of course there is no way to prove that multiple universes exist and no scientific support for the idea. None, that is, except that the only other alternative is that the universe was actually designed. Intelligent design is not “proof” that God exists, but the position is an uncomfortable one all those whose worldviews demand that no supernatural power or designer exists.

Answers in Genesis astronomer Dr. Danny Faulkner, commenting on the recent rumbles in favor of the multiverse idea, says:

The idea of other universes long had been the venue of philosophy and science fiction. When the idea of the multiverse began to be discussed a few decades ago, most astronomers, cosmologists, and physicists considered it pretty silly. However, it began to get traction among cosmologists in the 1990’s.

The first I heard of this being a serious thought was from Martin Rees, the current Astronomer Royal, who wrote about it in his 1997 book, Before the Beginning. None of the previous well-known popular level discussions of cosmology contained any mention of it. These books include Steven Weinberg’s First Three Minutes (1977), Stephen Hawkings’ A Brief History of Time (1988), and Paul Davies’ God and the New Physics (1983), though Davies briefly discussed the multiverse in his The Mind of God (1992).

But now the multiverse idea has gained currency and is seriously put forth as an explanation of why the universe is the way that it is. In his recent book, A Universe from Nothing (2012), Lawrence Krauss takes the multiverse as a given. The now widespread belief in the multiverse among cosmologists amounts to a surrender in the war over design. They have painted themselves into a corner, because, even with their big bang cosmogony they are left with strong theistic implications. Unwilling to accept that there may be a God, they in desperation have resorted to defining away the problem. There is no evidence for a multiverse, nor, by definition, could there ever be.

This is a radical departure into philosophy or religion, but it doesn’t seem to bother these cosmologists. Having painted themselves into a corner, blowing the wall away to make a door to escape through is the only choice that they have. This is a tacit admission that they have lost the design debate for this universe.

The multiverse concept postulates that there exist other realities in which even the physical laws governing reality are different. Thus, given enough time and enough realities, random processes could result in absolutely anything. And because the random processes that supposedly produced “us” are the only ones we can know about, none of this tale can be subjected to the scientific method and experimental science. Thus the multiverse is a convenient way to wiggle out of the scientific inconsistencies of the standard model—a conveniently insupportable way, that is.

Intelligent design is not the same as a belief in God.

The only alternative to the multiverse, some fear, is intelligent design. Intelligent design is not the same as a belief in God. As Jewish radio talk show host Dennis Prager opines, “To posit the existence of a Creator requires only reason. To posit the existence of a good God requires faith.”1 Those who admit that the universe must be intelligently designed can discover exactly who that Designer is in the Bible.

The God of the Bible—who revealed Himself to rebellious man in the Person of His only Son Jesus Christ—told us the story of our creation. Those Scriptures do not contradict observable science. While God has always existed, the universe began when He created it. Colossians 1:16–17 (like many other Scriptures) asserts that Jesus Christ created all things. “All things were made by him; and without him was not anything made that was made” (John 1:3).

The same Christ that created us also came to earth as a man, suffered and died for the sinful rebellion of mankind, rose again to life in victory over sin and death, and made His forgiveness freely available (Hebrews 2:9–10).

Previous Paper War or Peace? The Evolutionary History of Human Nature Next Article Monogamy: Is It Rooted in an Evolutionary Past?