War or Peace? The Evolutionary History of Human Nature

War erupts between anthropologists over the true past of primitive people.

Much ink has been spilled in support of a bloody, war-like past in the evolutionary history of humanity. War is here defined as “banding together in groups to kill people in other populations” and has clear political connotations. A study by anthropologists Douglas Fry and Patrik Söderberg expressing a completely different version of mankind’s evolutionary history threatens to return anthropologists to the arena to settle their differences.

Books like The World Until Yesterday by Jared Diamond and The Better Angels of Our Nature by Stephen Pinker describe the primitive hunter-gatherer human, whom many evolutionary anthropologists consider the best model of pre-agricultural early man, as innately warlike. The common evolutionary view expressed by writers like these is that violence and war evolved with humanity. The “brutal savage,” according to Harvard evolutionary anthropologist Richard Wrangham and others, was only living out his violent heritage derived from his evolutionary forebears—the common ancestor shared with chimpanzees. Wrangham thinks the violence seen among chimpanzees is a better human evolutionary model than modern hunter-gatherer tribal people, but he still holds that early evolving humans were innately war-like.

Anthropologists Fry and Söderberg of Åbo Akademi University in Vasa, Finland, reporting in the July 19, 2013, Science, express a much different point of view. They examined the recent history of 21 modern mobile hunter-gather tribal groups. Of the 148 acts of violence among these tribes, most were personal acts of revenge or jealousy, with only a third being war-related. “When we looked at all the violent events about 55 per cent of them involved one person killing another. That’s not war,” Fry says. “When we looked at group conflicts, the typical pattern was feuds between families and revenge killings, which is not war either.”1

Of the tribes they sampled, only the Australian Tiwi people ranked as habitually war-like in their estimation. Wars of the Tiwi accounted for a whopping 69 of the 148 violent deaths in the study. 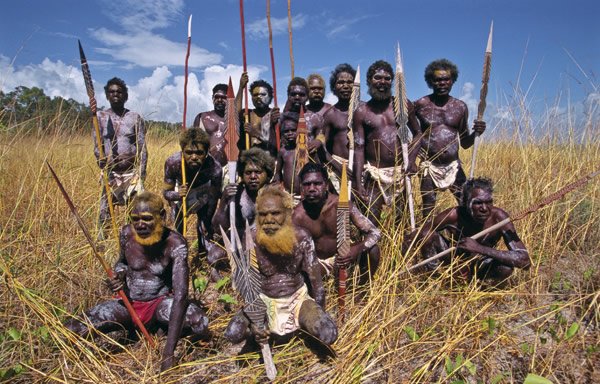 Australia’s Tiwi people were the most violent mobile hunter-forager groups in the latest study suggesting that humanity’s evolutionary roots were less violent than previously thought. However, while all people—including the Tiwi and the person in your mirror—have a sinful nature, our rebellious and sometimes violent tendencies have nothing to do with evolution. The Bible explains that we are all sinners (Romans 3:23) who like our first parents Adam and Eve rebel against God. The solution to our sin, our neighbors’ sin, and the Tiwi’s sin problem also has nothing to do with evolution but with the salvation freely available through Jesus Christ. Image: copyright Bill Bachman/Alamy through www.sciencenews.org.

Fry and Söderberg extrapolated their findings to draw conclusions about evolving humanity’s early pre-agricultural days. “It has been tempting to use these [modern] mobile foraging societies as rough analogies of the past and to ask how old warfare is and whether it is part of human nature. Our study shows that war is obviously not very common.”2

Anthropologist R. Brian Ferguson of Rutgers University in Newark, New Jersey, says, “Fry and Söderberg go against the popular tide in science . . . and win hands down.” However, eruptions from supporters of the standard evolutionary model dispute the “peaceful primitive” they paint on a variety of grounds.

Wrangham supports the idea that war-like behavior among chimpanzees is a much better model for early man. In 2012 he published a paper proposing the “chimpanzee-based lethal raiding model, asserting that ‘humans evolved a tendency to kill members of other groups.’”3 Wrangham says that the authors of the new study also ignored data on modern hunter-gatherers—including some tribes in the study—documenting high homicide rates from the period prior to the window they targeted.

“Fry and Söderberg use the hunter-gatherer record inappropriately to push the idea that because many modern hunter-gatherers were not seen to have war, ancestral hunter-gatherers also did not often have war,” Wrangham says. He also points out that modern “primitives” are poor models for early evolving human hunter-gatherers because such groups today are more scattered, have agricultural neighbors, and are exposed to other modern influences that may alter their behavior.

Economist Samuel Bowles of New Mexico’s Santa Fe Institute criticizes Fry and Söderberg for cherry-picking comparatively peaceful tribes. Bowles did an analysis of eight violent groups in 2009, but seven of these were not represented in Fry and Söderberg’s sample. Furthermore, some tribes, including the Tiwi—the most violent group in this study and the only one of Bowles’s group represented here—live where government police or military personnel limit conflict, skewing the results still further.

Other anthropologists, such as Penn State’s George Chaplin, point out that war or peace may have been the result of factors having little to do with human nature—factors like population density, availability of resources, and the invention of the bow.

And while Pinker and Diamond of course lobby for their own concept of the “brutal savage” in favor of the “peaceful primitive,” Stephen Cory of Survival International accuses both of them of relying on discredited work by anthropologist Napoleon Chagnon to portray past people as far worse than the present variety. Cory says Pinker “selects highly questionable data”4 to support his position. Cory considers both Diamond’s and Pinker’s work to be “pseudo-scientific.”5

“The vast majority of us assume that war is ancient, that it’s part and parcel of human nature,” contends Fry. “These types of perceptions have very strong influences on what goes on in current-day society. There’s so much discussion of killing and raiding,” he says, that we ignore the historical mechanisms for mediating conflict that he believes every early society had. “Perhaps the main selection pressure was on not killing,” Fry suggests, adding that perhaps the tendency to war is not in our biology, but our sociology.

Factors That Should Be Considered

All the contestants in this battle over the evolutionary underpinnings of war base their ideas on a false foundation: the idea that mankind gradually evolved from ape-like ancestors. In this view primitive people were less evolved and less intellectual than modern man. They furthermore assume that naturalistic processes have been the only factors to shape human nature.

Evolutionary anthropologists generally consider the “hunter-gatherer” to represent the more “primitive” condition of evolving humanity. But this view is false. Biblical history describes Adam’s first “job” to be tending the garden that God provided, and Adam’s sons kept flocks and tilled the ground (Genesis 4:2–3). Genesis chapter 4 describes the establishment of a city, so we see that the hunter-gatherer lifestyle was not the original condition of mankind. Following the global Flood, farming resumed as Noah planted a vineyard (Genesis 9:20). We learn of a hunter named Nimrod (Genesis 10:9) about the time of the building of the Tower of Babel, and it is likely that once people dispersed from Babel the foraging/hunting lifestyle became a necessary expedient for many. But such a lifestyle was not a symptom of evolutionary or intellectual inferiority.

Because of the sin of humans, death and violence entered this world, corrupting not only all their descendants but even the animals in the world.

Ironically, Harvard’s Richard Wrangham notes that modern hunter-gatherers may be a poor model for humanity’s past but considers violent chimpanzees to be a good one. The influence of modern neighbors is a factor for which scientists cannot control in studies like these, but at least modern people are all equally human. Humans were created the same day as apes but not from apes. Humans started their history as two sinless people made in the image of God. They—not chimps—rebelled against God. Because of the sin of humans, death and violence entered this world, corrupting not only all their descendants but even the animals in the world. Humans don’t fight because chimps and ancestral apes fight; on the contrary, chimps are violent for the same reason other animals are violent: because mankind’s sin brought violence into the good world God had made, as described in Romans 8:18–25.

It did not take long for Adam’s rebellion against God to wreak havoc on early humans, for the Bible records that Adam’s son Cain murdered his brother Abel due to jealousy. Growing violence is described in the life of Cain’s fifth-generation descendant Lamech (Genesis 4:23–24). Prior to the global Flood, less than 1,700 years after Adam’s sin and Cain’s murder of Abel, the earth was “filled with violence” (Genesis 6:11–13). We do not need evolutionary presumptions to make guesses about man’s rebellious sinful nature and horrid history of homicides and wars. God has told us the truth about our bloody past in the Bible. Thankfully, He has also told us how Jesus Christ entered this violent world and endured a dreadful death in order to secure forgiveness and an eternally peaceful future for us through His sacrifice. Read more about the salvation Christ offers in the gospel.

Previous Article Special Report: West Nile Virus—Will It Strike the States Hard Again? Next Article Are We One of Many, or Did God Design the Universe with Physics That Actually Works?