Resistant rootworms can ravage corn if farmers put all their eggs in a genetically modified high-tech basket.

Built-in pesticides—toxins whose production is genetically encoded in the genome of three-fourths of America’s corn crop—is losing the battle against the western corn rootworm. Deemed to have developed “field-evolved resistance,” the corn rootworm actually illustrates the principles of natural selection—not evolution—as are also evident when rampant antibiotic resistance rears its ugly head.

Agriculture Then and Now

Before Adam sinned, he was responsible for the care of a very good garden. After he sinned, God judged him with a curse recorded in Genesis 3:17–19. Adam found the nature of agriculture had changed. And so it has been ever since.

As people throughout history have worked to produce more food more efficiently, they have learned a number of helpful strategies. One of the simplest and most effective is crop rotation. Since ancient times many cultures have seen that crops generally grow better when alternated.

Just six years after its introduction, genetically modified crops began to suffer damage due to rootworms resistant to Bt toxin Cry3Bb1, the first to be used. Two years later, these same rootworms also became resistant to the toxin mCry3A. Entomologist Aaron Gassmann of Iowa State University in Ames, whose analysis of the problem “Field-evolved resistance by western corn rootworm to multiple Bacillus thurinigiensis toxins in transgenic maize” was just published in the Proceedings of the National Academy of Sciences, says, “That’s two of the three toxins on the market now. It’s a substantial part of the available technology.”

Similarly, entomologist Lance Meinke of University of Nebraska-Lincoln has conducted similar tests in Nebraska fields with crop damage. He ruled out other causes of crop damage and confirmed resistance patterns in rootworms. “When a few of the rootworms survive the Bt corn trait, they reproduce larger numbers of survivors and then the number of individuals in that population that can survive exposure to the Bt trait continues to expand,” Meinke explains. “Resistance doesn't mean the entire field will be a failure. Typically, this scenario begins with just a few survivors and it takes several years for the resistant proportion of a population to increase. That means the level of control the Bt corn hybrid provides in that field may decline over time as more rootworms survive exposure to the Bt trait.”

Some western corn rootworms are equipped with the genetic arsenal to survive eating Bt toxins. Because only 98 percent of a typical western corn rootworm population are killed after exposure to the amount of Bt toxin typically produced by corn, the two percent that survive are able to produce more resistant rootworms, ending up with a population that has a field day with valuable crops.

Resistance hasn’t been a problem for more vulnerable pests, like the European corn borer, against which Bt toxins are 99.99 percent effective. But in Iowa, rootworm resistance to Bt toxin developed in just 3.6 years in fields where farmers no longer practice crop rotation. The generation time of the rootworm is one year, so entomologists conclude that resistant populations can emerge in just 3.6 generations. A similar pattern has emerged in Nebraska, with the worst pest problem in fields in which the genetically modified corn has been planted year after year. 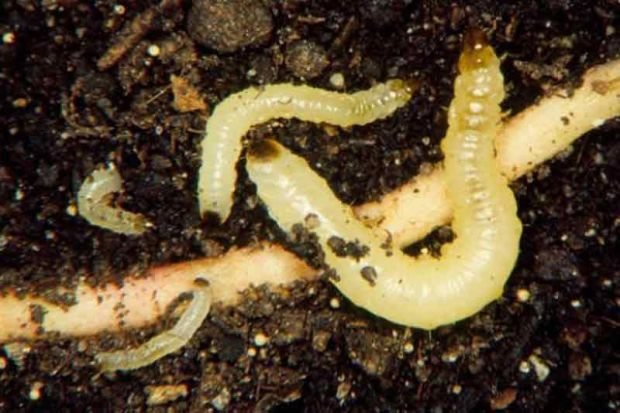 The three larval stages of the western corn rootworm. Image by J. A. Kalisch/University of Nebraska-Lincoln, via Farm & Ranch Guide.2 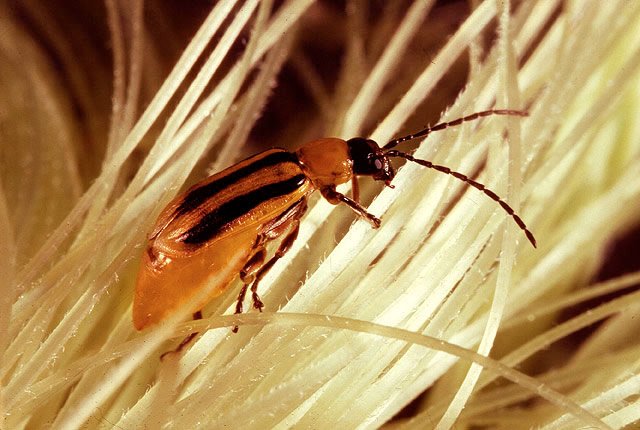 The resistance problem is compounded by the fact, Gassmann has found, that two of the toxin molecules—the two to which resistance has already developed—share some structural similarities and therefore bind to some of the same sites in the rootworm gut. By “pyramiding” Bt toxins that are structurally dissimilar, companies that supply genetically modified corn to farmers hope to avoid developing resistant populations. However, Gassmann and Meinke emphasize that farmers should not rely exclusively on Bt toxin to protect their crops. Such high-tech tools should be part of an integrated solution. Farmers using the genetically modified seed corn should not abandon the basics—crop rotation.

Crop rotation, alternating corn with soybeans, may help nip the problem in the bud. Rootworm resistance to Bt toxins is not epidemic in Nebraska, but Iowa corn crops have already been significantly damaged. If farmers do not begin integrating various pest control techniques, the problem is likely to snowball. “We need to understand that it takes millions of dollars and as long as 10 years to develop a new corn transgenic trait,” Meinke says. “That means, if we lose the technology in our current Bt hybrids, we won't necessarily have a new one to replace it.”

“Crop rotation is the best tool,” explains Meinke. “Generally, one year of soybeans in a field with resistant western corn rootworms wipes out that population. The beetles will lay eggs that hatch, but when larvae try to feed on soybean plants, they don’t find the nutrients they need and they die.” He advises combining crop rotation with genetically modified corn that pyramids multiple toxins. “In continuous corn, moving away from single trait Bt hybrids to pyramided trait hybrids (i.e. two or more Bt traits expressed in a hybrid that target the same pest) provides a high level of rootworm control and better resistance management,” Meinke says. “Resistance will likely evolve more slowly to a pyramid hybrid than a single trait hybrid because the insect population has to overcome two Bt traits and not just one.”

Gassmann also suggests that future genetically modified toxin-producing corn be engineered to produce larger amounts of toxin in hopes of eradicating virtually all the pests that eat it. Nevertheless, as with antibiotic resistance when highly resistant “super-bug” populations emerge through natural selection of only the hardiest pathogens, if those rootworms do survive newer, more highly toxic corn, they could produce the super-rootworm populations of tomorrow.

Rootworms that survive Bt toxin and go on to produce resistant populations already possess the genetic information that enables them to resist the toxin. They do not have to “evolve” anything new. The variations in their genome that equip them to survive can be passed on to their offspring. This process illustrates natural selection, not any sort of upward evolutionary process.

Furthermore the resistant rootworms are still just rootworms. They do not evolve into any new, more complex kind of organism. Like antibiotic resistance, this is a case in which the “E” word is being used in a context that has absolutely nothing to do with molecules-to-man evolution.