How Many People Built the Ark?

Wasn't the ark built by Noah and his family? Why does the Ark Encounter website show more people? Tim Chaffey, AiG–U.S., explains.

Ever since we announced the plans to build a full-sized ark in northern Kentucky, we have received a “flood” of inquiries. As you can imagine, questions have come from excited supporters, ardent skeptics, and others who are somewhere in between these groups. As we mentioned in last week’s article, our plan is to regularly address the numerous questions and concerns raised about the Ark Encounter project, as well as about the real Noah’s Ark and global Flood described in God’s Word.

Did Eight People Build the Ark?

Several people have asked why some of our promotional artwork has depicted more than eight people involved in constructing Noah’s Ark since the Bible seems to indicate that the Ark was built by Noah and his family. As we will see, Scripture does not explicitly state this. It is true that only eight people were on board the Ark during the Flood. Genesis 7:13 states, “On the very same day Noah and Noah’s sons, Shem, Ham, and Japheth, and Noah’s wife and the three wives of his sons with them, entered the ark.” This number is confirmed by the Apostle Peter in the New Testament, who stated that only “eight souls” were saved from the Flood (1 Peter 3:20; see also 2 Peter 2:5).

Genesis also reveals that mankind was extremely wicked in the days before the Flood. “Then the Lord saw that the wickedness of man was great in the earth, and that every intent of the thoughts of his heart was only evil continually” (Genesis 6:5). Several verses later, we are told, “The earth also was corrupt before God, and the earth was filled violence. So God looked upon the earth, and indeed it was corrupt; for all flesh had corrupted their way on the earth” (Genesis 6:11–12).

Sandwiched between these two passages is a brief description of Noah, who found grace in the eyes of the Lord. He is also described as a just man who walked with God and was blameless in his time (Genesis 6:8–9).

Construction Crew for the Ark

The Ark Encounter picture of the Ark’s construction depicts roughly two dozen people building the boat. There are a couple of possibilities as to who these people could have been.

First, they could have been additional family members. Although Genesis mentions Noah’s sons, Shem, Ham, and Japheth, it does not tell us about his extended family. He may have had many brothers and sisters who might have been willing to help with the project. The genealogy in Genesis 5 lists the age of each of Noah’s ancestors when his son of record was born and at his death. It is interesting to note that Methuselah (Noah’s grandfather) died in the year the Flood started and Lamech (Noah’s father) died five years before that. So they may have helped with the construction of the Ark. However, in our picture the Ark is nearly complete, so it is unlikely that these men were involved at this point in the construction. 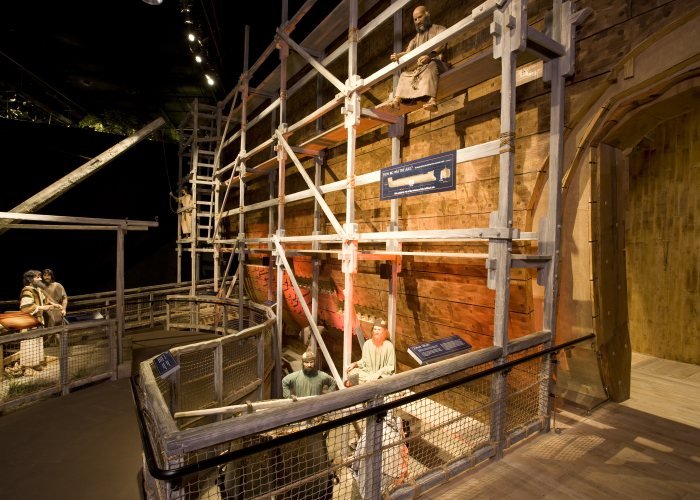 The Creation Museum’s depiction of the Ark’s construction shows at least eight men involved in the work.

Another possibility is that Noah hired people to help him build the Ark. The Bible does stress the wickedness of man prior to the Flood, but just like today, ungodly people may have been willing to work for a godly man. Answers in Genesis had several unbelieving contractors who helped at different stages of the Creation Museum’s construction, and we praise God that we had opportunities to witness to them and that some of them trusted in Christ. As a preacher of righteousness (2 Peter 2:5), Noah could have used this opportunity to proclaim God’s message to unbelievers working for him.

There is also a possibility that Noah employed the use of animals for hauling and lifting heavy loads or other purposes. He may have also had access to sophisticated mechanisms and technology that people have not considered.

The fact of the matter is that the Bible does not limit the number of people who worked on the Ark. While we would not be dogmatic on this point, it is consistent with God’s Word to believe that more than eight people were involved in the Ark’s construction.

Please be sure to check out the Ark Encounter website to find out how you can partner with us to build a full-scale Ark in northern Kentucky designed to proclaim the soul-saving gospel of Jesus Christ.

Previous Article Can We See the Surfaces of Stars? Next Article Feedback: Deeply Saddened over Old-Earth Compromise