Whoops! Two or more species from one kind! Isn’t that evolution?

Some evolutionists certainly think so. After I participated in a creation-evolution debate at Texas A & M, a biology professor got up and told everyone about the flies on certain islands that used to interbreed but no longer do. They’ve become separate species, and that, he said, to a fair amount of applause, proves evolution is a fact—period!

Well, what about it? Barriers to reproduction do seem to arise among varieties that once interbred. Does that prove evolution? Or does that make it reasonable to extrapolate from such processes to real evolutionary changes from one kind to others? As I explained to the university-debate audience (also to applause), the answer is simply no, of course not. It doesn’t even come close.

Any real evolution (macroevolution) requires an expansion of the gene pool, the addition of new genes (genons) with new information for new traits as life is supposed to move from simple beginnings to ever more varied and complex forms (“molecules to man” or “fish to philosopher”). Suppose there are islands where varieties of flies that used to trade genes no longer interbreed. Is this evidence of evolution? No, exactly the opposite. Each variety resulting from reproductive isolation has a smaller gene pool than the original and a restricted ability to explore new environments with new trait combinations or to meet changes in its own environment. The long-term result? Extinction would be much more likely than evolution.

Of course, if someone insists on defining evolution as “a change in gene frequency,” then the fly example “proves evolution”—but it also “proves creation,” since varying the amounts of already-existing genes is what creation is all about (Figure 22). 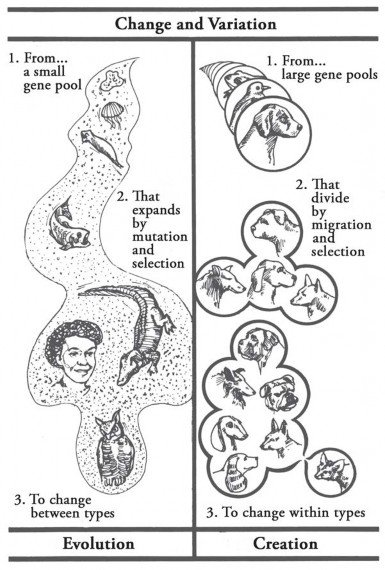 Figure 22. Change? Yes—but which kind of change? What is the more logical inference, or the more reasonable extrapolation, from our observations: unlimited change from one kind to others (evolution), or limited variation within kinds (creation)? Given the new knowledge of genetics and ecology, even Darwin, I believe, would be willing to “think about it.”

If evolutionists really spoke and wrote only about observable variation within kind, there would be no creation-evolution controversy. As you know, textbooks, teachers, and television “docudramas” insist on extrapolating from simple variation within kind to the wildest sorts of evolutionary changes. Of course, as long as they insist on such extrapolation, creationists will point out the limits to such change and explore creation, instead, as the more logical inference from our scientific observations. All we have ever observed is what evolutionists themselves call “subspeciation” (variation within kind), never “transspeciation” (change from one kind to others) (Figure 22).

Perhaps each created kind is a unique combination of non-unique traits. Look at people, for instance. Each of us has certain traits that we may admire (or abhor): brown hair, tall stature, or even a magnificent nose like mine. Whatever the trait, someone else has exactly the same trait, but nobody has the same combination of traits that you do or I do. Each of us is a unique combination of non-unique traits. In a sense, that’s why it’s hard to classify people. If you break them up according to hair type, you’ll come out with groups that won’t fit with the eye type, and so on. Furthermore, we recognize each person as distinct.

We see a similar pattern among other living things. Each created kind is a unique combination of traits that are individually shared with members of other groups. The platypus (Figure 9), for example, was at first considered a hoax by evolutionists, since its “weird” set of traits made it diﬃcult even to guess what it was evolving from or into. Creationists point out that each of its traits (including complex ones like its electric location mechanism, leathery egg, and milk glands) is complete, fully functional, and well-integrated into a distinctive and marvelous kind of life.

Perhaps God used a design in living things similar to the one He used in the non-living world. Only about a hundred diﬀerent elements or atoms are combined in diﬀerent ways to make a tremendous variety of non-living molecules or compounds. Maybe creationists will one day identify a relatively few genes and gene sets that, in unique combinations, were used to make all the diﬀerent types of life we see. It would take a tremendous amount of research to validate this “mosaic or modular” concept of a created kind, but the results would be a truly objective taxonomy that would be welcomed by all scientists, both creationists and evolutionists. We might even be able to write a “genetic formula” for each created kind, as we can write a chemical formula (a unique combination of non-unique atoms) for each kind of compound.

Why should we be able to classify plants and animals into created kinds or species at all? The late Stephen Gould,1 famed evolutionist and acrimonious anti-creationist, wrote that biologists have been quite successful in dividing up the living world into distinct and discrete species. “But,” said Gould, “how could the existence of distinct species be justified by a theory [evolution] that proclaimed ceaseless change as the most fundamental fact of nature?” For an evolutionist, why should there be species at all? If all life forms have been produced by gradual expansion through selected mutations from a small beginning gene pool, organisms really should just grade into one another without distinct boundaries. Darwin also recognized the problem. He finally ended by denying the reality of species. As Gould pointed out, Darwin was quite good at classifying the species whose ultimate reality he denied. And, said Gould, Darwin could take no comfort in fossils, since he was also successful in classifying them into distinct species. He used the same criteria we use to classify plants and animals today.

In one of the most brilliantly and perceptively developed themes in his book Evolution: A Theory in Crisis, Denton2 shows how leaders in the science of classification, after a century of trying vainly to accommodate evolution, are returning to, and fleshing out, the creationist typological concepts of the pre-Darwinian era. Indeed, the study of biological classification was founded by Karl von Linné (Carolus Linnaeus) on the basis of his conscious and explicit biblical belief that living things were created to multiply after kind, and that these created kinds could be rationally grouped in a hierarchical pattern reflecting themes and variations in the Creator’s mind. If evolution were true, says Denton, classification of living things ought to reflect a sequential pattern, like the classification of wind speeds, with arbitrary divisions along a continuum (e.g., the classification of hurricanes into categories 1, 2, 3, 4, and 5 along a wind speed gradient). In sharp contrast, living things fit into distinctly bounded hierarchical categories, with each member “equi-representative” of the group, and “equidistant” from members of other defined groups.

“Actually,” concluded Gould, “the existence of distinct species was quite consistent with creationist tenets of a pre-Darwinian era” (emphasis added). I would simply like to add that the evidence is also quite consistent with the creationist tenets of the present post-neo-Darwinian era. In Darwin’s time, as well as the present, “creation” seems to be the more logical inference from our observations.

The collapse of neo-Darwinism has sparked interest in creation among secular intellectuals, leading to the influential movement now called “Intelligent Design” or ID. ID spokesmen present evidence for intelligent design without tying it to the Bible or any other overtly religious position. ID gained worldwide notoriety with Darwin on Trial in which a prestigious law professor from the University of California at Berkeley, Phillip Johnson,3 demonstrated that Darwinian evolution was based on so many errors in logic and violations of the rules of evidence that it represented little more than a thinly veiled apologetic for philosophic naturalism. Books and visuals by Jonathan Wells show that popular Icons of Evolution4 still used in textbooks, museum displays, and television programs were discredited scientifically years ago.

ID took the scientific oﬀensive with Darwin’s Black Box5 in which biochemist Michael Behe pointed to “irreducible complexity” in DNA and numerous subcellular “molecular machines” and interactive physiological systems as powerful evidence both (1) falsifying the Darwinian concept of step-by-step evolution that requires survival rewards at each step, and (2) supporting the concept that multiple parts, each functionless until organized as a whole, require plan, purpose, and intelligent design. Other ID publications and productions press the point for secular audiences.6

It’s no wonder that in recent times evolutionists have left the defense of evolution largely to lawyers, judges, politicians, educators, the media, and the clergy, NOT to scientists. Even secular and agnostic scientists are becoming creationists!

The evidence is forcing secular scientists to admit the severe inadequacy of mutation-selection, but these same processes are being picked up and used by creationists. What would Darwin say about that? A man as thoughtful and devoted to detail and observation as Darwin was would surely be willing to “think about it.”