Answer: “Yes, indeed; no problem!” I get some help here from an unexpected source, evolutionist Francisco Ayala.1 He says that human beings are “heterozygous” for 6.7 percent of their genes on the average. That means that 6 or 7 times in 100, the pair of genes for a given trait diﬀer, like the genes for free or attached ear lobes, or for rolling or not rolling the tongue. Now this may not seem like much, but Ayala calculates a single human couple with just “6.7 percent variety” could produce 102017 children (mathematically, not physically!) before they would run out of variation and have to produce an identical twin. That’s a 1 followed by 2,017 zeroes! The number of atoms in the known universe is a mere 1080, nothing at all compared with the variety that is present in the genes of just two human beings!

Take human skin color, for example. First of all, it may surprise you to learn that all of us (except albinos) have exactly the same skin-coloring agent. It’s a protein called melanin. We all have the same basic skin color, just diﬀerent amounts of it. (Not a very big diﬀerence, is it?) How long would it take to get all the variation in the amount of skin color we see among people today? A million years? No. A thousand years? No. Answer: just one generation!

Let’s see how that works. The amount of skin color we have depends on at least two pairs of genes. Let’s call these genes A and B. People with the darkest skin color have genes AABB as their genotype (set of genes for a trait); those with very light skins have aabb. People with two “capital-letter” genes would be “medium-skinned,” and those with one or three such genes would be a shade lighter or a shade darker.

Suppose we start with two medium-skinned parents, AaBb. Figure 20 is a genetic square that shows the gene combinations in the children they could have. Less than half (only 6 of the 16 combinations) would be medium-skinned like their parents. Four each would be a shade darker or lighter. One in 16 of the children of medium-skinned parents (AaBb) would have the darkest possible skin color (AABB), while the chances are also 1 in 16 that a brother or sister will have the very lightest skin color (aabb). (For details, see Parker, Reynolds, and Reynolds.2) 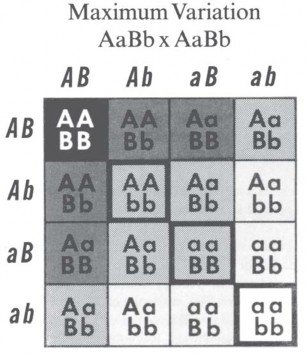 Figure 20. All human beings have the same basic skin-color agent (melanin), just different amounts of it. From parents created with medium skin color as diagrammed, all the variation we see today could be produced in just one generation. In the same way, plants and animals created with a mixture of genes could have filled all of the earth’s ecologic and geographic variety. As people break up into groups, however, some groups would develop limited variability—only dark, only medium, or only light as indicated.

The Bible doesn’t tell us what skin color our first parents had, but, from a design point of view, the “middle” makes a great beginning. Starting with medium-skinned parents (AaBb), it would take only one generation to produce all the variation we see in human skin color today. In fact, this is the normal situation in India today. Some Indians are as dark as the darkest Africans, and some—perhaps a brother or sister in the same family—as light as the lightest Europeans. I once knew a family from India that included members with every major skin color you could see anywhere in the world. The TV news in early 2006 showed fraternal twins born to parents of medium skin tone; one twin was quite dark and one was quite light.

Now let’s see what happens when human beings are separated into isolated groups by barriers such as geography, culture, or language (such as at the Tower of Babel in Gen. 11). If those with very dark skins (AABB) migrate into the same areas and/ or marry only those with very dark skins, then they only have capital A and B genes to pass on and all their children will have very dark skins. Similarly, parents with very light skins (aabb) can have only very light-skinned children, since they have only a and b genes to pass on.

Even certain medium-skinned parents (AAbb or aaBB ) can get “locked-in” to having only medium-skinned children, like the Orientals, Polynesians, and my ancestors, the Native Americans. Each AAbb parent, for example, will pass on one A and one b, so the children of Ab egg and sperm cell union will all be AAbb, like their parents.

Where people with diﬀerent skin colors get together again (as they do in the West Indies, for example), you find the full range of variation again—nothing less, but nothing more either, than what we had at the beginning. Clearly, all this is variation within kind.

There are at least four skin color genes in the human gene pool: A, a, B, b. That total human gene pool for skin color can be found in just one person with medium skin color (AaBb), or it can be “spread around” among many people with visibly diﬀerent skin colors. In fact, the gene frequencies (percents of each gene) in one AaBb medium-skinned person are exactly the same as the gene frequencies in the 16 children that show five diﬀerent amounts of skin color. All that individual variation occurs in a group that remains constant: creation and variation within the created kind!

The tendency for gene percentages to remain the same, generation after generation, is expressed mathematically as the Hardy-Weinberg law. For evolutionists, this fundamental law of population genetics represents resistance to change, and might be called genetic inertia. Creationists could call it the law of conservation of genetic variability instead, and see it as a way to define mathematically both the constancy of the group and the individual diﬀerences that characterize “variation within kind.”

Geneticists call the shuﬄing of pre-existing genes recombination. Perhaps you’ve played a game with the common deck of 52 cards that includes four groups (hearts, diamonds, clubs, and spades), each with 13 diﬀerent numbers or “faces” (2–10, plus J, Q, K, A). In one game, called “bridge,” each of four players gets a “hand” of 13 cards. You can play bridge for 50 years (and some people do!) without ever getting the same group of 13 cards! The “hands” you are dealt are constantly changing, and each is unique—but the deck of cards remains always the same.

What happened as the descendants of medium-skinned parents produced a variety of descendants? Evolution? Not at all. Except for albinism (the mutational loss of skin color), the human gene pool is no bigger and no diﬀerent now than the gene pool present at creation. As people multiplied, the genetic variability built right into the first created human beings came to visible expression. The darkest Nigerian and the lightest Norwegian, the tallest Watusi and the shortest Pygmy, the highest soprano and the lowest bass could have been present right from the beginning in two quite average-looking people. Great variation in size, color, form, function, etc., would also be present in the created ancestors of all the other kinds (plants and animals) as well.

Evolutionists assume that all life started from one or a few chemically evolved life forms with an extremely small gene pool. For evolutionists, enlargement of the gene pool by selection (struggle and death) among random mutations is a slow, tedious process that burdens each type with a “genetic load” of harmful mutations and evolutionary leftovers. Creationists assume each created kind began with a large gene pool, designed to multiply and fill the earth with all its tremendous ecologic and geographic variety, so no struggle and death or long time need be involved at all.

Neither creationist nor evolutionist was there at the beginning to see how it was done, but at least the creationist mechanism works, and it’s consistent with what we observe. The evolutionist assumption doesn’t work, and it’s not consistent with what we presently know of genetics and reproduction. As a scientist, I prefer ideas that do work and do help to explain what we can observe, and that’s creation!

According to the creation concept, each kind starts with a large gene pool present in created, probably “average-looking,” parents. As descendants of these created kinds become isolated, each average-looking (generalized) type would tend to break up into a variety of more specialized descendants adapted to diﬀerent environments. Thus, the created ancestors of dogs, for example, have produced such varieties in nature as wolves, coyotes, and jackals. Human beings, of course, have great diversity, too. As the Bible says, God made of “one blood” (or one gene pool) all the “tribes and tongues and nations” of the earth (Figure 21). When asked about race on my census form, I checked “Other” and wrote in “Human”; there’s only one race, the human race, and we’re all parts of it (Acts 17:26).3 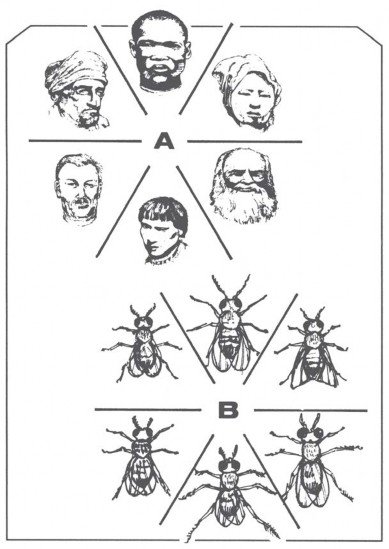 Figure 21. Descendants of created kinds tend to break up into different varieties. Even varieties that no longer interbreed (B) can be recognized as the same kind because they possess only alternate forms (alleles) of the same genes. The existence of distinct types, both living and fossil, said Harvard’s Stephen Gould, “fit splendidly with creationist tenets of a pre-Darwinian era.” Although Gould rejected creation, the facts seem to me to fit creation in our present “post-neo-Darwinian era” just as well.

Varieties within a created kind have the same genes (genons), but diﬀerent percentages of various alleles. Diﬀerences from average allele percentages can come to expression quickly in small populations (a process called genetic drift). Take the Pennsylvania Amish, for example. Because they are descendants of only about 200 settlers, the founders, who tended to marry among themselves, they have a greater percentage than their ancestors of genes for short fingers, short stature, a sixth finger, and a certain blood disease.

All the diﬀerent varieties of human beings can, of course, marry one another and have children. Many varieties of plants and animals also retain the ability to reproduce and trade genes, despite diﬀerences in appearance as great as those between St. Bernards and Chihuahuas. Varieties of one kind may also lose the ability to interbreed with others of their kind. For example, fruit flies multiplying through Central and South America have split up into many subgroups (Figure 21). Since these subgroups no longer interbreed, each can be called a separate species.