Mathematical Solution to the Mystery of Animal Ornamentation

“Grandfather Scarab, what big horns you have! Don’t they get in the way?” says the young beetle.

“They do,” Grandfather answers, “but the better to attract your grandmother!”

Big antlers, bright plumage, long feathers with sparkling peacock “eyes,” colorful dewlaps hanging from the throats of some lizards, large horns adorning the heads of animals like the lowly taurus scarab dung beetle—such ornamentation is found in the males of many species of animals. Ornamentation serves primarily to attract mates. But growing large ornamental structures takes a lot of energy, and often the ornaments that maximize visibility also make an animal more visible to predators or hinder quick escapes.

Ornamentation sometimes endangers an individual animal’s chance of survival. Just picture a male deer with its large rack of antlers stuck in a thicket!1 Therefore, natural selection—the shift in a population’s traits toward those that enhance survival—cannot explain either the development or the persistence of large ornamental structures in a population’s male members. And while impressive ornamentation clearly attracts mates, why would the females of a species prefer males with gaudy headdresses or other physical features, particularly those that handicap the males? After all, ornamentation would need to attract the preponderance of females for ornamentation to become the dominant variation among the males of a species through sexual selection.

Scientists from Northwestern University’s Department of Engineering Sciences and Applied Mathematics have developed a mathematical model that may help explain these ornamental mysteries. Their model is a quantitative representation of Zahavi’s handicap principle, which was first proposed in 1975. Zahavi’s handicap principle intuitively suggests how the interplay of natural and sexual selection could produce a preponderance of highly ornamented males within a species.

Moreover, the males of many species—including the horned scarab beetle—come in both elaborately ornamented and virtually unadorned versions, but not in in-between forms. This curious fact is also predicted by the Northwestern team’s work, suggesting their model may be correct. 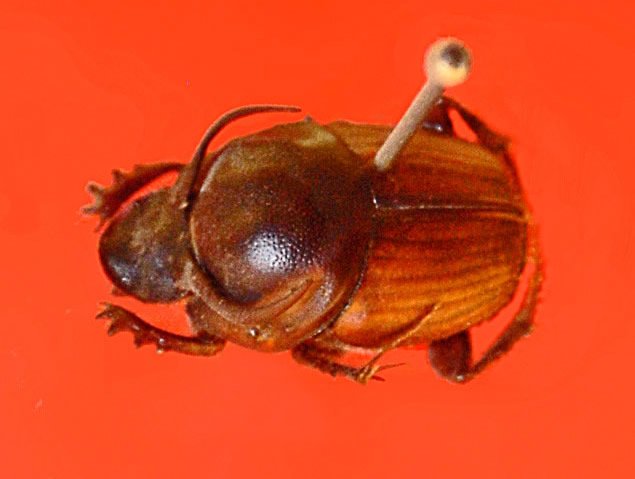 This is a male horned scarab beetle, Onthophagus taurus. Its large horns can reach 11 millimeters in length, and it uses them to fight its fellow horned beetles for mates. However, a significant population of this species has only tiny nubs where the large horns would be. Those males manage to survive and reproduce without competing and fighting with their brawny cousins. Image by Hectonichus, via Wikimedia Commons.

Zahavi’s handicap principle, authors of the study published in Proceedings of the Royal Society B, “argues that, because costly ornaments hinder survival, only the highest quality individuals can afford significant investment in them. Thus, the cost (often correlated with size) of an ornament truthfully advertises the quality of an individual, which makes mate selection easier.”2

In other words, the healthiest, most robust specimens tend to carry around the most impressive decoration—possibly because they are best able to spare the energy to produce them. Therefore, females that are attracted to them tend to produce statistically healthier young. And the generations they produce carry the genetic variations for highly decorated males.

Intuitive as Zahavi’s principle might be, no one until now has successfully come up with a way to quantitate and therefore test its accuracy. The equation developed by Northwestern’s Daniel Abrams, who led the research, accounts for the variations in a population, predicting how they might change over time until they reach a steady state. Their equation includes variables to account for the health and reproductive potential of males in comparison to the size of their ornamentation, the tendency of females to select males with the most impressive displays, and the difference between the average and the maximal male ornamentation in a herd.

The model is completely independent of the underlying genetic mechanism that causes these ornaments to grow, which I find fascinating.

When the Northwestern team compared their equation to published population statistics for 15 different species of ornamented animals, they found that their mathematical model predicted the documented distribution of male ornamentation accurately. Their model works regardless of whether the mechanism producing the ornamentation is genetic, epigenetic, environmental, or completely unknown. “The model is completely independent of the underlying genetic mechanism that causes these ornaments to grow, which I find fascinating,” says coauthor Rosemary Braun. “It tells us that if you have these two competing forces, natural selection and sexual selection, two morphs, or subgroups, will emerge. The model is so general it can be applied to many different species and still have the same explanatory power.”3

Furthermore, the new model accurately predicts the curious tendency of the males in many species to cluster in two distinct groups—the highly ornamented and the unadorned. Abrams says, “Ornamentation does persist in nature, and our quantitative model reveals that a species can split into two subspecies as a result of the ornamentation battle that occurs over time.”4

Why does a distinct subset of unornamented males tend to develop, instead of a smooth continuum of males with ornaments of all sizes? “Animals with extravagant ornaments are showing just how fit and strong they are—that they can overcome the costs of these ornaments—and this attracts the opposite sex,” explains Abrams.5 But apparently the sexual appeal of large antlers and such only accrues to those animals that are robust enough to grow the largest ones, leaving those healthy members of a species that don’t spend any energy on ornamental décor as a population subset with plenty of reproductive potential and the energy to survive. Those males that expend a lot of energy growing ornaments of substandard size fail to attract the females that go for the more impressive models, and they evidently fall by the wayside, failing to maintain a presence in the gene pool.

Among horned scarab dung beetles, some males have long horns, while others have tiny nubs. (This is true of several scarab beetle species, including Onthophagus taurus, the beetle whose populations were examined by the Northwestern scientists.) The big-horned varieties use their horns to fight other beetles, and size typically wins. Beetles with only minimal horns survive as a separate and significant population quite nicely, especially—as a study of another scarab beetle species, Podischnus agenor, has suggested—if they avoid conflict with their big cousins by hatching, maturing, and mating at different times and places than the brawnier members of their species.6

Referring to the Northwestern study, lead author Sara Clifton says, “This is a study of evolution using mathematical biology—how sexual selection and natural selection play off each other and produce some of the strange things we see in the animal world.” She added, “The horned dung beetle from our study is a good example of how large horns really handicap the animal, yet they exist.”7

The scientists conclude that their model ratifies Zahavi’s handicap principle, indicating that it accurately describes the interplay of natural and sexual selection in ornamented populations. They write, “Owing to the presence of ornaments, we conclude that the evolutionary benefits of honest advertising must outweigh the net costs of ornamentation when the displays exist in nature.”8

The new mathematical model does seem to accurately represent the relative importance of natural selection and sexual selection in producing the observable patterns of ornamentation in animal populations. The model works without making any assumptions about the actual origin of or biological basis for the ornamentation. Nevertheless, the authors of the study still feel compelled to assume that “evolution” is the mechanism by which ornamentation develops.

In truth, the adorned and unadorned subsets of animal populations are only variations within certain species.

In truth, the adorned and unadorned subsets of animal populations are only variations within certain species. No animal evolves into another kind of animal by growing or shrinking fearsome headdresses or elaborate tail feathers. Neither natural selection nor sexual selection nor their interplay explains the origin of the genetic information to produce ornamentation. Instead, the interplay of these observable phenomena explains the way that existing genetic information can become expressed and distributed within a population of animals that reproduce only after their kinds, just as God created them to do.

Variation and speciation can occur fairly quickly and are often touted as examples of “evolution in action.” Shifts in the characteristics of a particular animal’s populations are observable in the present. They are explainable through ordinary genetic mechanisms, none requiring the animals to acquire the new genetic information required to become a different, more complex kind of animal. Thus, implications of headlines like “New Equation Explains Evolution” are excessively optimistic, allowing readers to incorrectly infer that the new equation demonstrates something about the Darwinian evolution of increasing biological complexity. It does not. In truth, this study only helps explain how one sort of variation occurs within a created kind. Variation among animals that reproduce only within their own kinds is exactly what we expect in the world that God created about 6,000 years ago, without evolution, during the Creation Week.

Previous Article Are Humans Evolving Through Caesarean Sections? Next Article Mystery Mammoth Points to a Global Flood and Ice Age