Evolution explains neither the peacock’s beauty nor its aerodynamic efficiency.

A peacock’s large train looks like it would be a real drag! To get such a burden airborne must surely take a lot of extra energy and slow a bird down, perhaps delaying its escape from a predator. But does it really? New research— “The elaborate plumage in peacocks is not such a drag,” published in the Journal of Experimental Biology—says “No!”

Like a lion’s mane, the peacock’s tail is considered a textbook example of sexual selection—an attention-getting flamboyant feature that optimizes a male’s ability to attract a mate. This supposedly gives the most impressive animal the best opportunity to pass its genes on to subsequent generations. The peacock spends 3% of its body’s energy each day for six months to build the large train—up to five feet long.1 And after the breeding season, the bird molts and loses the beautiful fan.

Unlike a lion’s mane, the peacock’s large train intuitively appears to present dangers to survival. How can such a huge fan not impair its ability to escape quickly? Darwinian thinkers have long puzzled over how such a liability could offer sufficient reproductive advantage to have evolved.

To determine the magnitude of this beautiful burden, Dr. Graham Askew of the University of Leeds School of Biomedical Sciences put the feathers—and the birds—to the test. Of course, he expected the feathers to significantly impede flight performance. A typical peacock train contains 150 to 200 long feathers!! Dr. Askew says, “These feathers weigh about 300 grams and can exceed 1.5 meters, so it's expected that the male birds would be making a significant sacrifice in their flight performance for being attractive—possibly giving up their lives if the train restricts escape from predators such as tigers and leopards in their natural environment.”2 That’s a 5-foot train weighing about 11 ounces on a bird weighing only about 10 pounds! 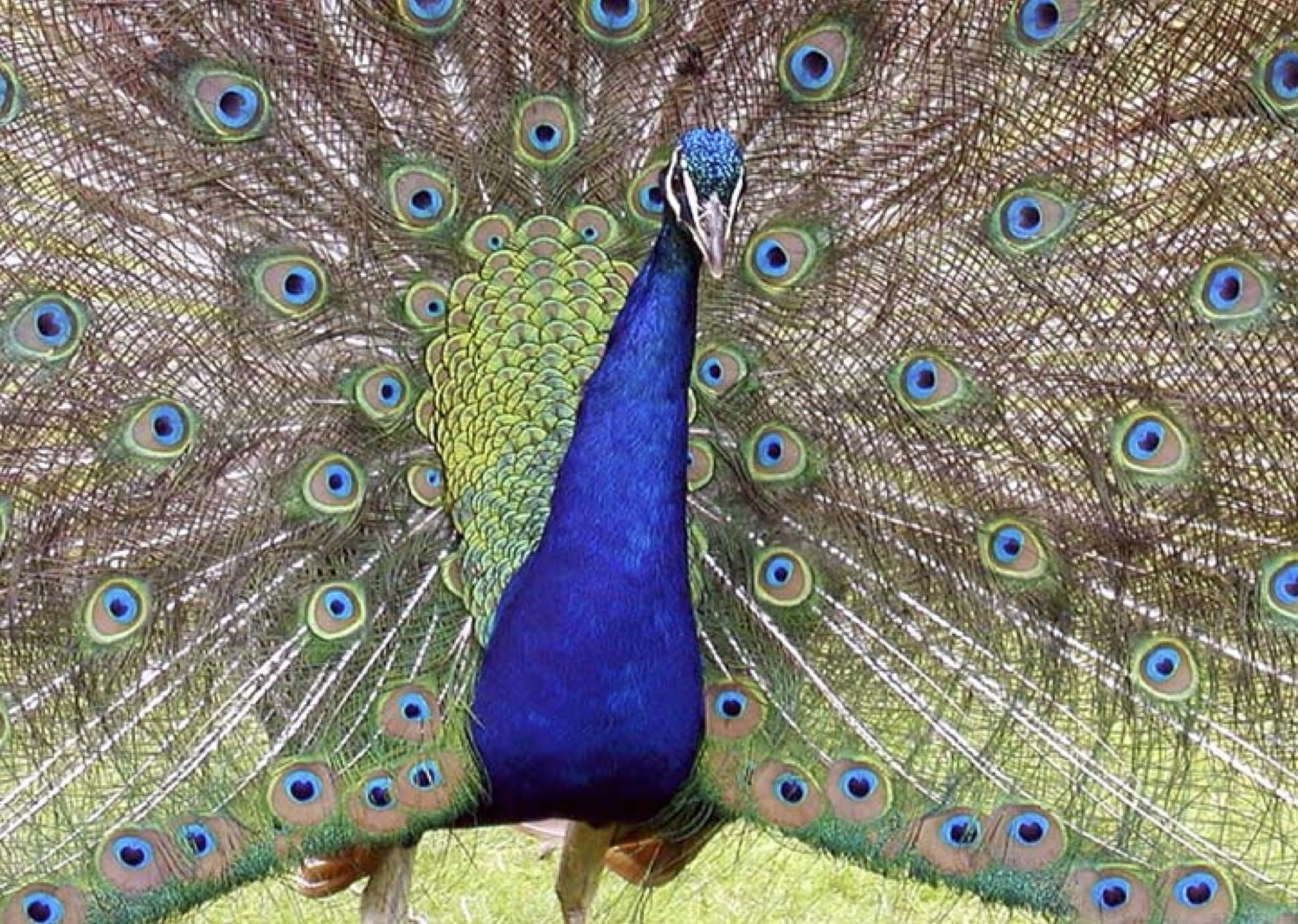 A peacock spends about six months building this spectacular fan of five-foot feathers. Even the tiny white part of each shaft that encroaches on the design is colored brown so as to not spoil the aesthetic effect. Carrying this bulky burden aloft is, surprisingly, no problem at all for peacocks. Image: Arpingstone through Wikipedia

To determine how much drag the big peacock train creates, Dr. Askew tested a train—without the bird—in a wind tunnel. When actual birds were tested, the magnitude of the train’s drag was thus known.

Dr. Askew filmed peacocks taking off with high-speed video cameras. From the films he was able to locate each bird’s center of gravity, analyze its wing movements, and study how the train moved. He calculated the power each bird generated as it accelerated and ascended during its first two wing beats.

Then he imitated the molting process by whacking off the long plumage and repeated the process. The results were a real shock. The impact of this drag on the power needed to take off was, surprisingly, negligible! Even though a train increases the drag, it makes no significant difference in the power the peacock needs to take off!

One would be hard pressed to explain how so many precise variations on an ordinary feather’s genetic instructions could accumulate, each adding a survival or reproductive advantage, until the artistic pattern of the peacock feather is achieved.

“Intuitively,” Askew says, “you expect that the train would detrimentally affect flight performance and so not finding a detectable effect was a bit surprising. These birds do not seem to be making quite the sacrifices to look attractive we thought they were.”

Of course the train does have some cost. Besides requiring 3% of the bird’s energy output to produce, it may alter the peacock’s stability in flight or make it difficult to run. These costs have not really been assessed. But the bird’s most effective way to escape danger—by rising above it—seems totally unaffected by the presence of that gorgeous plumage.

From Askew’s evolutionary point of view, it now appears the trade-off between danger and the reproductive advantage presumably accrued through attraction to peahens may not be so difficult to achieve. Askew says, “The train of the peacock is one of the most iconic examples of sexual selection in the animal kingdom. It has been thought that such elaborate ornamentation carries a functional cost for the bearer. These results therefore have broader ramifications for evolutionary biology's understanding of sexual selection.” He writes, “Demonstrating whether sexually selected traits do incur a cost is necessary to test current theories in evolutionary biology.”3

Last year researchers showed that peahens are not as interested in the roughly 300 iridescent eyespots wafting and rattling above the heads of potential mates as commonly thought. (Read “Evolution Through the Eye of the Beholder” to find out where peahens are really looking during courtship rituals. You might be surprised!!) It may be that all those feathers merely offer a signal that breeding season is open or perhaps make the approach of potential mates through dense undergrowth easier for the peahens to spot. If that is the case, then the selective value of such an elaborate design becomes hard to explain (much less to justify from an evolutionary point of view).

But even if pretty plumage makes a peacock more attractive to peahens—a debatable point—can sexual selection really explain how the peacock got all those feathers? And frankly, considering the remarkable complexity of the peacock’s feathers—far exceeding even the complexity of ordinary feathers—one would be hard pressed to explain how so many precise variations on an ordinary feather’s genetic instructions could accumulate, each adding a survival or reproductive advantage, until the artistic pattern of the peacock feather is achieved. Just read Dr. Stuart Burgess’s description of these features in “The Beauty of the Peacock Tail and the Problems with the Theory of Sexual Selection” to get an idea of all the design features that must exist simultaneously to produce the peacock patterns! Now add to that the additional genetic changes features that would be needed to make the train-bearing bird aerodynamically competent.

Nothing in the study of genetics has demonstrated that mutations add the sort of information to allow a new kind of animal to develop from a simpler one. The irreducible complexity—the necessity of having all the features in place before any of them work properly—makes the idea that the random events of evolution conspired to produce the peacock’s feathers unacceptable even if mutations were known to be able to design a new kind of animal. Coupled with the fact that so many of the traits associated with peacock feathers are aesthetic rather than functional and the fact that research does not unequivocally support the idea that peahens go out of their little pea-brained minds over the sight of an exquisitely formed set of feathers, and “peacock feather evolution” becomes an oxymoronic phrase, as indeed “feather evolution” is.

God created all kinds of animals, plants, and the first two human beings in the space of just six days, about 6,000 years ago. They have for about 6,000 years varied and reproduced only within their created kinds, as we infer from Genesis chapter one He designed them to do. Protolife-to-peacock evolution cannot explain the beauty of the peacock’s feathers or its aerodynamic qualities, but what we read in the history book of all life—God’s Word—explains what we see in God’s world.

Of course we still don’t know why God designed such an over-the-top artistic wonder as the peacock. Perhaps He simply wanted His people to know that He is not only a great engineer but also to demonstrate that the Creator Himself appreciates beauty and wants us to do the same, admiring the handiwork of our God.