Evolution Through the Eye of the Beholder

Can a birds’ eye view explain the evolution of animal ornamentation and courtship behavior?

Do you ever wonder what is in the pea-brain of a peahen when a fancy peacock shows off? That question remains a mystery, but eye-tracking technology has revealed what part of a peacock gets a lady-bird’s attention.

Previously, researchers have suggested that the number of eyespots, the length of the “fishtail” feathers, or the quality of the elaborate courtship display was the key to a peacock’s opportunity to pass on his genes.1 However, “this is the first study to ask the females what they’re really attending to,” says Jessica Yorzinski, lead author of “Through their eyes: selective attention in peahens during courtship” published in The Journal of Experimental Biology.

“We tested whether peahens selectively direct their attention toward particular male traits (such as eyespot and fishtail feathers), and if so, whether the behavior of the male or female influences this attention. Furthermore,” Yorzinski writes, “we examined the distance at which male display components influence female attention.”2

Wearing a patch over first one eye and then the other, each of 16 peahens was equipped with a wireless headset and two cameras. One camera revealed the bird’s field of view. The other tracked her eye movements. Thus it was possible to tell just what each peahen was looking at.

Playing Hard to Get

The peahens looked at the courting peacocks only 21-27% of the time.3 Confirming Darwin’s observation that peafowl “females often appear to human observers as coy and uninterested,”4 each peahen’s attention instead flicked between her environment and the peacock. This was not surprising, according to Yorzinski. “It is likely beneficial for them to divide their attention among potential mates and the environment,” she says. “If females are not alert and focus completely on a displaying male, they may end up as a tiger's dinner.”5

Given the effort required to hold a peahen’s attention, the advantage of bright bulky ornamental plumage may offset its disadvantages. “There are quite a few species that have theses elaborate colourful traits that don’t serve any survival function,” Yorzinski says, and a peacock’s large ornamental train “might actually make it very difficult to get away from a predator.”6 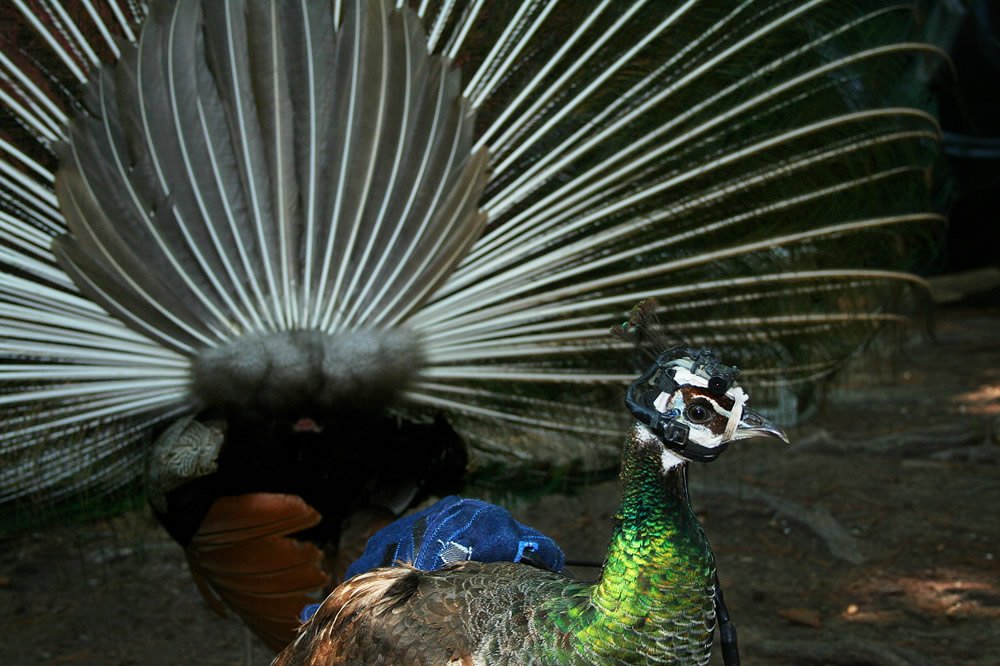 This peahen is equipped with a wireless headset and two cameras to track her eye movements when a peacock tries to get her attention. Image by Jessica L. Yorzinski, via National Geographic.7 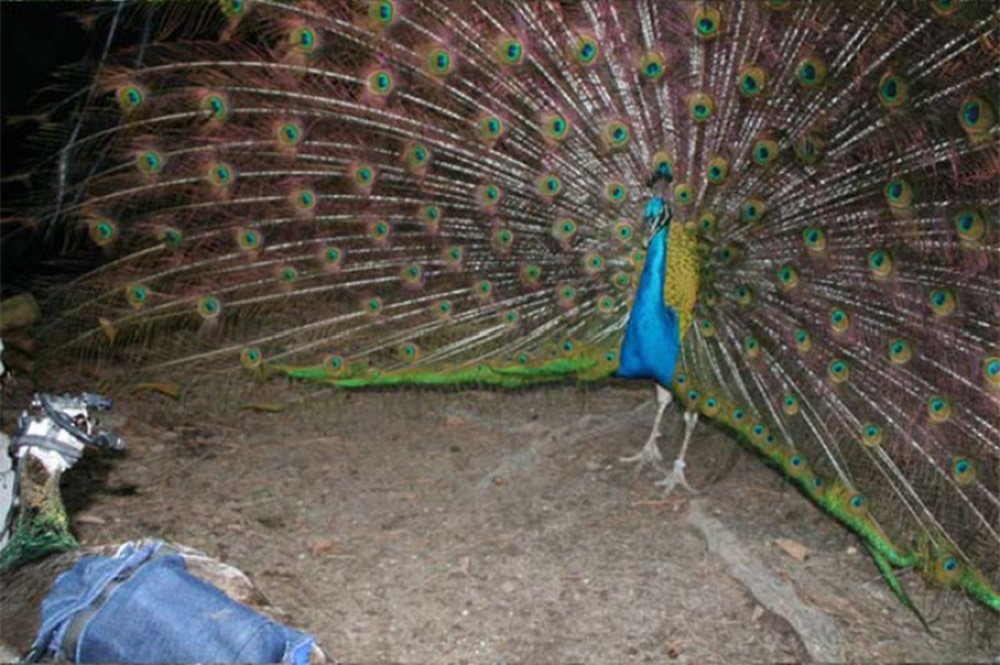 When the peahen finally glances at the peacock rattling his feathers, she only notices the lower portion of his tail, ignoring the parts of the display most impressive to us. Image by J. Yorzinsky et al., via The Journal of Experimental Biology.8

Once a peacock succeeds in attracting a peahen’s attention—by noisily rattling his tail feathers and shaking his wings up and down—the researchers learned that neither his ornamental head crest nor his tall fishtail feathers nor even the fanned array of eyespots is of any consequence. “Surprisingly,” they write, “we found that peahens selectively attend to only a fraction of this display, mainly gazing at the lower portions of the male train and only rarely at the upper portions, head or crest.”9

Only when the lower train was obscured did the females notice the iridescent eyespots and fishtails of the upper train. The authors suspect that in the wild, where vegetation is dense, peahens may identify approaching peacocks by the upper train, which becomes inconsequential when the whole bird is in view.10

Peafowl courtship hinges on multiple factors. Peahens are interested in the peacock’s upper tail if nothing else is visible. Within 1 to 3 meters, peahen attention is attracted by tail rattling in peacocks facing them and wing shaking when viewed from behind.11 But “from the head down was where most of their gaze was directed,” says Yorzinski. “The peahens often looked from side-to-side across the bottom portion of the train, suggesting that they were gauging the width of the train.”12 The peacock’s train grows until he is about five years old, so it may reveal a male’s maturity to an observant female. However, no one knows what it was about the lower train the peahens were actually noticing. From a bird’s eye view, both the interesting qualities and why they should be interesting are still a complete mystery.13

The researchers conclude that “interaction” between this constellation of physical traits and behaviors promoted their evolution. “The evolution of complex, multicomponent sexual traits has been controversial,” they write, “but recent evidence suggests that they may evolve to capitalize on female sensory and cognitive processes.”14 However, interaction of instinctive courtship behaviors and male ornamental plumage with peahen cognition does not explain how they came to exist in the first place. “Interactions between display components”15 do not provide a genetic basis for their origin, much less their coexistence. The authors simply assume that these traits coevolved and speculate about the purposeful force that drove them to do so.

Dr. Stuart Burgess, a professor of engineering design with expertise in biomechanics, writes:

According to the theory of sexual selection, the peacock tail has gradually evolved because the peahen selects beautiful males for mating. However, there is no satisfactory explanation of how the sexual selection cycle can start or why the peahen should prefer beautiful features. In addition, there is irreducible complexity in both the physical structure of the feather and in the beautiful patterns.16

Burgess discusses the elaborate anatomical details that produce the beauty we appreciate in the peacocks’ feathered features—qualities to which the peahen is evidently oblivious. These beautiful features don’t just appear by magic but demand an intelligent designer. Dr. Burgess explains:

Every detail in the peacock tail must be defined by genes in the genetic code of the peafowl. Since the tail feathers have very complicated structures and colour-producing mechanisms, there must be a large amount of design information in the genetic code.

It is difficult to determine how many genes would be required to specify the aesthetic features of a peacock tail feather because it is not known how the tail feather grows. However, a conservative estimate can be made by assuming that each separate aesthetic feature is specified by one gene. By assuming that each colour and each shape within the eye pattern represents a separate feature, and taking into account the other features discussed in this paper, the total number of aesthetic features in a single feather comes to about 20. Therefore an estimated 20 genes are required for the peacock tail. This may be a very conservative estimate.

. . . According to evolutionists, all of this information has appeared gradually by genetic mistakes and by sexual selection.

The theory of sexual selection was first proposed by Charles Darwin in The Descent of Man. Even though this theory has always been controversial, most evolutionists now believe that it can explain how beautiful features could evolve from nothing.17

The theory of sexual selection does nothing to explain the origin of these complex behaviors and ornamentation, much less how conspicuous and cumbersome plumage could evolve in a predator-filled world. Nevertheless, Yorzinski and colleagues write that their findings “highlight the potential of eye-tracking technology to understand the evolution of animal signals by looking at these signals through the eyes of the animals.”18

Darwin, even without a 21st century appreciation of DNA’s complexities, said, “The sight of a feather in a peacock’s tail, whenever I gaze at it, makes me feel sick!”19 This wonderfully designed ornamentation defied evolutionary logic in Darwin’s time and still does today. Yorzinski’s observations do not support evolutionary dogma as they offer no naturalistic explanation for the origin of anything. Biblical history tells us that God created each kind of animal to reproduce after its kind. There is no need to invoke an evolutionary process to explain the courtship of peafowl.

Previous Article Monogamy: Is It Rooted in an Evolutionary Past? Next Paper Were Birdbrains on the Dinosaur Pre-flight Checklist for Evolution?