The brief exposure of 49 Early Pleistocene human footprints on the fossil-rich shore of Happisburgh in Norfolk, England, clearly places humans in northern Europe during the Ice Age.

“These footprints are immensely rare—and are the first examples of such great age to have been found outside Africa,” says archaeologist Nicholas Ashton. They are of huge international significance because they give us a very tangible link to the first humans to inhabit northern Europe, including Britain.” Ashton says the prints and other fossils from the area will “rewrite our understanding of the early human occupation of Britain and indeed of Europe.”

Last May severe erosion of beach sand at low tide revealed foot-sized elongated hollows imprinted in exposed tidal mudflats. The impressions, aligned as if walking, resembled other known fossilized human footprints. Time and tide wait for no man, so scientists from the British Museum, London’s Natural History Museum, and Queen Mary University of London scrambled to get the seawater and sand mopped out of the prints for a better look before they disappeared two weeks hence.

The team photographed the prints from every conceivable angle and used computerized photogrammetrics to reconstruct them as three-dimensional images. The 49 human footprints were made by at least five individuals of various sizes.

“The humans of mixed ages were moving in a southerly direction across the mudflats of a tidally influenced river within the upper reaches of its estuary. The mudflats were rapidly buried by tidal processes with further silts,”2 the archaeologists write. The fossilized prints ultimately were submerged beneath rising water as sea level rose at the end of the Ice Age. 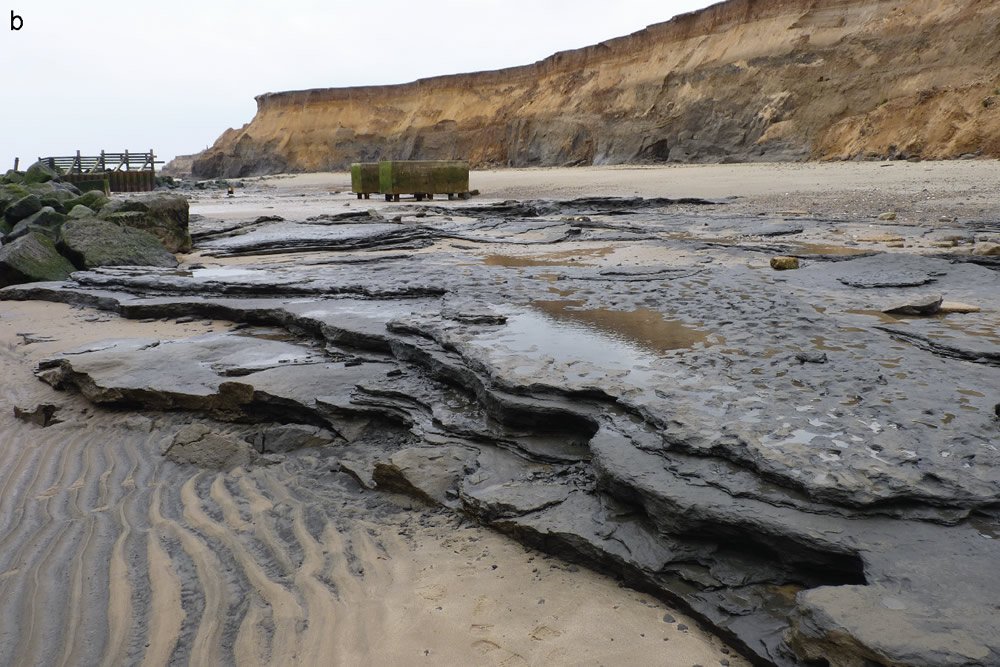 Forty-nine human footprints made by at least five people and preserved in Lower Pleistocene sediment were uncovered for just two weeks at this Happisburgh beach in Norfolk, UK. This photo showing the prints looks southward, the direction the people were walking. Image by Simon Parfitt, via PLoS ONE.3

Though erosion has erased much anatomical detail, a dozen feet were completely outlined. Twenty-nine showed the arch. And in one the toes were clear.4 Analysis confirms the prints are like those of modern humans.

The feet that made these prints were attached to people about the same height as humans today. The man-size feet were about 25–26 cm (10 inches) long, which means in today’s America he’d have worn a size 8 shoe. Other prints 18-21 cm (7–8 inches) long were consistent with feet from modern women or teens. Those 14–16 cm (about 6 inches) would correspond to modern children. These foot sizes suggest the people were 0.9 to 1.7 meters (about 3 to 5 ½ feet) tall. 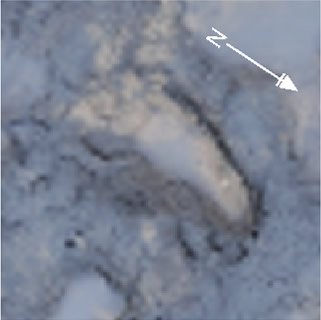 This ancient human footprint with toe-prints and the arch preserved appeared briefly at Happisburgh. It was made by a person walking along an ancient river and preserved in Lower Pleistocene sediment. Image from PLoS ONE.5

Beneath the layer of sediment that normally covers Happisburgh’s shoreline scientists suspect there was once a river estuary. The people were walking upstream. While no one can know what they were doing, archaeologist say their meandering course suggests a food-gathering stroll. The flora and fauna fossilized nearby indicates an environment with an abundance of edible resources, from shellfish to seaweed.

The World Where They Walked

Numerous fossilized animal bones and tools have been found on the Happisburgh shore at the same stratigraphic level and within 150 meters of the prints. These include about 80 stone knives and scrapers fashioned from flint. Local animals included mammoth, hyena, rhinoceros, hippopotamus, elk, deer, seals, and sturgeon.

“As well as the footprints, we have also found the remains of substantial numbers of animals, including 15 types of mammal and 160 different species of insect—as well as more than 100 types of plant,” says Simon Parfitt, whose area of expertise is Ice Age mammals. “This is allowing us to reconstruct, in considerable detail, the environment in which these early humans lived.”

Who’s Who in Ancient England?

Without corresponding skeletal remains—a happy problem for the prints’ original owners, no doubt—anthropologists cannot be dogmatic about the identity of the Happisburgh party. What they are sure of, even though the footprints look just like those of modern humans, is that they didn’t belong to modern humans. Humans yes, but surely some sort of Homo ancestor, for evolutionists maintain that the footprints were made before anatomically modern humans evolved.

The leading candidate, based on the dates assigned to the strata in which the prints were found, is Homo antecessor, a Homo species found in Spain’s Atapuerca Mountains. Homo antecessor fossils were found in the mid-1990s in Gran Dolina cave. Their original date of 800,000 years has recently been revised after a paleomagnetic study6 and is now listed as 900,000. A matching partial jawbone and lots of stone tools were found at Sima del Elefante in 2005 and dated to 1.2 million years.

Homo antecessor combines subtle “primitive” and modern features. The teeth resemble Homo erectus, but the shape of the jawbone and nasal region match modern humans. Evolutionary anthropologists generally consider Homo antecessor a descendant of Homo erectus and the ancestor of Homo heidelbergensis. Homo heidelbergensis is considered the common ancestor of Neanderthals and modern humans. Homo heidelbergensis fossils, which have less prominent features than Neanderthals, have been found in England, Germany, Greece, and China and—depending on whose assessment you accept—in Spain’s La Sima de los Huesos cave.

What they are sure of, even though the footprints look just like those of modern humans, is that they didn’t belong to modern humans.

Recent genetic analysis has shown that the Sima de los Huesos people, who resemble Neanderthals, are more genetically similar to Denisovans, for whom current fossil evidence is too scanty to make any reasonable predictions about their body features. When we realize that all these fossils actually are the remains of people descended from those who spread out from the Tower of Babel, it is easy to understand that all these Homo whoevers are just varieties of fully human individuals coping with life in the post-Flood world.

When Did They Walk?

When did the Happisburgh people take their now-historic stroll along the river? From biblical history and the Ice Age-related (“Pleistocene”) characteristics of the sediment in which their prints were found, we know it had to be in the years after the global Flood, and so only around 4,000 years ago.

So why do evolutionary scientists think these people were primitive humans from nearly a million years ago? Creationist geologist Dr. Andrew Snelling explains:

For such very recent deposits dating from the conventional Pleistocene (the post-Flood Ice Age period in the biblical chronology about 4,000 or so years ago) it is notoriously difficult to determine an absolute age. All the techniques used, such as ESR (electron spin resonance), TL (thermoluminesence) and US (uranium series) rely on dubious unprovable assumptions about how present observable processes can be extrapolated back into the unobserved past and not be affected by past different environmental conditions, and past geological and other process factors that could otherwise change the attributes being measured only today in these techniques.

These clearly human fossil footprints found at Happisburgh, UK, have been correlated with human fossil bones found at Atapuerca in Spain, a correlation that can only be made by such dubious absolute dating methods. At Atapuerca paleomagnetic dating has also been applied to the strata overlying the layer containing the human fossil bones. The date obtained corresponds to a polarity change in the paleomagnetic timescale which fortuitously provides an absolute date that overlaps with the wide-ranging dates obtained by the US-ESR and TL techniques. However, the paleomagnetic timescale has to be calibrated against the other absolute dating techniques plus radioactive dating methods such as potassium-argon (K-Ar) and its variant argon-argon (Ar-Ar), both of which have been documented to give errant old ages for materials of known age, which undermines their absolute status. So none of these dating methods can be truly relied on.

The Happisburgh prints belonged to people of the same height and fossil strata as Homo antecessor, so that’s what they will be called. Leaving modern-appearing human footprints preserved in the fossil record is of course no guarantee that evolutionists will consider you human.

The most modern appearing print in the wrong part of the fossil record thus can be assigned to a primitive. At least the Happisburghs left their mark where humans are allowed to be on the evolutionary timeline.

Evolutionists are not the only people who have difficulty accepting the fact that fully human people walked the earth at the wrong “time.” Progressive creationists like Hugh Ross try to reconcile an “old earth” millions-of-years position with the Bible. The discovery of obviously human footprints too “early” in the fossil record is a problem for Ross’s biblically compromised position. A progressive creationist would have to consider these prints the product of some sort of soulless animal that looked like a human but was not made in the image of God or the prints of actual humans who died out before Adam appeared on the scene. Neither option is biblical. Scripture teaches that God created man out of the dust of the ground, not out of an ape-like ancestor. Scripture also teaches that all people are descendants of Adam and Eve, the first two human beings who were made on the sixth literal day of history (Acts 17:26; Romans 5:12; Genesis 3:20).

Where did these people originate? Dr. Snelling sums them up their historical origin:

So the significance of these human footprints is clear. Just as their human counterparts in Spain, these people were descended from Noah’s family and had migrated from Babel after the Flood to Europe, about 4000 or so years ago. One day this group of people was walking along these river estuary sediment flats and left their footprints in the wet silty sediments. People still do that today. The next tide had to carry in sediments to immediately cover and preserve these footprints, or otherwise the footprints would have been washed away, the same as what is observed to happen today.

Historically the “Happisburghs” then are very likely representatives of some of the first humans to arrive in post-Flood Britain.

Previous Article How Cavefish Went Blind, and Why It Matters Next Article Lizard Breath Fails to Support Kinship with Birds