Why Do Arms and Legs Come in Pairs?

You only have two arms and two legs because your gut got in the way, evolutionists say.

Why does every jawed vertebrate have one pair of upper and one pair of lower appendages? Theoretical biologists at the University of Vienna and Austria’s Konrad Lorenz Institute for Evolution and Cognition Research have come up with a model explaining why. They contend that jawed vertebrates evolved just two pairs of appendages with their characteristic placement because the co-evolving gut—with separate compartments for different stages of digestion—got in the way.

Guppies, birds, dogs, elephants, and people are all “gnathostomes.” Gnathostome vertebrates have jaws and backbones. All gnathostomes have two sets of paired appendages.

Whether pectoral and pelvic fins, front and hind legs, wings and legs, or arms and legs—placement is similar across the board: one pair is always nearer the mouth and the other pair near the other end of the digestive tract. Why don’t we have an extra pair of arms at our waist to carry packages? Why don’t fish have a whole series of paired fins like banks of oars on a galley? Couldn’t they swim faster that way?

Regulatory genes switch other genes on to trigger budding appendages at the right spots. Embryos can be experimentally manipulated to start growing more. Having this potential, why has no gnathostome ever evolved extra sets of limbs?

“Despite this potential to form additional limbs in the flank, no gnathostome species with an additional set of paired limbs has ever emerged,”1 writes Laura Nuño de la Rosa, lead author of the study published in Evolution and Development.

Embryology will answer this evolutionary dilemma, the researchers thought. “We have drawn together a large body of molecular embryology work, as well as results from paleontology and classical morphology to work out an overall explanation of how the vertebrate embryo forms pairs of appendages along each side, and only two pairs situated at front and back ends of the body cavity,” says Nuño de la Rosa.

This diagram from the journal Evolution and Development shows the typical location of paired fins in jawed fish. The paired limbs of terrestrial vertebrates are in corresponding locations, more or less near the beginning and end of the digestive tract.

This cross-sectional diagram of one side of a developing embryo shows the separation of the two mesodermal layers, called the “Lateral Mesodermal Divide.” Austrian biologists propose that the visceral mesoderm inhibits the somatic mesoderm from forming limbs or fins unless the layers are partially separated. If this is indeed the mechanism by which the regulatory genes switching on limb or fin formation are triggered, then the separation of the mesodermal layers would be considered an epigenetic signal that enables embryonic development to proceed properly. (The somite, pictured, is a segmental block of embryonic tissue from which other tissues like muscle and bone differentiate. The unlabeled structures are the neural tube which becomes the spinal cord and, below it, the notochord, which acts as a cartilaginous template for developing vertebrae.) 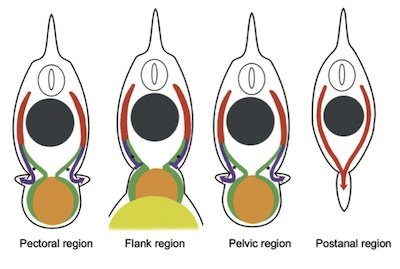 These diagrams depicting jawed fish embryonic development at several levels shows the model that Austrian biologists have proposed to explain how the interaction of embryonic tissue layers might signal the expression of fin-developing genes at just the right locations. Stars mark the boundary between somatic (purple) and visceral (green) mesoderm. An Austrian team of biologists proposes that visceral mesoderm inhibits somatic mesoderm from forming limbs unless separated somewhat. Thus budding pectoral and pelvic fins are shown in the sections where the visceral and somatic mesoderm are separate anterior and posterior to the developing gut. Midline fins, they think, form when somatic mesoderm layers fuse in a region that is completely uninhibited by visceral mesoderm, as shown in the last section. All images: Laura Nuño de la Rosa et al., via Evolution and Development.2

Which embryos should they compare? The signature similarity shared by all gnathostomes is this pairing and placement of appendages.

Jawless fish (like lampreys) lack paired fins. The lamprey’s body is a tube with openings for the digestive tract on both ends and some median, unpaired fins. “Lamprey embryos, primitively lacking paired fins, serve as living exemplars of this ancestral stage,”3 evolutionists believe.

Vertebrate embryonic cells differentiate to form three layers—ectoderm, mesoderm, and endoderm. As these tissues fold and twist and grow and differentiate further, the anatomical parts of an animal or a person develop.

The outermost layer, ectoderm, differentiates into skin and the nervous system. The inner layer, endoderm, rolls itself into a tube and twists and pinches itself to become the various parts of the gut, from mouth to anus. Mesoderm, the middle layer, splits into two layers that line the underside of the ectoderm (somatic mesoderm) and the outside of the developing gut tube (visceral mesoderm). Visceral mesoderm contributes to developing internal organs. Somatic mesoderm develops into the muscles and bones of the body wall and the appendages.

So what, the Austrian team wondered, could trigger somatic mesoderm to form paired limbs or fins in only two places?

The lamprey’s tubular gut is not divided into sections like our stomach and intestines. And the lamprey has no paired fins. All gnathostomes, on the other hand, have a compartmentalized digestive tract and paired appendages. Therefore, the researchers proposed that an ancient fish evolved paired fins in response to the interaction of embryonic tissue layers being pushed around by the co-evolving compartments of the gut.

Gnathostome embryos form their paired appendages near each end of the gut. At these locations somatic and visceral mesoderm are separate and in contact with the ectoderm rather than in contact with the developing digestive tract. The Austrian team therefore believes visceral mesoderm inhibits fin formation wherever it still touches somatic mesoderm, as is the case in the flank region. Separation of these layers at the ends of the developing gut, however, releases that inhibition and allows the somatic mesoderm to form pectoral and pelvic fins.

Extrapolating from embryology to evolution and believing legs evolved from paired fins, Nuño de la Rosa says, “You could say that the reason we have four limbs is because we have a belly.”

The team’s work has been essentially theoretical. “It will be interesting to investigate the possibility that the somatic‐visceral junction may act as a signaling center to repress appendage initiation.”4 They hope that understanding how embryonic tissues differentiate into paired appendages will help evolutionists understand how organisms once evolved brand new structures.

Evolutionary scenarios explaining how new structures evolved are reminiscent of Rudyard Kipling’s Just So Stories—and just as fanciful. Since embryologic development is a series of changes that produce increasing structural and functional complexity—and since embryonic development produces end-products that actually work—they are the natural place for evolutionists to seek support for their particular “Just So Stories.” However, understanding how something works in a developing embryo does not demonstrate that a similar process occurred through random natural processes once upon a deep time to create complexity and lve the marvelous designs we see throughout nature. Why? Because the embryo already possesses the genetic information to guide its development.

The embryo already possesses the genetic information to guide its development.

The embryo’s genome may direct the proper placement of fins or limbs through epigenetic signals triggered by interacting tissues. Such a mechanism is consistent with our understanding of embryonic development. But there is no reason to assume those embryonic tissues randomly developed in the first place and then happened to interact this way, producing the magical combination that evolved into us. No amount of testing can demonstrate some ancestral lamprey-like fish developed the innovation of paired fins by accident. Embryonic development in the present is no proof of evolutionary development in the past.

While evolutionists depend upon magical undirected processes with no biologically observable support to explain how we got here, we depend upon the eyewitness account of our Creator. We understand that common designs—like the common appearance of paired fins, paired limbs, and paired wings—are exactly what we would expect from a Common Designer. It is no surprise that God used similar principles of embryonic development to produce many common designs, each individualized to suit the needs of each kind of creature.

God tells us in His Word that He created all kinds of fish, birds, land animals, and the first two people in the space of just two days (Genesis 1–2; Exodus 20:11). No evolution was involved, and by summing up the genealogical information in the Bible we know that God did this about 6,000 years ago. He said in the Bible that He created all living things to reproduce after their kinds, and that is exactly what we see in biology: living things reproduce and vary within their created kinds. The science we see—as opposed to the science evolutionists only imagine—actually fits what we read about in God’s Word.

As Answers in Genesis writer Steven Golden recently wrote in the aftermath of the Nye-Ham debate, “People need to see that only the Bible makes sense of the universe we live in and provides the ultimate proof of our origins. Furthermore, the goal of any debate should be to spark a desire to think critically about an issue and to research it further.” We encourage all our readers to use the articles listed below and elsewhere on this web site to do just that.

Previous Article Geneticists Duel Over Dates for “Y-Chromosomal Adam” Next Article How Cavefish Went Blind, and Why It Matters