In the Arnhem Land plateau area of in Australia’s Northern Territory, in a place so remote it is best reached by helicopter, is Narwala Gabarnmang, the “Sistine Chapel of rock art sites.” Discovered during a 2006 survey sponsored by the Jawoyn Association Aboriginal Corporation, Narwala Gabarnmang is a huge open rock shelter. The cave’s ceiling is adorned with hundreds of rock paintings.

“Rock art is notoriously difficult to date and although we know that people had occupied this site at least 45,000 years ago we did not know how old the art was,” says University of South Queensland’s Bryce Barker. Rock paintings are difficult to date because they are often painted with minerals and contain no organic material for carbon dating. Therefore, Barker’s discovery of a charcoal rock drawing last year was particularly exciting. 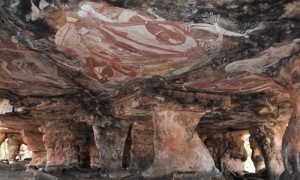 Carbon-14 analysis dates this piece of Narwala Gabarnmang art to 28,000 years. That beats the previous Australian rock art record held by the Bradshaw paintings in Kimberley. “The Bradshaws are often talked about as being the oldest rock art in Australia, but the oldest firm date for them is 16,000–17,000 years taken from a wasp nest covering the art,” Barker explains.1 “Some rock art has previously been dated older than 28,000 but there are problems with [those examples].”2 However, Barker adds, unlike the Bradshaws, the art he found at Narwala Gabarnmang has been “unequivocally dated,”3 assigning it an age in the same ballpark as the bears painted in France’s Chauvet cave (though those dates are also disputed4). 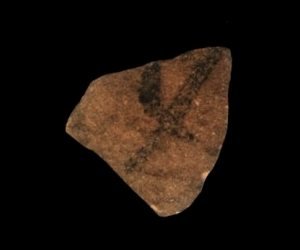 Charcoal drawing on a rock excavated at the rock shelter of Narwala Gabarnmang, dug from “a layer deep down in the earliest levels of occupation.” Image from Heritage Daily.

“It puts Aboriginal people up there as among the most advanced people in human evolution,” Barker explains. “Some of the earliest achievements by modern humans were happening in this country.”5

Evidence supporting a high level of cultural achievement early in Australian Aboriginal history supports other findings from Narwala Gabarnmang. Jawoyn Homeland Project archaeologists have also found a stone axe with a ground edge. “Carbon dating around the entire piece returned a date of 35,500 years, making it the oldest of its type in the world,”6 according to the Jawoyn Association’s website. Barker points out that such “stone tool technology” elsewhere in the world is associated with much later dates. Furthermore, carbon dating of charcoal from the cave where Barker found the charcoal rock drawing has revealed “Aboriginal people were visiting the site more than 45,000 years ago.”7

Such dating methods are based on assumptions that cannot be proven. In the case of carbon-14 dating, one such assumption is that the plants buried in strata deep in the geologic record had the same ratio of carbon-14 to carbon-12 as those today. However, there is no way to know if the production and atmospheric concentration of carbon-14 were the same when those plants were buried. In fact, one factor that distinguished the world in which those plants were buried from the world today is the mass of the biosphere. Based on the vast quantity of fossil fuels buried in the earth, the world prior to the global Flood may be safely envisioned as having a far larger biosphere (many more plants and animals) than that of the post-Flood world. Massive destruction by the Flood would have radically altered that. Therefore, because scientists normally do not account for the much larger biosphere in the pre-Flood world and assume the proportion of carbon-14 to carbon-12 has always been the same, they calculate dates much higher than the dates calculated on the basis of the Bible’s chronology. (Be sure to read more about the strengths, weaknesses, and corrections of carbon-14 dates at A Creationist Puzzle.)

The shadow of an additional bit of fallacious reasoning haunts Barker’s “unequivocally dated” art. The charcoal was carbon-dated at 28,000 years, but the charcoal and the drawing are not necessarily the same age. The wood used to make the charcoal could have been substantially older than the artwork.

Thus, while we would discount the extreme absolute ages for the cave art, ground-edge stone axe, and charcoal, we certainly do not dispute the claim that Australian Aborigines were capable of advanced abstract thinking, genuine artwork, and technology comparable to or exceeding that of indigenous ancient people the world over.

All people, including Australian Aborigines, are descended from Noah’s family.

All people, including Australian Aborigines, are descended from Noah’s family. After God confused the languages of people at the Tower of Babel, in the years following the global Flood of about 2350 BC, groups of people dispersed through the world. Each group surely possessed knowledge of some current technology in addition to their new language. Thus, we expect to see evidence of intelligent people scattered all over the world, including these paintings in Narwala Gabarnmang and cave paintings in Spain (like the record-breaking cave art described last week in Handprints in Northern Spain). Aborigines were not at the head of the human evolutionary pack but were, like groups of people all over the world, using their intelligence and their skills to rebuild civilizations after the Flood and migration from Babel.

Australia’s Aborigines, furthermore, have been historic victims of racially driven devastation. Such abuse began with European colonization. Later, in the 19th century, on the basis of Darwinian philosophy, Aborigines were hunted for their scientific value. Colonial policies eventually gave way to more protective paternalistic policies but continued for many years to treat the Australian Aborigines disrespectfully. Thankfully, those policies have now ended. Yet how much Aboriginal suffering would have been averted through the years, both pre- and post-Darwin, if those who interacted with the original indigenous people of Australia had acknowledged the wisdom spoken by the apostle Paul in Acts 17:24–31. God our Creator “has made from one blood every nation of men to dwell on all the face of the earth, and has determined their preappointed times and the boundaries of their dwellings, so that they should seek the Lord, in the hope that they might grope for Him and find Him, though He is not far from each one of us.” Had they viewed Aborigines with biblical wisdom, they would have known they owed them the love of Christ and the knowledge of His gospel.