Can Karabo Catch Up with Lucy's Legacy?

Can Karabo catch up with Lucy’s legacy?

Entombed for many years—about two million according to Lee Berger but no more than a few thousand based on biblical history provided by the Creator of the universe—a fossil has remained encased in solid rock and unnoticed in Berger’s South African laboratory for three years. Finally someone noticed a telltale tooth. Now, the rest of Karabo (or maybe his cousin) can be seen using CT scans taken through rock. But soon, unprecedented worldwide online interactive coverage of his “dis-entombment” should forever secure Australopithecus sediba’s spot in the public mind.

Karabo, meaning “the answer,” is the name Berger has given to his signature fossil, Australopithecus sediba. Berger claims his australopithecine ape, which made its public debut in 2011, is the oldest human ancestor yet found. He believes Au. sediba is “the answer” to the search for “the missing link.” (See “Sediba with a Little Sleight of Hand” for a discussion of the various features Berger claims are human-like.) 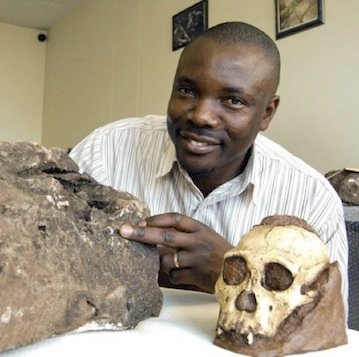 Student Justin Mukanku points to the tooth he found in a fossil-filled rock. Beside him is the skull of the australopithecine ape discovered by Lee Berger at Malapa Cave in 2008. Compare a more profiled view of a cast of this skull to a human skull in News to Note, December 31, 2011: Year in Review. This image from Wits Institute for Human Evolution, University of the Witwatersrand from news.nationalgeographic.com/news/2012/07/120712-human-ancestor-fossils-sediba-science-berger-live 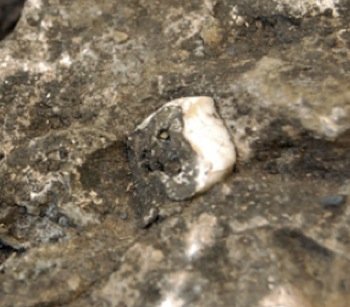 Close-up of the telltale tooth that alerted Berger’s team to the presence of the bones inside the rock.1

“What we found inside of this enormous rock is what appears to be the remainder of either the skeleton of Karabo or another skeleton entirely,” says Berger. “We have discovered parts of a jaw and critical aspects of the body including what appear to be a complete femur (thigh bone), ribs, vertebrae and other important limb elements, some never before seen in such completeness in the human fossil record. This discovery will almost certainly make Karabo the most complete early human ancestor skeleton ever discovered. We are obviously quite excited as it appears that we now have some of the most critical and complete remains of the skeleton, albeit encased in solid rock. It's a big day for us as a team and for our field as a whole.”2

By comparison, “Lucy”—aka Australopithecine afarensis—established a reputation in the evolutionary hall of fame for supposedly experimenting with bipedality 3.2 million years ago (see “A Look at Lucy’s Legacy”). Berger believes Au. sediba had evolved to acquire several additional human-like traits mixed with ape characteristics by about a million years later. This timing would just precede the earliest accepted date for Homo erectus fossils. (Again, see “Sediba with a Little Sleight of Hand” to see how these desirable dates were obtained.) Some controversy has surrounded those dates and the place of Au. sediba on the human evolutionary tree. Media coverage, however, dubbing it the “new human species from South Africa,”3 Berger’s liberal dispersion of Karabo casts to museums worldwide, a catchy name, and of course Karabo’s memorable portrait beaming with charisma (see “Forensic fantasy” in News to Note, December 31, 2011: Year in Review) have nearly secured Au. sediba’s place in the public mind. Berger’s plans for the future should make that a certainty.

“The world is going to be able to watch and interact live as we expose this discovery,” Berger explains. Karabo is to be released from his rocky prison at a laboratory studio being built by Berger and the National Geographic Society at Maropeng Visitor Centre in Gauteng, South Africa. The excavation will be open to interactive public viewing online. In addition, major museums (yet unspecified) worldwide will even be equipped with “virtual outposts” allowing visitors to control cameras and microscopes in the laboratory. Berger says, “The public will be able to participate fully in Live Science and future discoveries as they occur in real time—an unprecedented moment in palaeoanthropology.”4

The pits at Malapa Cave north of Johannesburg, South Africa, have already yielded portions of an australopithecine female and a young male, but Berger says there is evidence of at least six individuals in the cave. What’s in the rock? Berger explains, “There's also the possibility that we have two bodies that are intertwined [in the rock]. Part of the fun of this project is that as soon as we find out, the world will find out with us.”

The internet will likely achieve for Karabo the kind of fame that Lucy’s discoverer (Donald Johanson) could only have dreamed of. But as with Lucy, it is only the speculative interpretations of evolutionists that are making the media splash, not the actual scientific observations. What can be observed in both cases are the skeletal characteristics of some extinct varieties of apes. Not only are the millions-of-years claims based on unverifiable assumptions, but so are the claims that an ape-like ancestor could evolve into a human. None of the skeletal characteristics revealed in sediba’s analysis are transitional forms en route to becoming human but only minor variations of features found on apes. And as with Lucy, speculation about how sediba could have used its hands and how it walked are based on highly speculative interpretations of the data. The imagination must connect the dots—ape characteristics and how “primitive” Homo species are presumed to have lived—to paint Karabo as the “missing link.”

God created land animals and the first two humans supernaturally on the sixth day of Creation Week. Humans were not made from animals, and only humans were made in the image of God. Man is unique physically, mentally, and spiritually. Any similarities shared with apes occur because we share a common Designer, not a common ancestry. “The answer” is in Genesis, not in South African rocks.