The “most alien life-form yet”—also known as GFAJ-1—has faced an uphill battle since first being described in Science in 2010. This little bacterium-that-could from arsenic-rich Mono Lake captured NASA astrobiologists’ attention in 2010 due to its apparent ability to evolve into an arsenic-dependent organism. Researchers initially thought GFAJ-1 was capable of rewriting the standard recipe for DNA when forced to subsist on arsenic instead of phosphorus, a key constituent of DNA. The toxic lake was made to order in the wake of a challenge from Paul Davies of Arizona State’s BEYOND Center for Fundamental Concepts in Science. The picturesque California lake seemed to be the perfect place to search for arsenic-based microbial life. Davies suggested the existence of a “shadow biosphere” full of alternative life-forms that evolved through “an independent genesis.”1 Such a discovery would support expectations, he contended, that bizarre alien life had also evolved.

Many searching for aliens are sure that life evolved on earth and therefore must have also evolved elsewhere. The BEYOND Center’s website, for instance, states, “If life has formed at least twice on Earth, it is certain to be common throughout the galaxy and beyond.”2 Davies has since rejected the possibility that GFAJ-1 represents that “shadow biosphere” because, he said, “It was clear from early on that GFAJ-1 did not constitute evidence for a second genesis.” Nevertheless, research has continued as experimental science has been in full swing to see if the original research on the Mono Lake bacteria could be replicated.

Originally, astrobiologists grew GFAJ-1 in progressively more phosphorus-poor conditions, forcing it to adapt. They thought it had incorporated arsenic into its DNA and even become dependent on the ordinarily toxic element. Now two new studies published in Science have demonstrated that GFAJ-1 actually did not bond any phosphorus into its DNA but only managed to subsist on infinitesimally small amounts of phosphorus. There was in fact a minimal amount of phosphorus without which GFAJ-1 could not survive. And the apparent dependence on arsenic was probably just dependence on an amino acid contaminating the arsenic solution. This is the way experimental science operates, performing repeatable controlled experiments, which in this case have called into question the original suspicions about the nature of this microbe. 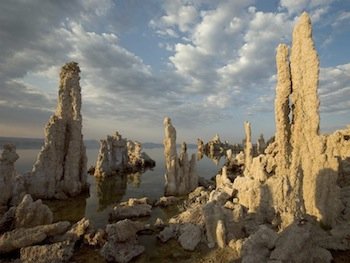 Beneath the other-worldly beauty of Mono Lake’s calm reflections and limestone formations lurks a toxic arsenic rich environment and GFAJ-1, a hard-to-kill microbe that excited a good deal of thought about alien possibilities. Photograph by Phil Schermeister, National Geographic, from National Geographic.

Reports about GFAJ-1 make frequent use of the “e word.” For example, “Over multiple generations in the lab, scientists forced them to evolve further, gradually ramping up the arsenic concentrations while lowering the amount of phosphorus available to the organisms” (emphasis ours). And, “This suggests they have nothing to do with a newly evolved tolerance to arsenic” (emphasis ours). Yet never was there any change remotely suggestive of molecules-to-man evolution. These bacteria simply displayed their ability to vary within their created kind. They never acquired genetic information to become a new kind of organism. They never became non-bacteria.

Far from evolving, GFAJ-1 displayed its remarkable adaptive ability. As the authors of one of the follow-up studies noted, microorganisms surviving extreme conditions like those in Mono Lake face the challenge of discriminating against a “highly abundant but toxic chemical mimic”3 in order to incorporate only the required genuine compound. They explain, “Organisms typically adapt to such conditions not by incorporating the mimic in place of the essential salt but by enriching for the [essential] salt at multiple stages, from preferential membrane transport to the selectivity of metabolic enzymes.”4 Furthermore, the DNA did not bond any detectable arsenic into its structure. The researchers write, “The end result is that the fundamental biopolymers conserved across all forms of life remain, in terms of chemical backbone, invariant.”5

Furthermore, even if arsenic-based microbes had been discovered, they would not be evidence for molecules-to-man evolution, either terrestrial or extraterrestrial. There would be no evidence they had evolved from non-living elements. They would simply be examples of an unusual created design. As it is, Davies of the BEYOND project has dismissed GFAJ-1’s as proof of an alternative line of evolution because he assumes these bacteria are already in the evolutionary line of existing bacteria. But the random emergence of living things from nonliving components has never been observed, neither conventional life-forms nor biochemically aberrant ones. God created all kinds of living things about 6,000 years ago and equipped them to vary within their kinds to adapt to changing environments but to only reproduce after their kinds. Nothing in science has demonstrated anything to the contrary.

Previous Article News to Note, July 14, 2012 Next Article Can Karabo Catch Up with Lucy's Legacy?