From Frustration to Blessing!

by Dale Mason and Ken Ham on May 1, 2006
Featured in Answers Update
Share:
Email Using:
Gmail Yahoo! Outlook Other

Finding a biblically-based and explicitly young-earth science curriculum for homeschoolers is not difficult any more. We now have the God’s Design curriculum series.

We hear it all the time. A parent calls or writes—or looks into the eyes of one our speakers—and pleads, “Everywhere my children turn, they’re told that science has proven evolution and the world is millions of years old. Help! I need to teach them the truth about science!”

In 1999, Debbie Lawrence found herself in a very similar situation.

An “ordinary” homeschool mom, Debbie loved teaching her grade-school-aged children. But as she tried to find a biblically-based (explicitly young-earth) science curriculum, her search came up short. 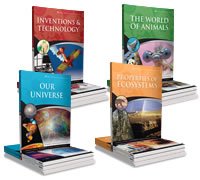 Debbie’s frustration soon became the genesis of what is now known as the God’s Design curriculum series.

It is no surprise that parents of public school children are also greatly frustrated at the evolution-based belief system that is presented so incessantly as undeniable fact. They’re concerned as they watch grade schoolers turn into high schoolers and then see them turn away from their faith, often because the “truth” of evolution has convinced them that the Bible is not true.

Sadly, these students aren’t being taught how to correctly understand science. AiG, through lectures and resources (such as curricula), can help overcome this problem by teaching students correctly about this subject. For example, the word “science” actually means “knowledge.” Now, you can have knowledge about the present or knowledge about the past.

We can better understand it this way:

Observational science is what you can observe in the present and test with repeatable results.

This is the science that is the basis for our modern technology. As scientists tested metals, developed an understanding of electronics and so on, jet airplanes, space shuttles and computers were invented. By experimenting with bacteria and viruses, doctors gain an understanding of diseases and how to treat them. So, both creationists and evolutionists have the same “observational science.”

Historical (or origins) science is a person’s belief about origins.

This kind of science is not based on direct observation or repeatable testing. It has nothing to do with developing our technology—it deals with the realm of belief. Creationists and evolutionists have different approaches to “historical science.”

An increasing number of parents desire easy-to-use books, DVDs and other resources to help them counter evolution dogma and teach science correctly.

Because a comprehensive, Bible-based science curriculum from a young-earth perspective was needed, Debbie and husband Richard (who are both trained engineers) began the enormous undertaking. Their goal: to create a series of textbooks that would captivate and challenge students but that would not overwhelm the parent/teacher. The books would be specifically for homeschool situations, but would also be easily used to supplement what kids hear at public school (and also through the media).

Debbie’s odyssey eventually led to the research and writing of 11 textbooks in five years.

Born out of the concern of a mom and dad for their own children, the God’s Design science textbooks have received outstanding reviews from educators nationwide. And they’ve received tremendous initial reception at AiG events!

Because Debbie was in the process of teaching multiple ages and needed practical, easy-to-teach lessons that could be adjusted for use in grade school through junior high, each lesson includes a fun hands-on activity (using supplies found in most homes) and works with multiple ages.

Parents are serious about training their children, and they long for materials that are built upon the same “presuppositional” approach to Scripture that all AiG speakers teach as they travel around the globe—and a curricula that teaches students how to think correctly about the world.

It has been years of hard work by Debbie and Richard Lawrence to complete this task and fulfill their goal (as they stated in the curriculum) of “ ... teaching our children the truth of the Bible and how to evaluate evidence. When rightly interpreted, the evidence actually confirms the biblical creation account.” In addition to presenting their information within a young-earth context, they ensure that children will have fun doing experiments.

We expect that the God’s Design series of textbooks will serve as the foundation for AiG’s curriculum development for homeschools and Christian schools, and as supplemental science instruction for public school students (at home).

The Lawrence’s excellent work will be enhanced even more by AiG staff.

In addition, we have just published a major new textbook built around the classic The Pilgrim’s Progress by John Bunyan. This too is an amazing project, developed and illustrated exclusively by AiG staff members. But that’s another story! (Visit our bookstore, where this large-format book is pictured and described more fully.)

Previous Article The End of an Era, But … Next Article Taking Back Astronomy