I had the privilege last month to attend a memorable celebration service in San Diego for a hero of the Christian faith. That hero was Dr. Henry Morris.

This man, I believe, belongs in the list of Christian giants like Luther, Wesley, Whitefield, Spurgeon and others.

At age 87, Dr. Henry Morris—who is recognized as the “father” of the modern creationist movement—went to his well-deserved rest with the Creator that he wrote and spoke so much about.

I first heard of this Ph.D. hydrologist in 1974, when a friend at our church in Australia (who knew I was searching for answers to questions about evolution and millions of years) told me about a book that had been published in America. It was called The Genesis Flood (co-authored by Dr. Morris and Dr. John Whitcomb), and it would later be recognized by the famous evolutionist Stephen Jay Gould of Harvard as “the founding document of the creationist movement.”1

In my search for this book, I went to the only Christian bookstore I knew of in the city of Brisbane and asked the manager if he had heard of The Genesis Flood … and if he carried it. He did! (I found out later that the bookstore’s owner—who is now with the Lord—had a real burden to ensure this book was in his store).

The answers in this book thrilled my soul. In fact, the Lord burdened me intensely to obtain whatever creation/Flood books I could from around the world—and then to tell as many people as I could about these answers.

To cut a long story short, reading The Genesis Flood was the beginning of a creation ministry that started in our home and then spread around the world.

I had the awesome privilege of working for Dr. Morris for seven years at the Institute for Creation Research in California, before three of us (Mark Looy, Mike Zovath and I) founded the Answers in Genesis ministry (with Dr. Morris’ blessing—he actually gave one of the very first donations to help us).

I recall Dr. Morris once sharing with me that trying to reclaim a culture for biblical truths through writing and distributing books such as The Genesis Flood would be a long-term challenge. It would not take place overnight. After all, it had taken 150 years of intense evolutionary indoctrination to get where we are today: a thoroughly secularized culture, saturated with moral relativism.

In the late 1950s, the Lord burdened him (and Dr. Whitcomb) to write this monumental achievement, one that will go down in history as the book that launched a movement that has spread around the world.

Dr. Morris understood that for a culture to truly embrace the accuracy of the Bible, the teaching needed to be at a grassroots level. Thankfully, he lived to see the modern creation movement that he started as it grew worldwide, with organizations in numerous countries (with hundreds of resources available in scores of languages)!

As we stand on the shoulders of this soft-spoken giant of the Christian faith, we see that the grassroots effort is working. The secularists now have to meet regularly to devise ways to combat biblical creationists, and secular science museums are spending millions of dollars to re-emphasize belief in evolution and stop the spread of the life-changing creation/gospel message.

In the middle part of the 20th century, there was very little material available to answer the secular scientists and their evolutionary attacks on God’s Word. That changed with the 1961 publication of The Genesis Flood. 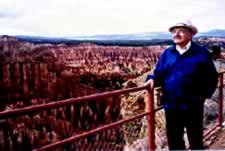 Dr. Morris at Bryce Canyon, Utah, a place bearing testimony to the carving power of the receding waters of Noah’s Flood.

Today we live in an era where, as a result of this great hero of faith, there is now a plethora of resources (books, tracts, DVDs, curricula, etc.) that are being disseminated all across America and around the world.2

Dr. Morris was a pioneer. And like those who came after the frontier pioneers, we now live in a time where we can build on the groundbreaking work of the previous generation, and move the biblical creationist campaign forward—which at its core is the proclamation of the gospel message, which begins in Genesis!—to a whole new level of effectiveness.

Yes—it’s the end of one era, but the beginning of another, as the Lord has entrusted to this generation the faithful preaching of His Word, and the pulling down of strongholds (2 Corinthians 10:4).

Previous Article Christianity: Child Abuse? A Virus? Next Article From Frustration to Blessing!