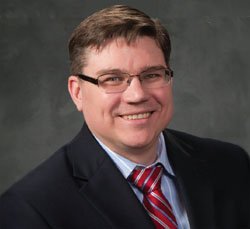 For many people, the word Siberia conjures up images of frozen tundra with frigid winds and hard soil. But for Evgeny Bakhmutsky, it was home—and a fertile ground for the gospel. Born in the region in 1976, Evgeny credits his grandparents with helping lay the foundation of his faith, starting in Genesis. “I wanted to serve the God who created light.”

Though only in his early thirties, Evgeny was appointed youth director—and then first vice president—of the Union of Evangelical Christians-Baptists of Russia, which has half a million members and is growing. Evgeny’s hard work, God-given gifts for organization, and unswerving dedication to God’s Word were key factors—along with his vision.

When he went off to state school as a young boy, Russia was still under atheistic Marxist rule. Evgeny excelled in his studies but found it difficult to reconcile the classroom version of human origins with the Bible. At thirteen, a brochure by Dr. Henry Morris (the late founder of the Institute for Creation Research) opened his eyes to how accurate Scripture is.

Displaying a remarkable zeal to overcome any challenge with his work ethic, Evgeny became the first person in his family to attend college, though he later left to study theology at a Baptist Bible school and then seminary. Passionate especially about reaching the youth in Siberia, Evgeny spoke out about biblical authority at every opportunity. He preached on the streets, in churches, and on radio and TV.

His biblical message was so successful—especially at reaching youth—that he received death threats. Unintimidated, he has never stopped speaking and advocating the absolute truth of God’s Word among the next generation of Russians, who are hungry and open.

In 2009, along with his other tasks, he helped plant a Bible church in Russia’s capital, Moscow, that already reaches more than two hundred people—a very large number in a nation long under the sway of secularism and Russian Orthodoxy. But immense challenges remain—mainly because the harvest is so ripe. “In our church, we have more non-Christians than we can handle because they are so eager to hear the truth.”

Evgeny believes that an integral part of the modern church’s message must be a bold proclamation of a young earth and six-day creation because it helps people to know who they are and why they need the Savior. According to Evgeny, Russia has a wide diversity of people—from Muslim to atheist—who need the gospel from its very beginning.

But the work of teaching and training must be done slowly and patiently. Because Russia has weathered the rise and fall of czars and communists, Evgeny thinks in terms of lifetimes, not hours or weeks. “Russians want not just a conference and fireworks. But we must work slowly. . . . A brand new generation has never heard the gospel.”