A Souvenir of Change

An Open Letter to My Creator

Yesterday I visited a special place in beautiful Petersburg, Kentucky. Waiting for me, nestled among the green hills and winding paths, sat a beacon of evidence and resources designed to bring you glory. I had finally returned to Answers in Genesis’s Creation Museum.

My first visit to the Creation Museum was five years ago. I came as a father with his family on vacation. As we left, we all purchased a souvenir. Little did I know that my souvenir would serve as catalyst for change.

On that day, I bought my first book on evangelism (Dare 2 Share by Greg Stier). My library now holds 23 books geared specifically toward sharing the gospel. This change has been nothing of me; it’s a testimony of your passion, power, and patience.

Father, you know that I was struggling to be obedient to tell people about you.

Father, you know that I was struggling to be obedient to tell people about you. I recall tearing out pages of an Our Daily Bread devotional and placing them for the lost to find. Also, I would awkwardly give gospel tracts once in a while. I needed help; I needed direction.

The museum provided resources and an opportunity to get me on my way. My wife noticed a flier by the cash register in the museum’s book store that day; it was a call for street evangelism volunteers to go to Vancouver, B.C., Canada, for the 2010 Winter Olympics. In retrospect, this was the help and direction I hungered for.

In Vancouver, you solidified in my heart 1 John 2:2. Indeed, you are “the atoning sacrifice for the whole world.” It was on this trip that you called me to get formal theological training despite a lack of clear direction. For these things I will never be able to fully communicate my thanks to you or AiG. Please help me to help other believers speak of you to a lost and dying world. 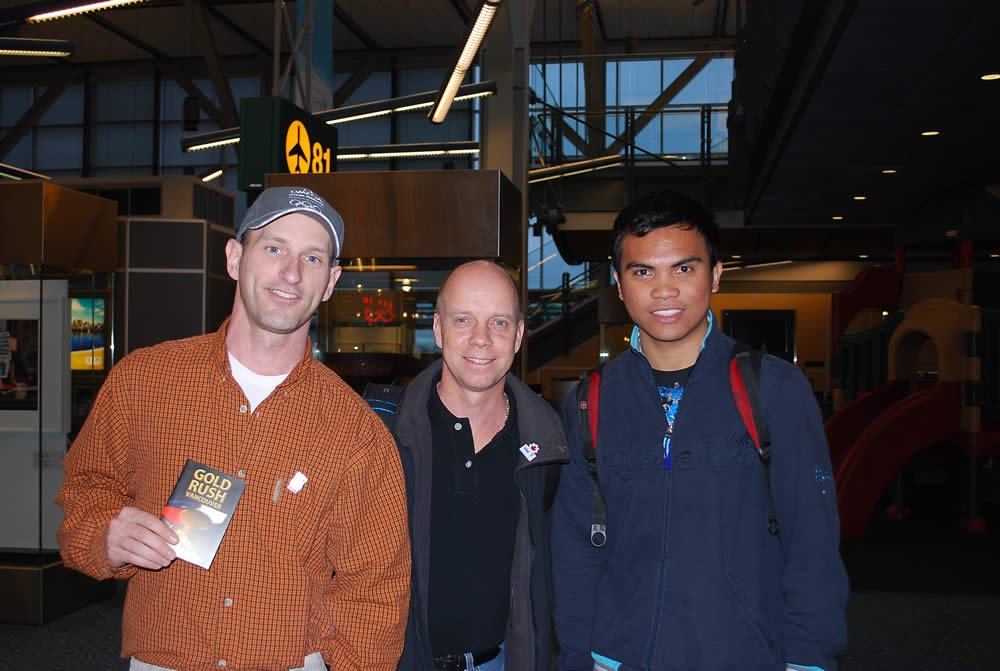 Here is Scott Seigman (left) about to give an AiG witnessing booklet to Olympic gold medalist Scott Hamilton (middle) at the conclusion of the Vancouver Olympics in 2010. Seigman shared the vision of AiG’s evangelistic outreach at the Games with Hamilton, who responded that he "really appreciated what they all did” in Vancouver.

My introduction to Living Waters gospel tracts on the trip was a welcome resource for witnessing and coming alongside others to help them do the same. I was somewhat familiar with Ray Comfort and Kirk Cameron’s ministry, but I didn’t know much about their resources. I quickly discovered that their “million dollar gospel tract” would become an invaluable tool to evangelize in my own backyard.

Upon arrival home from the Olympics, you burdened me to get the gospel out in a myriad of ways locally: (1) Free Pro Skateboard Demo Gospel Outreach, (2) NFL Punt, Pass, and Kick Contest Gospel Outreach, and (3) Intentional street evangelism in my community (such as gifting quarters to “show the love of Jesus” at the local coin laundry, along with an introduction to you and an invitation to church).

One constant that has been encountered is the barrier of unbelief.

One constant that has been encountered is the barrier of unbelief. I have observed two keys to breaching this barrier: (1) pointing to God’s law and (2) pointing to creation. Your law automatically speaks to mankind’s conscience as you wisely wrote it on our hearts. A fine example would be a man I met in a London park. His arms hosted a plethora of atheistic and evolutionary-inspired tattoos. To say that you provided a natural conversation starter would be an understatement. This self-described “student of science” was humbled by the law. I shared how AiG utilizes archeology, biology, and so on to communicate that creation cries out that there is a Creator. The Holy Spirit stirred his heart. He left with a handshake, ensuring that he would check out AiG online.

As is the case with most unsaved people I have encountered, this man’s ultimate authority was self. God’s law and creation evangelism breached his self-filled authority to the point that he was willing to explore biblical authority. Little did I know that my souvenir book would be used to share Jesus with an atheist across the Atlantic Ocean.

There is a treasure trove of AiG resources to point the lost to you. Ken Ham’s gospel booklet “What Really Happened to the Dinosaurs?” is one resource that you have used for me to reach skeptics, the millennial generation, and intellectuals that have been indoctrinated in a non-biblical worldview.

Some choose to reject you as they are blinded by their choice to pursue a life of sin versus repentance.

Your Word proclaims, “Go into all the world and preach the gospel to every creature” (Mark 16:15). I think of the souls you’ve allowed me to share the gospel with abroad, and to encourage brothers and sisters in Christ to action. There was street evangelism in Northern Ireland with my wife and children, the 2012 London Olympics with AiG, and Super Bowl XLVII in New Orleans and the 2014 Winter Olympics in Sochi, Russia with Outreach Bible Project. No matter where I have traveled to evangelize, in general the reaction to creationism seems the same. I am sad to say that most people suppress thoughts about you; however, despite the local, when I have asked many souls to gaze upon one of your sunsets or look upon your waters and ask, “Do you think that just happened without a Creator?” I have seen transitions to “there may be a God.” Some choose to reject you as they are blinded by their choice to pursue a life of sin versus repentance. Some surprisingly have no idea of who Jesus is. A major take-away for me is this: all we can do is tell people about you (at home and abroad despite the obstacles).

Northern Ireland has historically been a region embattled over religion. This provided a unique hurdle in transitional dialogue to things of you. The Super Bowl was a party atmosphere where many came to worship the god of sport. The Olympics were a blessing in that approximately 200 nations were ministered to in one geographic location; however, there have typically been threats of terrorism. Despite these unique challenges, you have shown yourself great for your glory.

Important to note is that people are still responding to the gospel and trusting in you. Despite the geographic location, creation apologetics is essential as today’s society is challenging the book of Genesis. If the church compromises on Genesis, it puts your entire Word on trial. Thank you for breathing all of Scripture.

I boast only on you, Lord. I simply reflect on these outreaches to give you praise for the radical change you orchestrated and to encourage brothers and sisters in Christ to action. 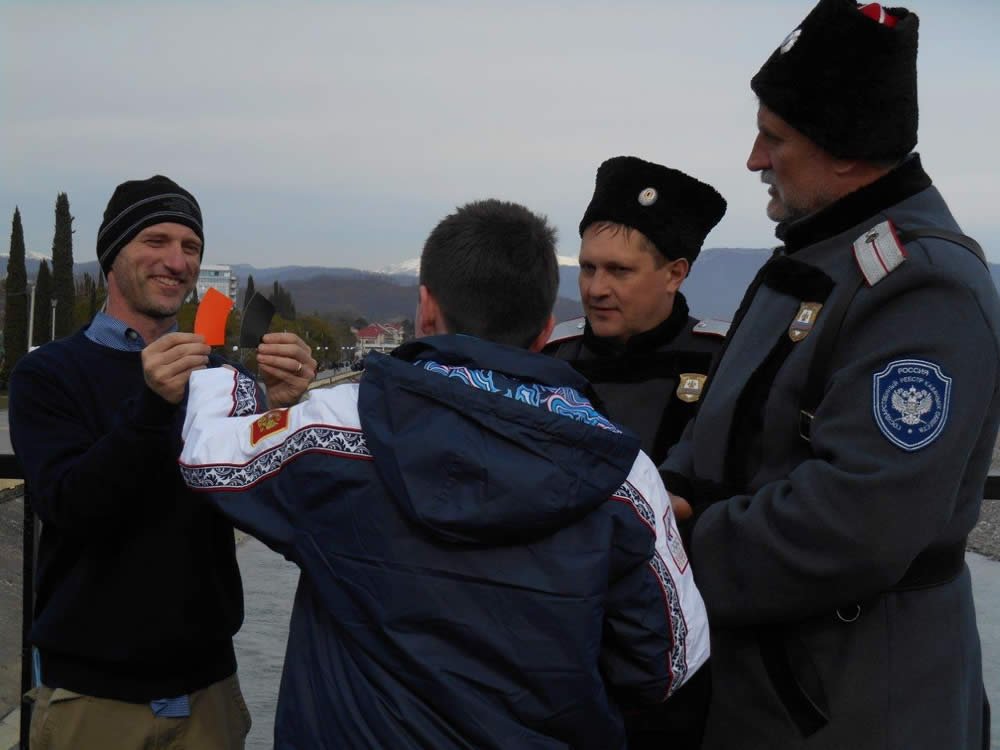 Scott sharing the gospel in Russia at the Sochi Olympics earlier this year, using a Living Waters “curved illusion” tract.

Thank you again Father for your protection in Russia. I was so fearful before going. Prior to those Olympic games, international fear and discord were the order of the day. Despite the travel warnings and a general climate of alarm, you provided the peace that passes all understanding and the gospel was proclaimed.

I think of all of your children who are persecuted daily around the world. Please help believers to embrace their freedom to witness here in America. As Pastor John Piper would say, “Don’t waste your life.”

I’ll never forget the day you put on my heart a grassroots effort to share the gospel during the X Games. The outreach this past June in Austin, Texas was surely by your grace. It amazes me how you took a burden and brought it to fruition. AiG’s Mark Looy, Living Waters’ Eddie Roman, Sports Fan Outreach International’s Bill Adams, and Outreach Bible Project’s David Hardin lovingly embraced the vision. 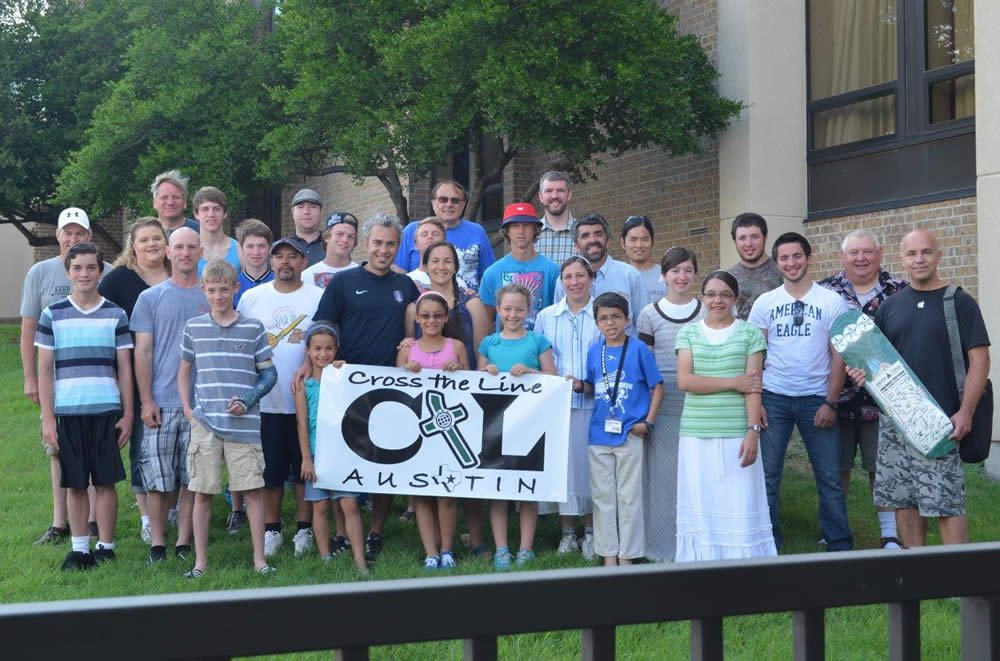 Here is Scott’s volunteer evangelistic group that shared the gospel with thousands at the X Games in Texas last June.

Outreach attendees were offered training, resources, and the opportunity to share the gospel during the X Games in Austin and returned to their local church to replicate. Thank you for using those 39 folks from six different states to reach the millennial generation and all others encountered.

The X Games effort, Cross the Line Austin, was a vehicle to meet believers where they were and help them take the next step to cross the line of fear to witness. Praise you for the participants’ daily goals ranging from being a silent prayer partner, engaging in one-on-one evangelism, gifting Bibles and AiG and Living Waters resources, to preaching in the open air in a loving biblical manner. It was a joy to observe the evangelism teams love you and others (such as gifting bottled water and pizza at a skate park, coupled with the preaching of the gospel).

What a difference five years makes! Yesterday I returned to the Creation Museum as a guest speaker to address the AiG and museum staff; I felt so unworthy. Thank you for your blessings despite my unworthiness. Please show me my next step. 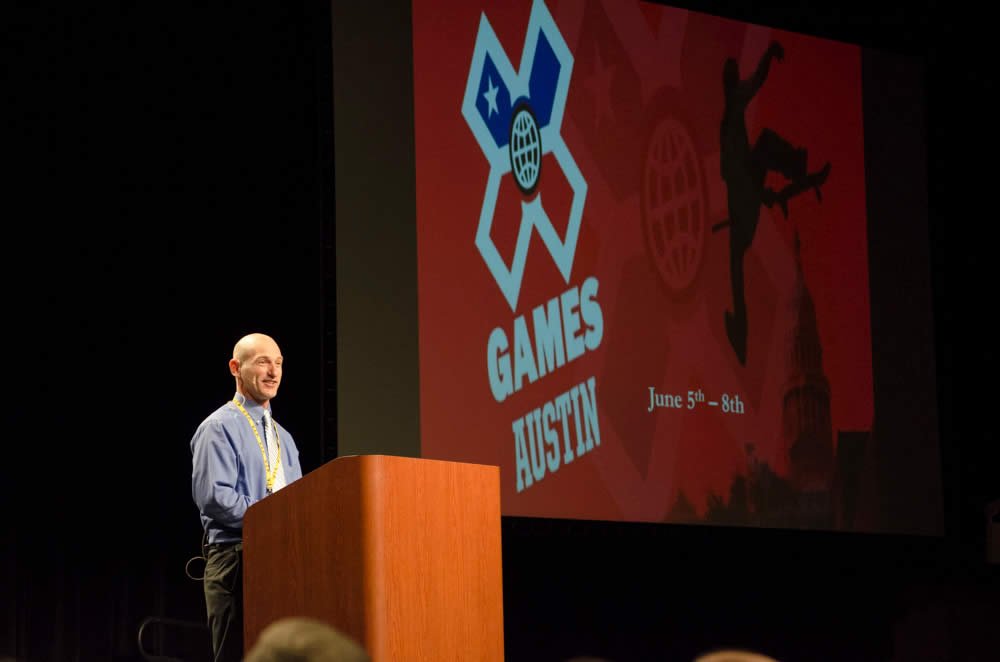 Scott speaking to our staff earlier this year, when he shared how he uses gospel literature from AiG and other ministries.

I pray that believers, and unbelievers, would find their way down Bullittsburg Church Road in Petersburg (near Cincinnati) to enjoy a day of exposure to the truth at the museum. May they come and recognize your undeniable handiwork as they observe the beauty and diversity of insects in Dr. Crawley’s Insectorium. As visitors culminate their visit, I pray that they would take advantage of The Last Adam video. This parting film is a high-caliber production that points to Jesus Christ and the sweet gospel. Will the non-believer accept or reject the gift? Will the believer give thanks for Christ’s sacrifice as they exit the museum’s doors? I pray that souls will be saved. I pray that believers will echo the evangelistic thrust of the Creation Museum. I ask that believers will take advantage of the resources through Answers in Genesis and Living Waters. I humbly pray for revival.

Your Word tells us that you will give the boldness and words; help us to go.

Lord, thank you for my family, my local church, ministries that aid believers to herald the gospel, and for this open-letter opportunity to encourage believers to not be ashamed of you and share the good news. Finally, thank you for the Cross and the call for all believers to evangelize. Your Word tells us that you will give the boldness and words; help us to go.

Editor’s note: To find out more about the evangelistic Creation Museum, go to CreationMuseum.org. Pray that God would embolden more museum visitors like to Scott to share their faith using AiG resources.