A Living Canvas for the Creator 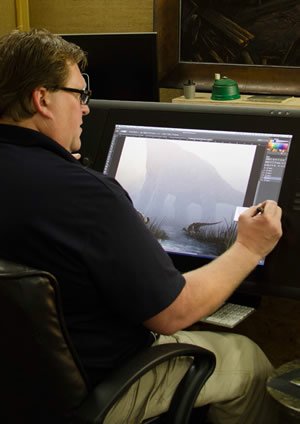 Despite long hours at his job, Jon Taylor can’t stop illustrating biblical truth when he shuts his office door.

While Jon Taylor was crossing a four-story-high beam at a construction site, a gust of wind picked up a large piece of insulation and wrapped it around him, toppling him 45 feet to the concrete floor. It was the first of a series of divine appointments that set Jon on a path he never could have imagined.

During the long recovery, he recognized he had been running from the Lord. Like the potter reshaping a marred vessel, God was using the accident to reshape Jon for His own use.

One day while bedridden and bored, Jon asked a family member to bring some art supplies to him. Later, when she saw his artwork, she encouraged him to develop his talent for the Lord. Jobless and penniless, how could he proceed? A forgotten retirement account enabled him to enroll at a Christian college, where he earned an MA in commercial art.

Jon was always inspired by his father’s evangelistic “chalk talks.”

While he was returning home from college with a car full of artwork, a pastor friend insisted he meet some people at Answers in Genesis. Jon ended up showing his artwork to the vice president, but did not receive a job offer.

For six months he worked in landscaping, wondering what was next, An art studio hired him, and for two years he did artwork for major toy companies such as Fischer-Price, Hasbro, and Mattel. Why wasn’t God rewarding his desire to illustrate the Bible? Then an economic downturn cost Jon his job.

The Creation Museum called the next day, and Jon recognized the reason for his time at the studio. “I was under the best artists in the United States for those two years, and I needed that experience for the museum.”

He eventually became the art director on the team building the Creation Museum, and now he’s a lead production designer for the upcoming Ark Encounter.

Despite long hours at his job, Jon can’t stop illustrating biblical truth when he shuts his office door. Growing up in Brazil with missionary parents, Jon was always inspired by his father’s evangelistic “chalk talks” at churches he planted in São Paulo. About five years ago, a women’s conference organizer in Brazil asked him to give a chalk talk, and the ministry bug bit him.

Jon started an outreach called Living Canvas, painting at camps and conferences. In a technological twist, he delivers his artistic devotionals on his computer screen. A favorite talk brings to life a potter and clay to illustrate how the gospel of Jesus Christ enables us to glorify the Creator with our talents.

“Ephesians 2:10 tells us we are God’s workmanship. We may start on the wrong path, so God reworks us and then restores us, molding us to be more and more like His Son.”