by Pam Sheppard on May 24, 2007
Share:
Email Using:
Gmail Yahoo! Outlook Other

The building process of the Creation Museum was more than simply another construction site—it was a witnessing field.

Since becoming a Christian seven years ago, Ray Butler had been praying for his 19-year-old son, Donovan. They had not spoken for 11 years, and he was praying that they would someday be reunited. Over the years, his prayer changed as a reunion seemed unlikely to happen. Instead, he prayed that he would one day hear that his son had become a man of God.

Both of Ray’s prayers were answered last month when Donovan received Christ in his heart. Donovan attributes several things to his newfound faith: his 3-month-old son being on life support and working at the Creation Museum.

Unaware of what had taken place the day before at church (and in God’s perfect timing), Larry Sweet, a full-time plumber for the Creation Museum, gave Donovan his first Bible. Before he put his faith in Christ, Donovan says he never wanted to read anything. Now the Bible is all he wants to read. 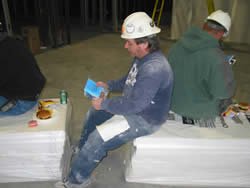 Donovan is one of the many contractors who have helped build the museum over the years. And he is just one of a dozen or so contractors (that we know of) who have been “saved” during the building of the museum.

From the time the Creation Museum was just a vision, this one-of-a-kind facility was designed to be an evangelistic outreach like no other. But the efforts to proclaim God’s glory and the truth of His Word from this place didn’t have to wait until the doors open on May 28. Evangelism has happened from the inside out.

“We used the architectural planning time as an opportunity to explain the scope of the museum to the folks who were drawing up all of the plans by going through the Seven C’s of History, our storyline for the museum,” says Mike Zovath, vice president of the Creation Museum and one of the ministry’s founders. 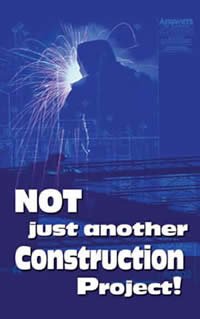 “This gave us a way not only to explain what we needed structurally and visually for the museum, but also gave us the opportunity to present the gospel as part of the natural progression of the storyline,” adds Mike.

After the design phase, it only seemed natural to carry this passion to reach the lost with the life-transforming message of the gospel to those laying the foundation and erecting walls. Back in 2003, the ministry’s leadership team decided to do something special for these workers—to have a luncheon in their honor, complete with a tract designed just for them.

Put together by the museum’s scriptwriters and lead artist, the booklet explained the vision and storyline of the museum and the worker’s important role in building it. Because it included photos of the construction workers, each person anxiously looked through the entire booklet and later passed it along to family members and others. Again, it was another chance to get the gospel into the hands of lost sheep. 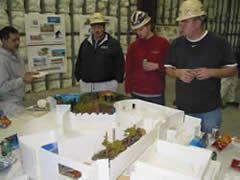 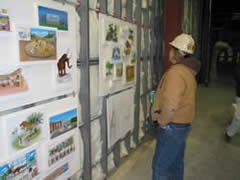 Throughout the museum’s construction phase, numerous AiG employees have shared their faith with and ministered to their co-laborers. In the past year, several temporary staffing agencies and numerous subcontractors have supplied over several hundred skilled labor workers. Employees like Steve Bruns conducted a morning Bible study for the contractors, allowing time for praises and prayer requests. 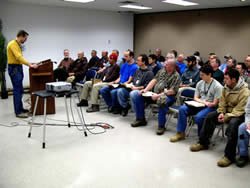 Just in the last year alone, over a dozen contractors have professed Christ as their Lord and Savior—people like Steve Menefee who says that “he came to the museum as a sinner, and now, thanks to witnessing from AiG staff members, LeRoy LaMontagne and Kim Hoffman, he’s one of God’s saints.”

Even the secular media has taken notice of this unique “on-the-job” evangelism in a front-page Cincinnati Enquirer article, Creation Museum touches lives: Workers sharing faith even before building opens.

While much of the work completed at the museum by these contractors has been temporary, the results of the witnessing they have received will last for eternity. For Donovan, who says he initially didn’t want to take the job at the museum (he was afraid of it, he told us), he says it turned out to be the best job he’s ever had—from the people to the environment to the quality craftsmanship that goes into everything. He says he wishes that he could continue working at the museum for a few more years.

Please continue to pray for these workers as they show the fruits of their labor to their families and friends as they come to the contractors’ open house on Thursday, May 24. May their eyes and hearts truly be opened to see the handiwork of God and the marvels of His creation.

Pam Sheppard earned her B.Sc. degree in journalism from Ball State University in Indiana and has written for numerous Christian publications. She joined Answers in Genesis—USA as a researcher and writer in 2004 and now serves as National Editor for Answers magazine.