Riding the rapids between the mile-high walls of the Grand Canyon, a rafter supposedly peers up at millions of years of earth history. How do scientists arrive at such an old age? And is the worldwide geologic column really a clincher for the long ages required for evolution? 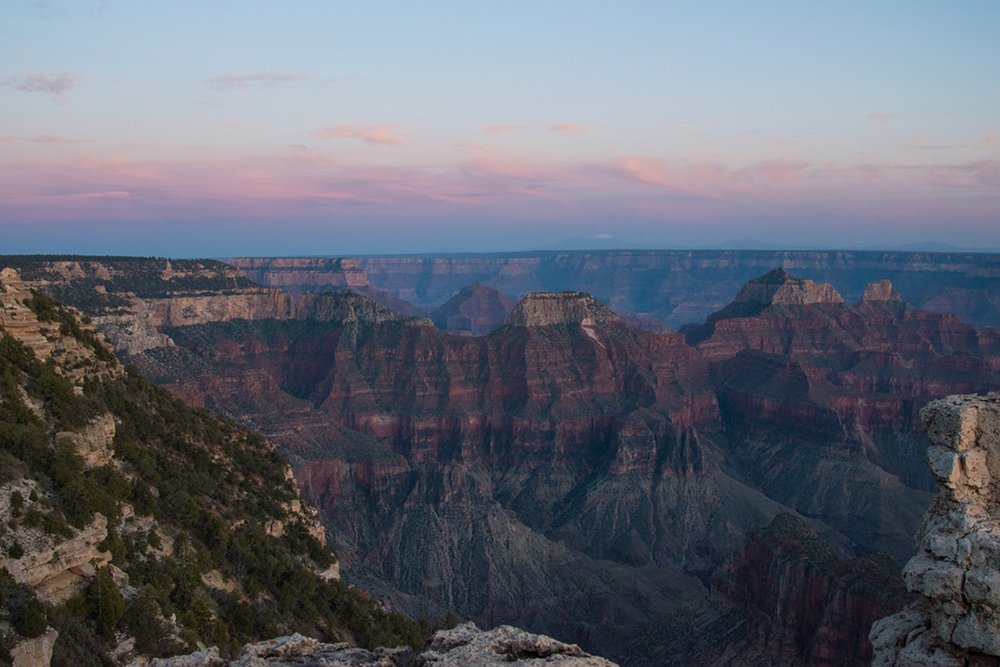 Old as the Hills

Before we get overly worked up about the age of the earth, let’s take a moment to number our own days (Psalm 90:12). We only live about 70–80 years. What percentage of your life has likely passed? Our lifespans are a breath, our knowledge is finite, and our claims are fallible. The Creator asked one who questioned him, “Where were you when I laid the foundation of the earth? Tell me, if you have understanding” (Job 38:4).

We should begin our search for the age of the earth with humble recognition of our limits paired with confident faith in the Creator and his Word (Hebrews 11:3, 6). Starting with the creation account and genealogies given in the Bible, we can use fairly straightforward addition to figure that the earth is about 6,000 years old. That’s merely a few billion years difference with mainstream science, which dates the earth’s age at 4.5 billion years. Rocks don’t come with ready-made age tags, of course. Interpretation of time periods in the geologic column depends on one’s worldview.

Old-earthers are guided by a uniformitarian view—that processes on earth happen in the same way through time, generally at a uniform, slow-and-gradual rate. They think that the present is the key to understanding the past. Today, we see that rock layers form very slowly through natural processes like erosion sweeping sediment from one place and depositing it in a layer somewhere else. So an old-earther would take that snail’s rate of accumulation and calculate millions of years for the stacks of sedimentary rock to form.

Old-earthers think that the present is the key to understanding the past.

A young-earther points out that catastrophic events can form sedimentary layers at a dramatically accelerated rate. A modern-day example is the eruption of Mount St. Helens in 1980, which formed a rock unit 25 feet thick, composed of thousands of thin sedimentary layers, in mere hours. While scientists usually assume that slow, gradual processes cause thin layers, our observations prove otherwise in this case. After a later eruption on the mount, a mudflow rapidly carved a “Little Grand Canyon” up to 140-feet-deep.

The eruption of Mount St. Helens was a local event, but it shows how quickly rock layers and geological structures could form in a global catastrophe. Early in the biblical book of Genesis, we find a historical record of the worldwide flood in Noah’s day (many cultures also have accounts of the flood). Using the genealogies and dates given in the Bible, we know the flood happened about 1,500 years after creation and about 4,500 years ago.

A worldwide flood would mean millions of dead things buried in rock layers laid down by water all over the earth. And that’s exactly what we find. The flood accounts for most of the fossil-bearing rock layers. Scientists have recently discovered that mud particles in rapidly moving water can clump together (as floccules) and be quickly laid down in multiple layers.

Dr. Andrew Snelling, a geologist and researcher for Answers in Genesis, gives the following six evidences for Noah’s flood:

Scientists used radiometric dating of meteorites to come up with the estimated age of the earth—4.5 billion years. Case closed, scientific proof, right? Radiometric dating involves estimating age by measuring the ratios of two related chemical elements—one that is decaying into another. In high school science class when we first heard odd terms like half-life or parent and daughter isotopes, many of us remember brain fog setting in as we realized we’d have to use math.

Here’s a quick refresher, if needed. Chemical elements are made up of atoms. Each element has a set number of protons and electrons in the atom. But the number of neutrons in the atom may vary. These variations are the element’s isotopes. For example, the element carbon has three isotopes: carbon-12, carbon-13, and carbon-14.

Certain isotopes like carbon-14 are unstable, or radioactive. That’s because the number of neutrons has made the center of the atom, the nucleus, unstable. These unstable atoms are called parent atoms, and they can decay or break down, losing particles such as neutrons and protons, to produce stable daughter isotopes of a different element (since the number of protons and electrons has changed). For example, the unstable parent isotope uranium-238 decays to produce the stable daughter isotope lead-206.

A half-life is the time it takes for half of the parent atoms to decay and form daughter isotopes. Carbon-14, for example, which decays quickly, has a half-life of about 5,730 years. An initial amount of 10 grams of carbon-14 would decay to 5 grams after 5,730 years. The next half-life would reduce the 5 grams to 2.5 grams. This reduction continues until eventually we will not find a measurable amount of the parent carbon-14.

However, rocks do not usually contain carbon. To find a rock suitable for dating that contains appropriate parent isotopes, a scientist may choose basalt, a volcanic rock that forms when magma cools above ground. Another choice is granite, which forms as magma cools underground. These molten rocks are classified as igneous rocks. It is reasoned that the parent isotopes start decaying once these rocks form. Suppose a scientist sends a sample of granite to a special laboratory to be tested. The ratio of uranium and lead found is straightforward data. We don’t have a problem with the observed measurement, but the interpretation. How the radiometric data is interpreted rests on some shaky assumptions:

A helpful analogy for radiometric dating and these assumptions is an hourglass. We can accurately tell how much time has passed only if we know 1) how much sand was in the top chamber at the start of the flow, 2) the sand has fallen through the middle funnel of the hourglass at a constant, measurable rate, and 3) no sand has been removed from, or added to, the hourglass. Because of these assumptions, radiometric dating can seem mathematically accurate, yet far from fact on actual age.

During a period of eight years, the RATE (Radioisotopes and the Age of the Earth) research project found compelling evidence for the young-earth view. For example:

Image from The New Answers Book 3.6

When building a brick wall, we start with the bottom layer and work our way up with successive layers. Similarly, when we look at rock layers, such as in the Grand Canyon, the layers are ordered in succession from the oldest layer at the bottom to the newest layer on top, which is called the principle of superposition. New layers form over older layers.

There were only two or three days of separation between land and animals, rather than billions of years.

So what about the lowest rock layers in the geological record, such as what we find at the bottom of the Grand Canyon? They are designated as having formed in the Precambrian time period. Laid on top of them we find the fossil-rich rock layers of the Cambrian Period, with the so-called “Cambrian explosion” where complex life forms are suddenly found without evidence of evolving. But since the deepest layers are generally absent of megascopic fossils (fossils that are visible to the naked eye), doesn’t that show the passing of billions of years of earth history before animal life supposedly evolved?

The Bible says that God made the land appear out of the water on day three of creation, and he created animals on days five and six of creation. So there were only two or three days of separation between land and animals, rather than billions of years. Knowing that, how do creationists interpret the lowest rock layers? They were likely formed by the uplift of the land rising out of the water on day three of creation (Genesis 1:9–10). Imagine the dramatic force of such an event, on a much larger scale than the Hawaiian Islands erupting their volcanic tops out of the sea. God’s formation of the dry land on day three is likely responsible for up to 30 miles of deep geologic layers, thicker than the layers that the flood laid. Inside these deep rock layers is a treasure of metals, such as iron, copper, and gold, which man has mined for millennia.

In conclusion, studying the rock layers from the perspective of God’s Word gives us a record of the sequence of events in history, most notably from creation through the flood. Far from proving millions of years of geological activity, the rock layers are well explained within the young-earth model.

Building Your House on the Rock

More important than the rock layers under your feet is the foundation you are building your life upon. Jesus, the Creator and Savior, said that a person who hears his words and does them is like a wise man who builds his house on the rock, withstanding any tempest (Matthew 7:24–27). In contrast, a person who hears Jesus’ words but doesn’t do them is like a foolish man who builds his house on the sand. What will happen to that house when the rain pours and the floodwaters rush in? Splat!

The floodwaters of Noah’s day have made their mark, leaving a record in the rocks of death and destruction. Jesus referred to Noah’s flood as a literal event in history (Matthew 24:37–39). The flood was God’s judgment on mankind, a people so violent and corrupt that “every intention of the thoughts of his heart was only evil continually” (Genesis 6:5). Doesn’t this description fit our society, filled with idolatry of fame and fortune, lying, drunkenness, angry outbursts, active shooters, abortion, pornography, and rebellion against God’s plan for gender, marriage, and purity (1 Corinthians 6:9–11; Galatians 5:19–21; Revelation 21:8)?

Our wicked world is about to face another judgment, this time by fire (2 Peter 3:3–7). But as God provided a way of salvation for Noah, he has also provided a way of salvation for us. By faith Noah built the ark and “became an heir of the righteousness that comes by faith” (Hebrews 11:7). God has always and only declared sinners righteous on the basis of faith (Galatians 2:16–3:14). All other religions involve man trying to do good works to approach God. But our best works are like filthy rags to the holy God (Isaiah 64:67).

Instead of trusting our own works, we must trust God’s work of redemption through Jesus. Noah was saved from the flood by entering into the ark through the door. Jesus said, “I am the door. If anyone enters by me, he will be saved” (John 10:9). Now is the time to read the Bible, hear the words of Jesus, and build your life on the Rock of Salvation.

From The New Answers DVD 1