Gluttonous bacteria on the fast track compete with biofilm-makers boldly going where bacteria haven’t gone before.

Rapidly “evolving” bacteria are in the news. A mutation toggling the bacteria Pseudomonas aeruginosa between two distinct forms is generating excitement among evolutionary biologists. Joao Xavier of Memorial Sloan-Kettering Cancer Center and colleagues report in Cell Reports that they have repeatedly observed Pseudomonas evolve into “hyperswarmers.”

One of the greatest Achilles heels in evolutionary dogma is the fact that the wondrous production of life from lifelessness and the rise from molecules to man supposedly occurred while shrouded unobserved by the mists of millions of years. Evolutionary biologist Stephen Jay Gould once argued that man was an accidental product of countless unpredictable evolutionary accidents. Carl Zimmer of the New York Times now reports that evolution need not be so slow or so random.

Pseudomonas aeruginosa, like many microbes, can exist quite nicely in our environment and even on our skin without causing us any harm. But Pseudomonas can also be a dangerous pathogen, causing, for instance, dangerous infections of immune-compromised patients, burn victims, and patients with cystic fibrosis. 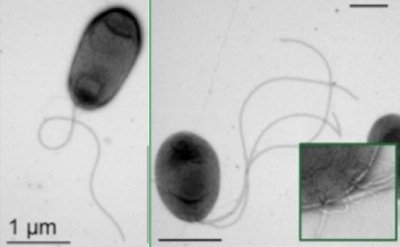 The Pseudomonas aeruginosa bacterium on the left has a single flagellum; it usually forms biofilms on surfaces. The Pseudomonas aeruginosa on the right is a product of selectively bred generations. Multiple flagella result from mutation in a regulatory tail-building gene. This hyperswarmer moves much more quickly than the bacterium with a single flagellum. Image by D. van Ditmarsch et al., via Cell Reports.1

Many bacteria—including Pseudomonas—can either anchor themselves to a surface as a biofilm or rapidly colonize a surface by swarming. Swarming involves a complex coordinated advance using flagella to move across a gooey bacteria-produced surfactant. Mediated by complex and incompletely understood regulatory means, biofilm formation and swarming are competing processes, and depending upon the circumstances one of the other may better enhance bacterial survival. Both sessile biofilm formation and swarming motility are related to pathogenicity and bacterial resistance to treatment. The ability to form a biofilm, for instance, enhances the devastating effect of Pseudomonas in the lungs of cystic fibrosis patients.

Pseudomonas aeruginosa typically has a flagellum but, like many swarmers, can develop multiple flagella as part of the swarming process. Joao Xavier’s team repeatedly selected swarming bacteria and placed them on food-rich petri dishes where they soon produced entire populations of hyperflagellated bacteria that swarmed rapidly through the available food supply. They discovered that the development of multiple functional flagella is the result of a single mutation.

These multi-tailed Pseudomonas hyperswarmers possess a single mutation in a gene designated FleN. FleN—flagellar synthesis regulator—codes for a regulatory protein that controls other tail-building genes. As bacterial generations developed an increasing number of flagella, the fast-swimming mutants were able to consume the readily available food supply and reproduce quickly, producing whole populations of fast, hyperflagellated “hyperswarmers.”

The original bacteria in Xavier’s experiment could form biofilms or swarm. By selecting swarmers and providing them with nutrient-rich conditions, the researchers developed populations of hyperswarmers, all possessing multiple flagella due to a mutation responsible for a protein that regulates tail-building. Image by Dave van Ditmarsch et al., via Cell Reports.2

When forced to compete with clones of their non-mutant ancestors, the ordinary biofilm-making Pseudomonas, however, the hyperswarmers couldn’t keep up. No matter how fast the hyperswarmers fed, they couldn’t out-survive and out-reproduce the biofilm-builders. “Although hyperswarmers outcompete the ancestral strain in swarming competitions, they are strongly outcompeted in biofilm formation, which is an essential trait for P. aeruginosa in environmental and clinical settings.”3 The biofilm evidently confers a survival advantage more important to Pseudomonas than the ability to eat fast.

Xavier suggests evolution is happening predictably, reliably, and repetitively in his laboratory. He says, “In this case, it could be that there are only a few solutions in the evolutionary space.” Xavier and his coauthors write, “Here, we show that repeated passaging of P. aeruginosa on swarming plates, leads to striking parallel molecular evolution.”4 They conclude, “Experimental evolution in swarming thus provides a unique example of parallel evolution and suggests the existence of an evolutionary trade-off between motility and biofilm formation.”5 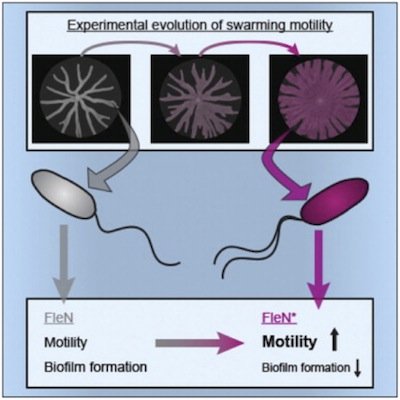 From a practical standpoint, the discovery of a single mutation that can turn off the ability of Pseudomonas to form biofilms may have significant clinical implications. As the authors recall, “P. aeruginosa is a well-known biofilm former, and its biofilms are notoriously difficult to eradicate by conventional antibiotic treatment. Biofilm formation is, therefore, being studied extensively in search of novel therapeutic approaches.”7

But does this discovery demonstrate any sort of molecules-to-man evolution? No, of course not. What is evident in Xavier’s lab is the same sort of selective process that occurs with the development of antibiotic resistance. Existing genetic information—in this case the ability to build flagella—is up-regulated by a mutation with resulting effects on the bacterial ability to swim fast. This enhanced motility robbed the bacteria of the ability to form biofilms and presented a survival disadvantage except under certain circumstances. But no new genetic information is evolving here, predictably or otherwise. The same information is simply expressed more or less strongly with predictable results. The discovery may well have therapeutic implications in the future, but readers should not see in this report any support for molecules-to-man evolution—slow or fast, observable or unobservable. These Pseudomonas mutants do not evolve into new more complex kinds of creatures when they grow extra flagella, swim fast, and out-eat their ancestors.

These Pseudomonas mutants do not evolve into new more complex kinds of creatures when they grow extra flagella, swim fast, and out-eat their ancestors.

Moreover, because both biofilm formation and swarming behavior exhibit a significant level of cooperation and coordination among bacteria, some evolutionists consider them to be modern models of how multicellular organisms could have evolved from single-celled ones. For instance, researchers who successfully developed populations of yeast forming snowflake-like clusters are credited with evolving multicellularity in a test tube. The percentage of fluffy yeast in the researchers’ yeast populations increased, but the researchers had only selectively bred the yeast that already formed clusters, taking advantage of genetic information already present. The ability of the yeast cells to coordinate their growth—like the ability of bacteria to regulate their swarms—is an ability that already exists and did not evolve in the laboratory. Therefore, nothing about this experiment supports the concept of evolving multicellular life from single cells, now or in the past.