The attack on this autistic child was the natural fruit of “pro-choice” and evolutionary worldviews.

A Canadian grandmother who helps look after her autistic grandson Maxwell has received a hateful letter demanding she “Do the right thing and move or euthanize him!!!” and advising “[T]hey should take whatever non retarded body parts he possesses and donate it [sic] to science. What . . . else good is he to anyone!!!!”1 The letter told Maxwell’s family that no woman would ever love him and no employer would ever hire him. The anonymous writer claims Maxwell’s “noise polluting whaling [sic] scares” her “normal children.” In short, the writer has judged that Maxwell is a worthless nuisance and therefore should be disposed of. 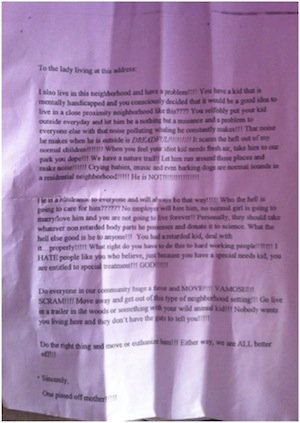 This letter was delivered to the grandmother of an autistic child in a residential Canadian neighborhood. Image from The Toronto Star.2

“Hateful,” but Not Hate

Because the letter bullies an individual family rather than trying to incite public hatred of all autistic people, the authorities say, “Despite the hateful language used, the Crown Attorney’s office has advised that the content of the letter falls below the threshold for a hate crime. However, there are other Criminal Code issues that are being considered.”3 Hate propaganda, according to the criminal code, would need to advocate genocide, incite public hatred, or willfully promote hatred. Lawyers commenting on the case say the letter could be construed as a threat, however, so it is still possible that the sender will be liable to criminal prosecution. Canadian law prohibits bullying in schools,4 but of course this letter was not delivered in that setting.

Needless to say, Maxwell’s mother, who has multiple sclerosis, and his grandmother were devastated. The Canadian community, alerted to the hateful letter, rallied in support of Maxwell and his family. Maxwell does not know about the letter. 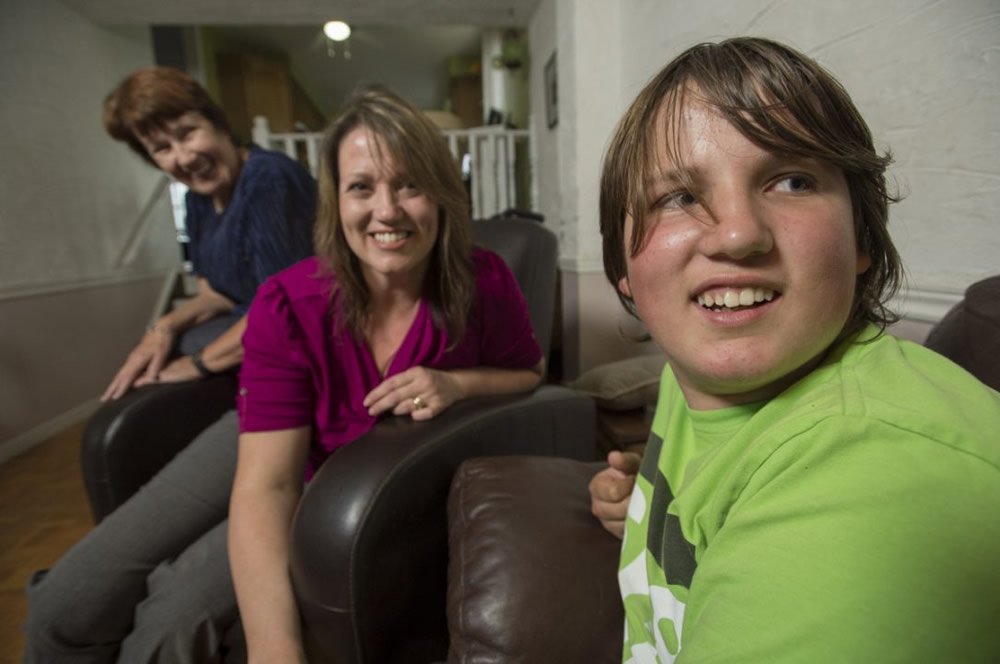 Maxwell Begley, 13, seen here with his mother and grandmother, has autism. An anonymous hate-filled letter to his grandmother declares his life to be a worthless and demands he not be allowed to live in society—or to live at all. Image by Rick Madonik/Toronto Star, via The Star.5

Thankfully, most people recognize that bullying the handicapped is revolting, or as one journalist writes: “the epitome of classless.”6 But we do not have to look far to see that this sort of socially unacceptable attitude is the outgrowth of many politically correct and socially acceptable standards.

The battle for the sanctity of life takes place in multiple arenas. Prolife groups battle to protect the unborn from harvest of their embryonic cells before their bodies are even formed. Biblically, we know that the Lord God recognizes these tiny victims as human beings, for the God-inspired Psalmist writes:

My frame was not hidden from You,
When I was made in secret,
And skillfully wrought in the lowest parts of the earth.
Your eyes saw my substance, being yet unformed.
And in Your book they all were written,
The days fashioned for me,
When as yet there were none of them. (Psalm 139:15–16)

The letter-writer voiced the popular view that retarded and handicapped children are a burden on society when she wrote: “You had a retarded kid, deal with it . . . properly !!!!!” One of those commenting on the Canadian News Service article about the letter summed up a great deal of truth in noting the letter-writer “is the inevitable product of a society that teaches people they have no inherent value but are just evolved pond scum, and that inconvenient children can and should be terminated, preferably while still preborn (for now). People who hold these false values will deny the connection of course; but this letter writer represents the direction that society as a whole is creeping in—thanks to people like them.”7

While autism is not a handicap that can be diagnosed prior to birth, countless babies are destroyed through “therapeutic abortion” before they take their first breath for the crime of having a diagnosable mental or physical handicap like Down’s syndrome or spina bifida. Euthanasia advocates continue to push their agenda8 worldwide, spouting a variety of euphemistic claims about mercy while expanding the way to eliminate a growing variety of inconvenient people. Belgium, for instance, has been much in the news in recent years as it pushes the frontiers of “mercy killing.” Belgium’s legalized assisted-death-toll, already rising, is sure to climb even higher as the “privilege” of opting-out of life gets extended to children and the demented. Incidentally, nearly a third of the “assisted deaths” in Belgium are not requested by those being euthanized.9

This hate-filled letter is the logical outgrowth of the culture of death—the culture that claims it is okay to simply get rid of problem-people.

What is going on here? Why in the 21st century are policy-makers in civilized free nations continuing to take pages from Herr Hitler’s book? Why do we as prolife Americans have to consider it a major victory when we are able to shave even a couple of weeks off of the legal age for abortion-on-demand? “Pro-choice” Planned Parenthood, promoting the murder of millions of inconvenient people, writes that “every child deserves to be wanted, loved and cared for”10—with the obvious corollary that the unwanted children should simply be killed. Why is the surest way to be denied the right to his or her first breath to be diagnosed with a physical or mental imperfection before birth? And why do we see the handicapped who manage to enter this world sometimes treated as if they would be better off dead? Thankfully, laws in free nations generally protect the rights of the handicapped, but the growing trend toward acceptance of euthanasia as a legitimate option for dealing with people that some consider inconvenient is concerning.

This hate-filled letter may seem an isolated incident, but it is the logical outgrowth of the culture of death—the culture that claims it is okay to simply get rid of problem-people. When legal options for abortion and euthanasia are offered as a way to escape problems, it should be no surprise to see letters like this appear. The hate-filled writer, sadly, is the expected fruit of our current culture of death.

So why should we protect the helpless, especially those who consume resources without “contributing” anything to society? Why should we protect the unborn and the handicapped and the many people targeted for euthanasia? Why are inconvenient people any different from inconvenient animals? After all, evolutionary dogma teaches that human beings are nothing more than highly evolved animals.

For Better or Worse?

But wait! Don’t many evolutionists tout the value of accepting evolutionary thinking for making the world a better place? Bill Nye assures the world that technological progress will grind to a halt if children fail to accept evolution. The Evolution Institute Workshop on Early Childhood Education provided by the PAXIS Institute actively promotes the evolutionary teaching from early childhood onward. They do so in order to provide “a conduit from the world of evolutionary science to the world of public policy for a diversity of issues vital to our welfare.”11 The Evolutionary Studies Program of New York’s Binghamton University advocates approaching “anything and everything from an evolutionary perspective.”12 After all, evolutionary psychologist Michael Price maintains that “evolutionary science provides the key to . . . moral progress.”13 Yet evolutionary thinking can provide only a relativistic man-made morality—the sort of morality that devalues imperfect babies and handicapped children.

A biblical perspective enables us to see how all the disease, physical and mental deficiencies, deterioration, deformities, and death that afflict us in this world are exactly what we would expect as a result of mankind’s rebellion against God. Handicaps are merely part of that broader spectrum. But a biblical perspective also reveals to us the sanctity of human life and the reason we should love and protect the handicapped as well as the infirm and the unborn.

God our Creator created the world we live in and all life in it. As our Creator, He is entitled to set the rules of morality, regardless of how man may twist definitions declaring when life begins and when it is not worth living. God created human beings in His own image, beginning with Adam and Eve, and designed them to reproduce after their kind. That same Creator sent Jesus Christ into this sin-cursed world as a human being to die for us all, thus demonstrating the great value He places on each human life. Christ loves every “one of the least of these” (Matthew 25:40). Therefore, we owe our love and support to all who are undervalued and demeaned, both those who thankfully still enjoy the protection of the law and those who—as legally disposable people—do not. Read more about the unexpected treasure to be found in handicapped children from an earthly father who wrote “God Glorified in Life and Death of a ‘Handicapped’ Child.”