Honeybees Navigate with a Map of Polarized Light

The uncanny ability of honeybees to remember and communicate the location of sweet nectar has been the subject of ongoing investigations—both navigational and genetic.

“The more we find out how honeybees make their way around the landscape, the more awed we feel at the elegant way they solve very complicated problems of navigation that would floor most people—and then communicate them to other bees,” says Professor Mandyam Srinivasan of the Queensland Brain Institute. 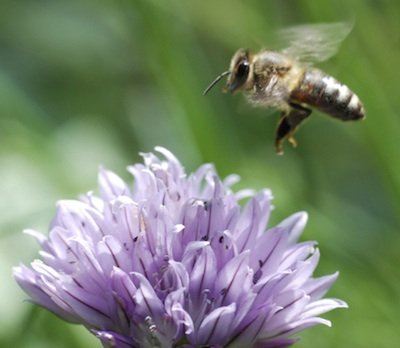 How do honeybee foragers explain to their fellow bees where to find the best nectar? Polarized light detectable even through the cloudiest sky seems to imprint a message on certain neurons in the bees’ tiny brain, activating a gene the bee shares with us in just those cells, in order to map the sky. Then they dance their message. Image public domain photo through Illinois.edu. 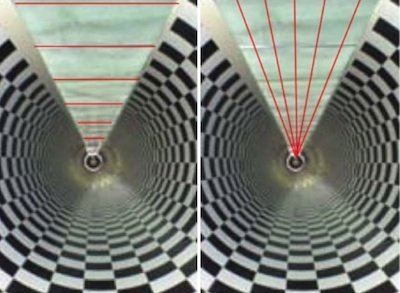 These images depict tunnels through which bees in the Queensland Brain Institute’s experiment flew as they foraged for a floral food source. The left, with transverse polarized light indicated by the red lines on the ceiling, is the pattern a bee would see while flying either directly toward or directly away from the sun. The right, with polarized light aligned with the tunnel, mimics the pattern a bee would see while flying in a direction whereby the sun is either 90 degrees to its right or left. Images by C. Evangelista et al., via Philosophical Transaction of The Royal Society B.1

A new study by Srinivasan’s team confirms that bees do look to the sky—even if the sun is obscured by clouds—to collect directional data from polarized light. Foraging bees pass these directions on to their fellow bees through a waggle dance.2

“It is well known that bees steer by the sun, adjusting their compass as it moves across the sky, and then convert that information into instructions for other bees by waggling their body to signal the direction of the honey,” he says. “It is also known that bees can find the honey source even on cloudy days when the sun isn't visible. Other laboratories have shown from studying their eyes that bees can see a pattern of polarised light in the sky even when the sun isn't shining: the big question was could they translate the navigational information it provides into their waggle dance.”

Mandyam Srinivasan’s study has not only confirmed that the bees do so but also revealed some amazing refinements, particularly considering they are executed by arthropods with brains the size of pinheads.

“It basically means the bees tell each other where the nectar is by converting their polarised ‘light map’ into dance movements, explains Srinivasan. Bees transmit their data for the best as-the-crow-flies route, even if they themselves were sidetracked and never flew the route themselves. They even deal efficiently with the directional ambiguity inherent in the use of polarized light.

The investigators suspect this high-tech data is recorded in the bees’ tiny brains through expression of the Egr gene, a gene that bees share with us. Evolutionists think this gene has been “conserved” through eons of evolution, but creation scientists recognize this remarkable bee-brain-ability as another example of the way the Creator of all things great and small3 has employed a common design in diverse ways.

The Vision Center investigators allowed bees to fly through a sun-blocked tunnel to a sugar source. The tunnel was illuminated only by polarized light that was either aligned with or perpendicular to the tunnel. Then they filmed the bees’ de-briefing upon their return to the hive.

“When the polarised light was in line with the tunnel, the bees danced in a horizontal direction with waggles to the left or right. This informed the other bees that they should fly along the direction of the polarised skylight. If the sun were visible, this would imply flying 90 degrees to the right or left of it.”

Of course, there remains a certain amount of ambiguity even in this message. Each message limits the direction to a very small slice of the 360 degree compass but still allows for either of two opposite directions. Since the instructions are delivered to a considerable workforce, the bees handle this ambiguity by splitting up: half go one way, and half go the other way.

How do they know if they’ve gone far enough and need to give up and return to base? The total as-the-crow-flies distance to target and return distance is also encoded in the dance message.

What would happen if there were more than just two possibilities in each message? Srinivasan’s team found out. They complicated the foragers’ route and thus presented the bees with four possibilities.

“When we shone polarised light that was across in the first part of the tunnel and in-line in the second part, we simulated for the bees an L-shaped journey in which they flew initially in a direction perpendicular to the sun (either to the left or to the right of it) and later along the direction of the sun (either towards or away from it)” explains Srinivasan. “This created the dilemma that the food source could be in one of four possible locations. The bees addressed this dilemma by informing their nest mates to search in all four possible directions.”

Thus, bees are quite able to seek out and share the sugary options available under the cloudiest of skies. The Queensland team writes, “We conclude that flying bees are capable of obtaining and signalling compass information that is derived purely from polarised light. Furthermore, they deal with the directional ambiguity that is inherent in polarized light by signalling all of the possible locations of the food source in their dances, thus maximising the chances of recruitment [of a bees] to it.”

How do the bees manage to record such complex navigational information? As the team writes, “Our results beg the question as to how ‘multiple’ solutions as to the location of the food source are computed and represented in the neural machinery of the brain.”4

The team suspects the key is a gene bees share with us. Last year the Institute for Genomic Biology at the University of Illinois reported that a gene known as Egr ( “early growth response protein 1”) is involved in the navigational activity of bees. Egr-1 is a regulatory gene. A homologous (corresponding) gene is expressed in the hippocampus of the mammalian brain as animals learn to deal with new situations. Researchers reported in the June 2013 issue of the Journal of Experimental Biology that a corresponding regulatory gene is activated in the mushroom bodies of bee brains only when they are learning their way around an unfamiliar place.5 Of course, this is exactly what a bee must do when looking for a new source of floral sugar.

Srinivasan’s team suspects that, as the foragers fly, the polarized light they see stimulates the expression of the Egr gene in little pairs of “place cells”6 in the mushroom bodies of their brains. Perhaps one pair of such neurons is activated when the light aligns with the tunnel, another if the light is oriented in a perpendicular direction, and so on in order to map the compass on a bee’s tiny brain. Then the bee can present all the applicable directional options to its comrades when it returns to the hive. The team notes that more work will be needed to confirm this idea, writing, “Whether this is indeed how the brain represents ambiguous locations remains to be explored.”7

The neuroscientist and entomologist who unraveled the Egr connection to bee navigational memory, Professor Gene Robinson, attributes the fact that similar genes are involved in both vertebrate and invertebrate learning to a source deep in evolutionary history. “This discovery gives us an important lead in figuring out how honey bees are able to navigate so well, with such a tiny brain,” Robinson says. “And finding that it’s Egr, with all that this gene is known to do in vertebrates, provides another demonstration that some of the molecular mechanisms underlying behavioral plasticity are deeply conserved in evolution.”8

Common designs do not imply that either common evolutionary ancestry buried deep in time or convergent evolutionary development must have been involved.

The puzzle of bee navigation is indeed a remarkable story that only becomes more amazing with each new discovery. We look forward to more research to confirm the neuroanatomical mapping mechanism at work in such a tiny brain. Yet nothing about the bees’ navigational data distribution strategy or the molecular basis of the bees’ brilliance demonstrates that it results from a mechanism “deeply conserved in evolution.”

Homologous genes—similar genes present in a variety of species—are an example of the common designs we would expect from a wise common Designer, our Creator, who did create all things great and small. Many genes have homologous corresponding versions present in the genomes of many animals and people. The existence of corresponding genes does not explain their origin. Similar genes, such as this regulatory gene, represent one of the many ways in which we see that God used similar designs—whether molecular or anatomic—in various ways throughout the biological world.

Common designs do not imply that either common evolutionary ancestry buried deep in time or convergent evolutionary development must have been involved. Common designs and similarities don’t demonstrate evolutionary relationships. Common designs—whether anatomical, behavioral, or genetic—are exactly what we would expect from a common Designer. Today’s engineers use common designs in engines to power various motorized vehicles. Today’s architects use common designs to produce an infinite variety of buildings for a myriad of uses. Today’s pharmacologists and chemists use common designs to create many useful medications and chemicals. Why should we expect any less wisdom from the ultimate common Designer, the Creator God of the Bible? According to His own eyewitness account in the Bible, God created all kinds of animals to reproduce and vary within their created kinds as described in Genesis 1 and 2. We see that pattern confirmed in the biological world, where no new kinds of creatures ever evolve.

Thus, as we enjoy the local honey many of us consume in hopes of combating seasonal allergies,9 we can sit in amazement at the intricacy and efficiency of the neurobiological navigation system that God, who tells us He created all things in just six days (Exodus 20:11), designed for the honeybee.

Previous Paper Fish Fins Are Not Fingers That Failed Next Article Did Humans Evolve from a Fish out of Water?