Is the Creation Good?

Only those who take Genesis as literal history can explain the condition of the world today.

Earthquakes, tsunamis, hurricanes, tornadoes, diseases, violence, and death—we see these catastrophes and tragedies each day on this earth. Surely no one would call a world like this “good.” In reality, Christians who compromise Genesis with millions of years have to justify describing all this as “very good.” In 2019, the website of BioLogos, the organization that actively tries to get churches and Christian institutions to believe in evolution and millions of years, stated,

We’re thrilled to announce the release of an important new book, Understanding Scientific Theories of Origins: Cosmology, Geology, and Biology in Christian Perspective. This book—a textbook—was written by five Wheaton College professors. [It is] the fruit of a 3-year grant they received from BioLogos in 2013.

Now the professors who wrote this book promote evolution and millions of years, such as by saying, “Although some Christians have argued that the fall utterly disrupted some kind of original perfection of creation, there is no evidence from either the Bible or the creation, making that a foregone conclusion.”

At Answers in Genesis and in the Ark Encounter and Creation Museum exhibits, we teach the opposite of this statement. AiG teaches that the fall utterly disrupted the original perfection, and we show directly from Scripture that we now live in a groaning world because of sin.

For the creation was subjected to futility, not willingly, but because of him who subjected it, in hope that the creation itself will be set free from its bondage to corruption and obtain the freedom of the glory of the children of God. For we know that the whole creation has been groaning together in the pains of childbirth until now. And not only the creation, but we ourselves, who have the firstfruits of the Spirit, groan inwardly as we wait eagerly for adoption as sons, the redemption of our bodies. (Romans 8:20–23)

So why do these Wheaton College professors claim the fall did not disrupt “some kind of original perfection of creation”? Well, to put it simply, because they believe in millions of years!

A Record of Death

In the 1700s and 1800s, atheists and deists wanted to explain the fossil record by natural processes to get rid of any explanation from the Bible, such as the global flood of Noah’s day. So they claimed the fossil layers over the earth were laid down millions of years before the existence of man. Now since that time, many people in the church have accepted these supposed millions of years to explain the fossil-bearing layers and tried to fit them into Scripture before humans (before the creation of Adam and the entrance of sin).

It’s important to understand that the fossil record with its billions of dead things is not just a record of death but a record of disease and violence. The fossil record holds numerous documented examples of diseases like cancer in bones, evidence of animals eating other animals, and fossil thorns—all supposedly millions of years old. However, the Bible teaches that before man sinned, the animals were vegetarian (Genesis 1:30), and thorns came after the curse (Genesis 3:18).

After creating everything, including the first two people (Adam and Eve), “God saw everything that he had made, and behold, it was very good” (Genesis 1:31).

One of the most-asked questions by the younger generations today is, “How can Christians believe in a loving God with all the death, disease, and suffering in the world?” Sadly, most of our church leaders have told these young people that’s how God created everything. Only those Christians who take Genesis as literal history, as it is meant to be taken, can explain that the world we live in today has been affected by sin. It’s a fallen, groaning world full of death. In fact, God describes death as an “enemy” (1 Corinthians 15:26).

In Acts 3:21 we read that one day in the future, all things will be restored. In other words, when God makes the new heavens and earth, it will be restored to be like it was before the fall. And how is this restoration described?

He will wipe away every tear from their eyes, and death shall be no more, neither shall there be mourning, nor crying, nor pain anymore, for the former things have passed away. (Revelation 21:4)

Ken Ham is the founder and CEO of Answers in Genesis–US. He has edited and authored many books about the authority of God’s Word and the impact of evolutionary thinking on our culture, including Gospel Reset and The Lie. 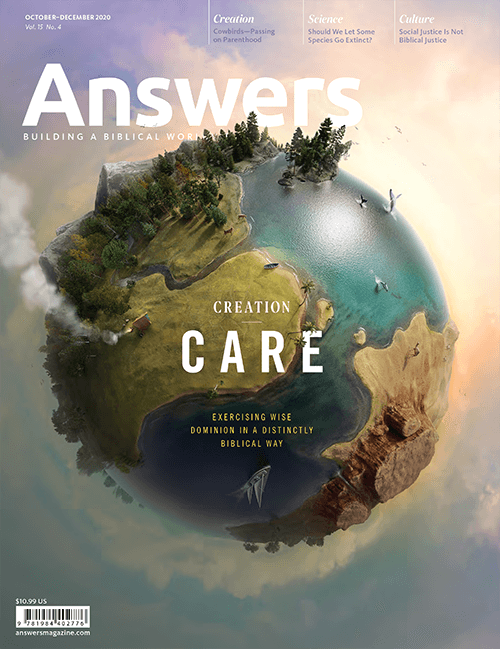