Virtual Particles, Time, . . . and the Trinity

Space, time, and matter are all examples of “three-in-ones” in nature. Perhaps God created them in this fashion to declare His own triune nature.

Many people don’t think about God creating empty space, but He did! Space is not “nothing”; it is something, just as much as clouds and trees are something. It had a beginning and was therefore created by God (John 1:3).

If space were really nothing, we would not be able to measure it. When I measure the volume of an “empty” room, I’m really measuring the amount of space within it. 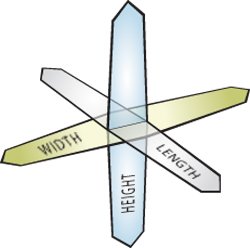 Space has properties. For example, it has three dimensions. This means that I can move through space in three independent ways (up and down, left and right, forward and backward). Any other movement is some combination of these three directions. Perhaps God made space three dimensional to remind us of His triune nature. God is three (in persons), and yet one (in nature). Similarly, space is three (in dimensions) and one (in nature).

God created time, too. Time had a beginning (Genesis 1:1), and therefore requires a Creator. Time has only one dimension, yet we perceive time in three divisions: past, present, and future. So time, like space, is a sort of three-in-one, and reminds us of God’s triune nature. Although we have freedom of movement in space, we can move only forward in time; we remember the past, experience the present, and anticipate the future. Since God alone is beyond time, only God can know the future. We can certainly make reasonable predictions about the future in some cases, but only God infallibly predicts specific future events. Isaiah 46:9–10 tells us that no one else is like God who alone declares the end from the beginning, and from ancient times the things which have not yet been done. 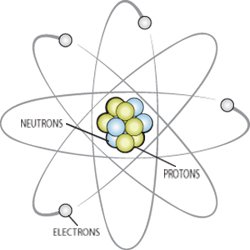 Even atomic particles speak of God’s triune nature. All atoms, except for hydrogen, are composed of protons, neutrons, and electrons.

Ordinary matter is comprised of atoms. Amazingly, atoms also have a three-in-one nature. They are comprised of three types of particles—protons, neutrons, and electrons (except hydrogen, which normally does not have neutrons). Protons and neutrons also are each comprised of three smaller particles called quarks. It is interesting that some people reject the trinity on principle, while simultaneously accepting the many three-in-one examples we see in nature. Perhaps this is one reason why God says, “. . . being understood by the things that are made, even his eternal power and Godhead; so that they are without excuse” (Romans 1:18–20).

The Bible records that, in the beginning (time), God created the heavens (space) and the earth (matter). So the universe itself is a three-in-one of sorts, thereby reflecting its Maker. The logical, orderly way the universe behaves is also a reflection of the One who made it and sustains it by the word of His power (Hebrews 1:3).