Image by Ajapzk, via Wikimedia Commons

Study: Ancient Tree with “Most Complicated” Growth Mechanism Ever

The basic evolutionary story is straightforward: life evolves from simple to complex. But the fossil record increasingly does not support this simplistic view of earth’s history. Complex organisms appear throughout the fossil record, often bursting onto the scene with no discernable ancestors in the rocks below. And a recent study of an ancient tree with a very complex and utterly unique growth pattern adds to this evolutionary puzzle.1

These now-extinct trees are called cladoxylopsids and are found in Devonian rock layers conventionally dated at 393–372 million years ago. Growing up to 39 feet (12 meters) tall, these trees sported a clump of branches at the top (a bit like a palm tree, although the branches stood upright). The base of this slim tree has a distinct bulbous shape. These trees are considered, in an evolutionary timeframe, to be the earliest trees.

These trees are considered, in an evolutionary timeframe, to be the earliest trees.

Most specimens that have been discovered were preserved in sand “offering only tantalising clues about their anatomy,”2 but fossils found in northwest China were buried by volcanic sediments. The glassy silica preserved the trees so well researchers could “observe every single cell of the plant.” This allowed them to make an astonishing discovery—cladoxylopsids don’t grow like other trees. 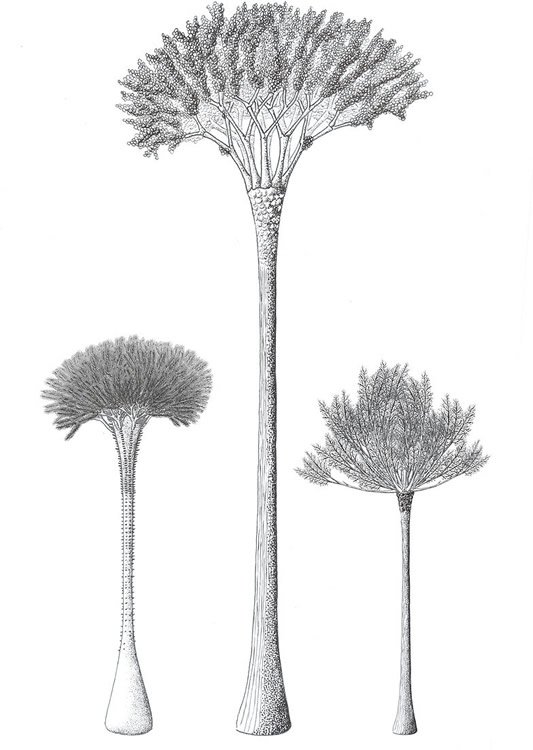 Artist’s reconstruction of various members of the order Pseudosporachnales with the class Cladoxylopsida. Image by Falconaumanni, via Wikimedia Commons.

A Tree That Grows by Ripping Its Skeleton Apart

Extant tree trunks are made of a single cylindrical shaft composed of hundreds of woody bundles called xylem. These conduct water from the roots throughout the tree, to the branches and leaves. New xylem grows in rings, giving trees the familiar ring pattern we see in a cross-section of a tree trunk. Not so with the cladoxylopsids.

These trees had multiple vertical xylem columns, connected by crisscrossing strands and separated by soft tissue, spaced around a hollow trunk. New growth formed in rings around these xylem columns and new soft tissue growth forced the columns to spread out from one another. This widened the trunk, allowing the tree to grow taller.

There is no other tree that I know of in the history of the Earth that has ever done anything as complicated as this. The tree simultaneously ripped its skeleton apart and collapsed under its own weight while staying alive and growing upwards and outwards to become the dominant plant of its day.

By studying these extremely rare fossils, we've gained an unprecedented insight into the anatomy of our earliest trees and the complex growth mechanisms that they employed.

This raises a provoking question: why are the very oldest trees the most complicated?3

Why Are the Oldest Trees the Most Complicated?

Dr. Berry’s question is a good one. Why are the oldest trees, in an evolutionary timeframe, the most complicated and unlike anything surviving today? Perhaps the answer lies in looking at these unique trees starting with a different worldview.

A biblical model of origins starts with God’s Word. The Bible teaches that God created plants, fully formed and functioning, on Day Three of Creation Week. We know from creation there is an incredible amount of variety within the plant kingdom from deciduous trees to conifers to trees that flower and grow fruit to trees that drop nuts to delicate grasses to sweet-smelling wildflowers. The variety in creation—just within this one kingdom—is astounding.

We don’t expect to find simpler life deeper in the fossil record. God is the author of all life, and life—no matter where it’s found—is more stunning and complex than we could have originally imagined. The growth structure of this tree is an incredible discovery and adds to our knowledge of the beauty and variety of God’s original creation, but it is hardly perplexing. It fits with a biblical worldview.

Buried During the Flood

This tree was buried by a catastrophe, likely a volcanic one, as a result of the global Flood of Noah’s Day. The rock layers are filled with volcanic sediments pointing toward massive volcanic activity as the floodwaters were rising (as well as post-Flood volcanic activity). These trees were buried in some of that silica, preserving them for us to observe today.

Cladoxylopsids weren’t the dominant tree of a past eon, gradually taken over by more modern tree species. They represent part of an ecosystem that did not survive the Flood or was unable to reestablish a viable population in the radically different post-Flood world. Sadly, these trees are just another example of a part of God’s original creation that is now lost.

This new discovery should cause us to stop and praise the one who, with infinite variety and creativity, has fashioned such an amazing world for us to live in. What a marvelous Creator we serve!