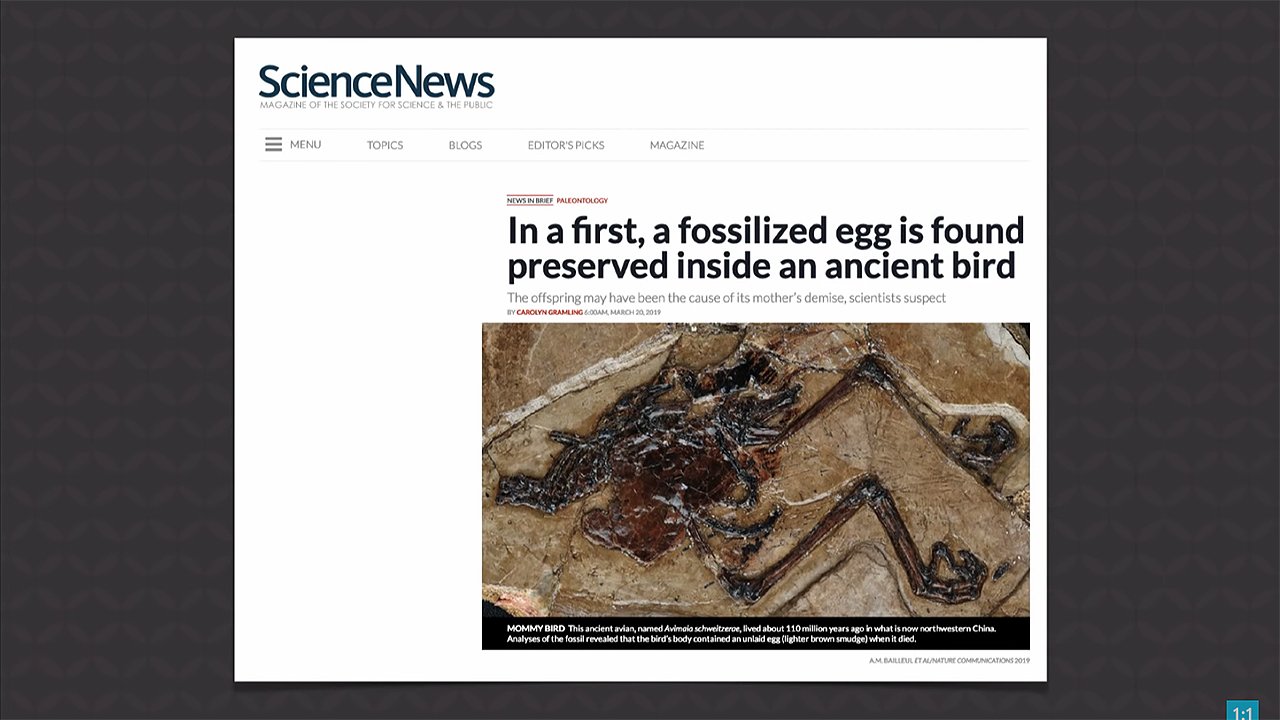 After examining a fossil left in a box in storage for ten years, scientists made a surprising discovery—this fossilized bird, found in lower Cretaceous sediment, was preserved with her unlaid egg still inside her. There was also evidence of medullary bone, “a calcium-bearing tissue that aids in eggshell formation.”1 This is strong support for the idea that so-called ancient birds (this one dated at a supposed 110 million years) created and laid eggs in a similar fashion to today’s birds.

The scientific paper on this find, published in Nature Communications, is unequivocally reporting on a true bird. The researchers know it’s a bird, and all the popular summaries of the research mention that it’s a bird. Yet the scientific paper refers to an evolutionary link that dinosaurs allegedly have with birds, from the beginning of the paper right through to the end, with phrases such as:

New information is making it increasingly clear that many soft-tissue and behavioral features associated with extant birds had their origins among the Dinosauria.

We discuss the implications of these findings in context of our understanding of dinosaur reproduction and the evolution of the specialized crown avian condition.

Evolutionists are so committed to their blind-faith belief that birds are dinosaurs because of a supposed shared evolutionary ancestry that a discussion of an actual bird laying a bird’s egg somehow tells us about dinosaur reproduction. This is a totally ridiculous leap!

The body was probably buried during the global flood of Noah’s time—and perhaps the stress that caused the egg binding was the rising floodwaters that eventually buried her.

The discovery also points to rapid burial. This bird died, possibly because of an often-fatal condition usually caused by extreme stress, known as “egg binding” (the egg inside this bird was malformed), and was quickly buried before scavengers or microbes could break the bird down. The body was probably buried during the global flood of Noah’s time—and perhaps the stress that caused the egg binding was the rising floodwaters that eventually buried her.

This item was discussed today on Answers News with cohosts Dr. Gabriela Haynes, Bodie Hodge, and guest Dr. Tommy Mitchell. Answers News is our twice-weekly news program filmed live before a studio audience here at the Creation Museum and broadcast on my Facebook page and the Answers in Genesis Facebook page. We also covered the following topics:

Watch the entire episode of Answers News for March 28, 2019.