Is the Dawn of the Early Bird Too Good To Be True?

Feathers are ruffled in the evolutionary community because the newest candidate for the world’s first bird upsets the currently popular claim that Archaeopteryx was not a bird at all.

Feathers are ruffled in the evolutionary community because the newest candidate for the world’s first bird upsets the currently popular claim that Archaeopteryx was not a bird at all. Pascal Godefroit and colleagues can only achieve bird-status for their non-feathered fossil if the slightly “younger” and clearly feathered Archaeopteryx can be called a bird. While evolutionists worldwide argue over just how the evolutionary history of birds should be adjusted this time, some seek to snatch victory from the jaws of inconsistencies by proclaiming that the fuzziness of dinosaur-bird definitions actually proves that birds evolved from dinosaurs.

The conundrum concerns the chicken-sized Aurornis xui. Aurornis is said to have originated in Liaoning province's Tiaojishan Formation. Aurornis was found by a farmer, acquired by a fossil dealer, and sold to Yizhou Fossil & Geology Park. Since the scandalous appearance of the Chinese “Archaeoraptor,” a forged feathered fossil that National Geographic in their November 1999 magazine hailed as the dinosaur-bird “missing link,” paleontologists analyzing fossils obtained from Chinese farmers and fossil dealers often include in their papers a statement declaring faith in their fossil’s authenticity. The article in Nature concerning Aurornis—whose Latin name means “dawn-bird”—contains just such a statement of authenticity in its supplementary materials. Nevertheless, the fossil is so perfect that some have suggested that Aurornis is a forgery.

“I would take a skeptical look at this specimen,” evolutionary paleontologist Luis Chiappe of the Natural History Museum of Los Angeles County says. “The fact that it is so neatly arranged and so complete makes it suspicious.” The researchers base their belief in Aurornis’s authenticity on the fact that its shale slab looks like the sort of shale encasing Liaoning’s feathered Anchiornis. They could not detect “any trace of forgery”1 and therefore write, “The probability that the specimen is a composite is accordingly low.”2 Godefroit, of the Royal Belgian Institute of Natural Sciences and lead author of the report in Nature, is offended that anyone would question the authenticity of feathered fossils or the appropriateness of re-drawing the evolutionary history of birds on the basis of such fossils of uncertain origin. He says, “If farmers did not start collecting specimens in Liaoning, nothing would be known about feathered dinosaurs and bird evolution in China.”3 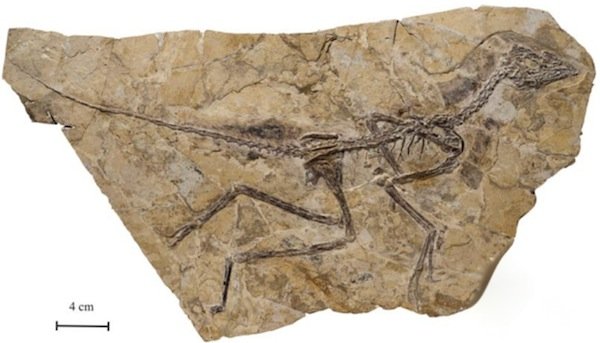 Aurornis xui is a well-preserved fossil that reportedly came from 160 million year old rock in China’s Tiaojishan Formation. Pascal Godefroit and colleagues believe it represents the earliest member of Avialae, the branch of dinosaurs from which evolutionists believe birds directly evolved. Joining Aurornis on this bird branch, however, is Archaeopteryx, an assertion which is ruffling many feathers among evolutionary pundits. Image by Pascal Godefroit et al., via Nature.4

The real irony of this drama is that the Aurornis fossil doesn’t have any feathers, at least none that even the mass media is ready to exult over, in spite of the glorious plumage painted onto the artistic reconstruction that is making the rounds (see illustration, right). For example, ScienceNews reports, “There isn’t any well-preserved plumage on the new specimen, but Godefroit says that the shapes of bones in the fossil’s pelvic region are part of what make him think the animal was a bird.”5

Although the “best” feathers the authors can report are only “traces of plumulaceous feathers,”6 Chiappe doubts Aurornis is a real bird for other reasons: the forelimb is too short for a bird, the tail is reptilian, and the skull has features more consistent with a dinosaur. He says, “This is very birdlike, but it is not yet a bird.”7

The problem, from the evolutionary point of view, is that the dinosaur-bird ancestral tree got re-drawn in the last few years, largely on the basis of Chinese paleontologist Xing Xu’s work with so-called feathered dinosaurs. Xu is troubled that Godefroit’s study bumps several “feathered dinosaurs” back into the “bird” category, commenting, “Their analysis also produced several results inconsistent with those of most recent studies. I don't consider this piece of work as a final solution.”

Despite its obvious feathers and its classification for 150 years as an extinct bird, the creature’s “birdiness” has remained in dispute.

Following the discovery of the truly feathered Anchiornis and the apparently featherless Xiaotingia, Archaeopteryx was not only supplanted as the “first bird” in the evolutionary saga but even bumped off the bird list. Archaeopteryx was removed from the Avialae branch of the phylogenetic tree, the branch of dinosaurs that evolutionists believe directly gave rise to birds. Despite its obvious feathers and its classification for 150 years as an extinct bird, the creature’s “birdiness” has remained in dispute.

The analysis of Aurornis compares nearly a thousand skeletal details with those of other fossils, especially Archaeopteryx and Anchiornis—fossils that clearly have pennaceous feathers. Beginning with the assumption that an evolutionary progression must exist, subtle similarities in many minor bony details achieve evolutionary significance through the magic of statistics. Therefore, despite the reptilian tail, dinosaurian skull, and short forelimb noted by Chiappe, Aurornis emerges as a bird. And because the Tiaojishan Formation from which Aurornis is supposed to have originated is conventionally dated around 160 million years old,8 Aurornis not only seizes the brass ring of “earliest bird” but also restores the German Archaeopteryx (dated at about 150 million years) to the avian succession. Godefroit places Aurornis, Anchiornis (also from the Tiaojishan Formation and dated at 150–160 million years but considerably more bird-like, having real feathers), and Archaeopteryx all in the basal evolutionary bird slot, Avialae. He says, “This new comprehensive phylogeny, or evolutionary development, shows that point of origin avialans were already diversified in northern China during the Middle-Late Jurassic.”9 Coauthor Andrea Cau explains that Aurornis is “among the earliest birds, being it’s both older and apparently less ‘bird-like’ than Archaeopteryx along the ‘bird branch.’”

It is this lack of bird-characteristics that troubles Aurornis’s bid for the early bird title. Evolutionists interpret this non-birdiness as proof the creature is very primitive. Therefore, Godefroit’s team can only classify the fossil as a bird if they can show it shares the characteristics of an extinct but more highly evolved bird. And that is why Archaeopteryx must be a bird for this early bird claim to hold water.

Some evolutionists consider this primitive problem to be not so much a problem as proof of evolutionary relationships. Chiappe says,

The problem we are facing these days is that all these animals are anatomically very similar, and our definition of birds—arbitrary as it is—sets a line between what is and what isn't called a bird. [emphasis ours] . . . What the [evolutionary phylogenetic] trees—and the new fossils—are telling us is that back in the Jurassic, 150 to 160 million years ago, many different types of dinosaurs were experimenting with ‘birdness.’ And it is from this ‘birdness soup’ that true birds originated.

Evolutionary author Brian Switek says the frustrating and confusing problem of dino-bird classification has made a positive contribution to paleontology by leaving “no doubt that birds are dinosaurs.” In essence, the hypothetical common evolutionary ancestor of dinosaurs and birds would need to have characteristics present in all its presumed descendants. Thus the fuzzy distinctions between the shifting definitions of “bird” and “dinosaur” become an advantage for evolutionists seeking to invent or identify a common ancestor. 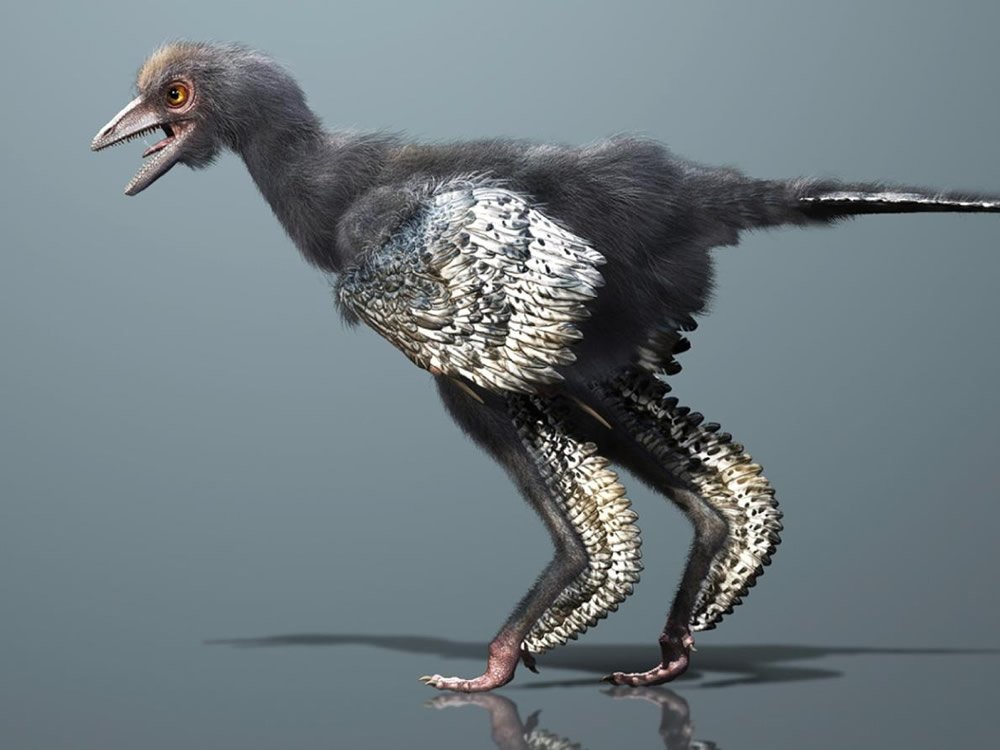 This artististic reconstruction of Aurornis xui contains more art than science. The actual fossil, though well-preserved, has no pennaceous feathers at all and only slight traces of bundles of filaments that evolutionists claim are plumaceous feathers. Image by Masato Hattori, via National Geographic.10

A few months ago we received a lot of criticism for saying that the feathered Eosinopteryx was not a dinosaur but a flightless bird. Now Godefroit’s team is reaping criticism for asserting that feathered fossils like Archaeopteryx and Anchiornis are birds. The common thread here, ironically, seems to be that calling an extinct creature with real feathers a bird is a sure path to derision.

So why can’t a feathered animal be a bird? And why must indistinct non-feathery filaments on some dinosaur fossils be defined as “protofeathers”? The public, which is being re-educated to ignore the obvious distinctions between birds and dinosaurs, may ultimately accept the notion that birds evolved from dinosaurs. Furthermore, evolutionists, unable to produce actual transitional forms, can create them by simply redefining classification categories to reflect evolutionary presuppositions, blurring previously straightforward distinctions.

God created all kinds of birds on the fifth day of Creation Week about 6,000 years ago, and He created the land animals including dinosaurs the next day. He said that He created them to reproduce after their kinds. Biologically, animals do just that, varying within their created kinds. Saying that obviously feathered animals are not birds because doing so upsets evolutionary beliefs does not make those evolutionary beliefs true or prove biblical history untrue.

We don’t claim, on the basis of the material published so far, to know what kind of animal the Aurornis was. Apparently neither do world-renowned evolutionary paleontologists, some of whom are so upset by the claims made about this well-preserved fossil that they suspect foul play in its provenance. One thing is certain, however: paleontologists have tinkered with the meanings of common words so much to make them match their evolutionary presuppositions that simple words like dinosaur and bird and even feather are practically devoid of meaning.