This fossil of a baby dinosaur dubbed Sciurumimus albersdoerferi is getting a lot of attention thanks to an article published July 2 in Proceedings of the National Academy of Sciences. When examined with ultraviolet light, the fossil, dug from a quarry in Bavaria, Germany, appears to have patches of skin with very fine, non-branching filaments. Coauthor Mark Norell says:

(See “Dinosaur-Bird Confusion” for a discussion of the reclassification of Archaeopteryx, an extinct bird, as a “feathered dinosaur.”) 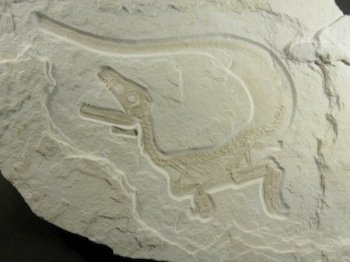 Sciurumimus, a theropod fossil from Bavaria, has patches of tiny unbranched filaments visible under ultraviolet light. The largest are about 0.2 mm thick (this is around the minimum size that the human eye can discern—thinner filaments would need to be magnified to be seen!). They are just like filaments found in other dinosaur fossils. Image credit Helmut Tischlinger, through www.nature.com.

According to lead author Oliver Rauhut, the filaments, which are no more than 0.2 mm thick, 3 are “very similar” to those found on a number of other dinosaurs. Even though they do not bear any resemblance to actual feathers, evolutionists call such filaments “protofeathers,” a name reflecting the evolutionary belief that they represent an early stage in feather evolution.

So if these “protofeathers” are just like other known “protofeathers,” why the big headlines? What makes the find “surprising”? Well, the authors believe this dinosaur belongs to a dinosaur category not previously known to possess them—megalosauroids.

Evolutionists assert that most of the known “feathered dinosaurs” are coelurosaurs, a diverse group of theropods in which they now include T. rex and birds. Filamentous “protofeathers” have also been found in another group, the ornithischians. (Ornithischians are dinosaurs that—unlike saurischian dinosaurs classed with birds—actually have hip bones constructed somewhat like bird hips; however, evolutionists do not consider the ornithischian group, with its many unusual members, ancestral to birds.) Although the authors describe some difficulty determining this juvenile fossil’s place in the evolutionary phylogenetic tree, they ultimately classified it as a megalosauroid theropod.4

Evolutionists consider megalosauroids to be “a group of archaic sharp-toothed dinosaurs near the base of the theropod family tree.” Therefore, these researchers write:

If one assumes homology between the protofeathers found in coelurosaurs and these ornithischians, the Sciurumimus specimen helps bridge the considerable gap between both filamentous integument structures.5

Note that the authors are not claiming the filaments are transitional structures between filaments and bona fide feathers. Instead, they are saying that Sciurumimus is in a dinosaur category they believe to be more primitive than other known feathered dinosaurs—or as Rauhut says, “much more basal within the dinosaur family tree.”7 Their “considerable gap” is the lack of an ancestral connection between dinosaurs which evolutionists think are ancestral to birds and those which they believe are not, since members of both groups have been found with filaments of some sort associated with their skin.

These structures are identical to the type 1 feathers that have been reported in some ornithischians, the basal tyrannosaur Dilong, the basal therizinosauroid Beipiaosaurus, and, probably, in the basal coelurosaur Sinosauropteryx.9

Despite such assertions, however, these so-called “feathers” bear no resemblance to the size or intricate structure of what we know as a feather.

Despite such assertions, however, these so-called “feathers” bear no resemblance to the size or intricate structure of what we know as a feather. Such “dino-fuzz” (like that on the Sinosauropteryx mentioned above) is even deemed by some evolutionists to be consistent with collagen fibrils,10 considerably different from the keratin of which feathers are composed. But whether these filaments were made of collagen, keratin, or some other substance, whether they were originally connective tissue within the dermis or some sort of filamentous skin appendages, the point is they are not the evolutionary ancestors of feathers. They exist as the miniscule filamentous remnants of something in or on the skin of some dinosaurs, and nothing about them demonstrates evolutionary progression to genuine feathers.

Evolutionists have been unable to document evolutionary progression in feather morphology over time, despite their insistence that filaments like these were the evolutionary prototypes of actual feathers.11 Sciurumimus has the same simple filaments we’ve heard about before. None of the complex anatomy seen in feathers nor even any feather follicles have been found. The authors point to “vertical skin structures that might represent follicles,”12 and in their journal article they sketch an “interpretative drawing showing possible follicles”13 (emphases ours), but they actually found none.

And why do the authors think these unidentified skin structures “might represent follicles”? They explain, “The only comparable structures in the avian skin are the follicles associated with the feathers, so we tentatively suggest that these structures might represent follicles.”14 In other words, birds have follicles, and because these evolutionists are sure that birds evolved from dinosaurs, these must be follicles. The authors even describe their findings as “filamentous plumage.”15 But as anatomist Dr. David Menton, who details the incredible design of actual feathers in his DVD Formed to Fly, comments, “Filaments are not feathers. But evolutionists want to see feathers, so they see feathers.” 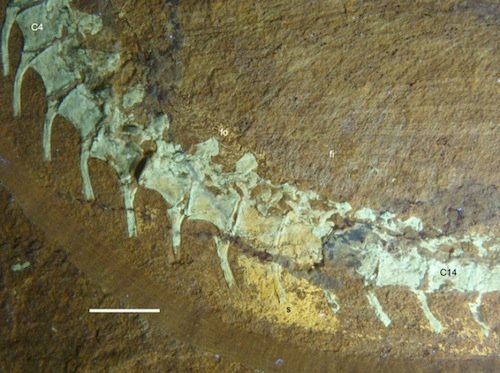 Under ultraviolet light the bone (labeled “C”) and filaments (labeled “fi”) look green. Skin is labeled “s.” The authors have labeled what they call “possible follicles” with “fo.” (scale bar = 10 mm) Image and information from www.pnas.org. 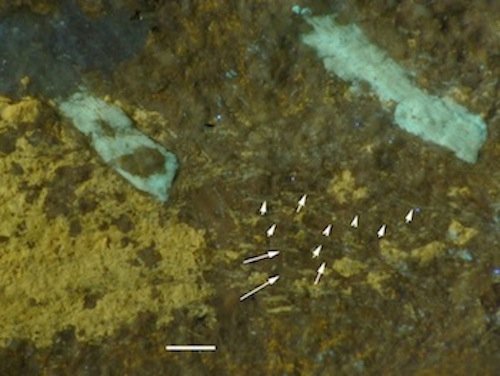 Excitement over this new dinosaur discovery rests entirely on the evolutionary assumption that dinosaurs evolved into birds. The impossibility of acquiring genetic information to produce feathers is only one of many problems with this supposed transition. God’s eyewitness account records that God created birds on the fifth day of Creation Week, just one day before He created the land animals, including dinosaurs. And He did it all about 6,000 years ago, making all the kinds of creatures fully equipped with everything needed to thrive and reproduce after their kinds.