Flying out China’s seemingly endless supply of so-called “feathered dinosaurs” is the latest superlative—or rather the most diminutive—addition to the growing collection: the Eosinopteryx brevipenna. This big name for the smallest member of the illustrious group literally means “red-winged and short-feathered.” The animal was nearly a foot long (30 centimeters), roughly 8 inches shorter than the Late Jurassic Archaeopteryx.1 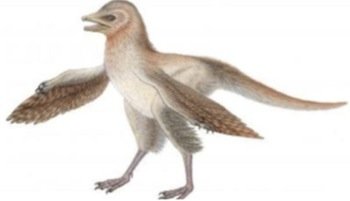 This artist’s conception of Eosinopteryx brevipenna shows actual feathers present on the animal’s legs. Nevertheless, evolutionary researchers classify this animal, along with the house sparrows and Archaeopteryx, as dinosaurs. Image courtesy of IRSNB-KBIN/P. Golinvaux through NBC News.

The fossil, purchased from a dealer, was from the Tiaojishan Formation of Liaoning Province, the source of many fossils reported to be “feathered dinosaurs.” The authors of the analysis in Nature Communications write that they consider the likelihood of forgery “low,” and note that fossils from the area are difficult to date due to complicated stratigraphic patterns. They believe the fossil came from a region estimated to be Middle to Late Jurassic, conventionally dated between 165 +/- 1.2 and 153 +/- 2 million years old.2 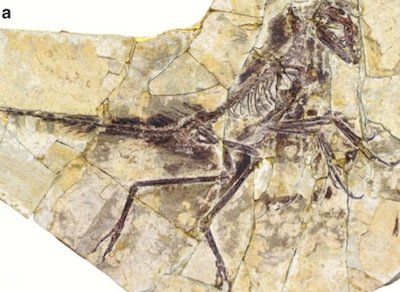 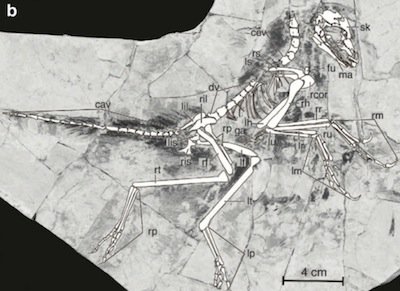 This is a photograph and line drawing of Eosinopteryx brevipenna. Researchers note that its bony structure is very similar to that of Anchiornis, a feathered fossil described in 2009. This fossil, however, appears to have the forelimb bones (radius and ulna: rr, ru, lr, and lu) aligned in a way that would make flapping difficult. Pennaceous feathers are found on this fossil’s forelimbs and upper hind limbs. Image courtesy of P. Godefroit et al., “Reduced plumage and flight ability of a new Jurassic paravian theropod from China,” Nature Communications (2013) doi:10.1038/ncomms2389 published online 22 January 2013. 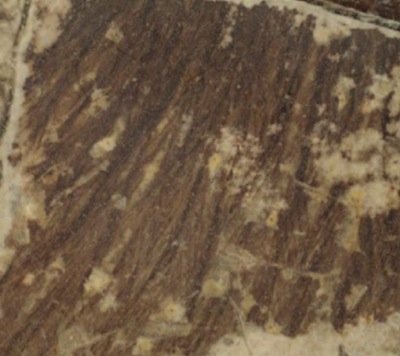 This is a close-up of a pennaceous feather from Eosinopteryx’s wing. The feather’s shaft is visible in the upper right corner and the barbs below. Image credit: P. Godefroit et al., “Reduced plumage and flight ability of a new Jurassic paravian theropod from China,” Nature Communications (2013) doi:10.1038/ncomms2389 published online 22 January 2013. 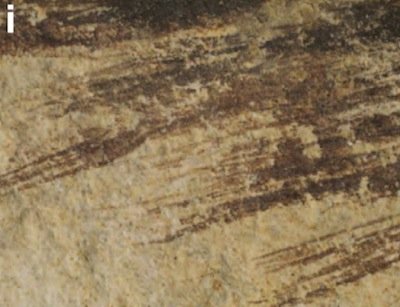 This is a close-up of what is thought to be downy feathery tufts from the tail of Eosinopteryx. Image credit: P. Godefroit et al., “Reduced plumage and flight ability of a new Jurassic paravian theropod from China,” Nature Communications (2013) doi:10.1038/ncomms2389 published online 22 January 2013.

Eosinopteryx brevipenna resembled Anchiornis in its bone structure, the researchers write. Also, they report Eosinopteryx had actual pennaceous feathers on its wings and upper hindlegs. Unlike Anchiornis, the leg feathers did not extend to its feet. Eosinopteryx also had a proportionately shorter tail and lacked pennaceous tail feathers, though the researchers suspect it had downy ones.3 They classify Eosinopteryx as a “sister taxon” to Anchiornis although they say it has comparatively less plumage and a shorter wingspan. Recent research has suggested that the feathers of both Anchiornis and Archaeopteryx were arranged in asymmetrical layers that would have made flight aerodynamically possible by allowing the birds to generate lift.4 Eosinopteryx, however, likely could not get off the ground.

Though the wing feathers were one-and-a-half times as long as the humerus (upper limb bone), the researchers believe the anatomy of its wing bones would have virtually precluded effective flapping. The authors write, “With a shorter humerus and manus [compared to the Anchiornis] and a reduced plumage, Eosinopteryx had a much shorter wing span than other feathered paravians including Archaeopteryx, Wellnhoferia and Anchiornis. The straight and closely aligned ulna-radius of Eosinopteryx also means that pronation/supination of the manus with respect to the upper arm would have been limited; combined with the absence of a bony sternum and weakly developed proximal humerus, these attributes suggest the Eosinopteryx had little or no ability to oscillate the arms to produce a wing beat.”5

I imagine it running around and jumping around from tree trunk to tree trunk, maybe using its wings to speed up its running.

The authors suspect Eosinopteryx was a better runner than Anchiornis, however. The foot feathers and curved claws of Anchiornis may have interfered with its efforts to run. “However, with reduced plumage and short uncurved pedal claws,” they write, “Eosinopteryx would have been able to run unimpeded.”6 “It's such a well preserved complete skeleton of a small dinosaur,” coauthor Gareth Dyke explains. “It would have lived in a forested, swampy environment. I imagine it running around and jumping around from tree trunk to tree trunk, maybe using its wings to speed up its running.”

The fact that this animal, then, had real feathers but was adapted for only ground locomotion prompts evolutionary thinkers to ascribe the survival advantage of feathered wings to be insulation or mate attraction. The authors indicate the apparent biodiversity of feathered animals in the Middle/Late Jurassic means the feathers had to have evolved much earlier. Dyke says, “This discovery sheds further doubt on the theory that the famous fossil Archaeopteryx - or ‘first bird’ as it is sometimes referred to - was pivotal in the evolution of modern birds. Our findings suggest that the origin of flight was much more complex than previously thought.”

As we evaluate the reported findings and sort facts from the conjecture, we should point out that the “collection of so-called feathered dinosaurs” to which we refer here is a very diverse group. This group typically includes dinosaur fossils with “dinofuzz” but no actual feathers as well as some birds with genuine feathers, such as Microraptor. Anchiornis has actual pennaceous feathers, as seen in published photographs,7 and is an example of the latter—a bird. Anchiornis also appears to have had feathers like those of the extinct toothed bird Archaeopteryx on its legs and feet. Thus, with actual pennaceous (anatomically mature modern feathers), Eosinopteryx brevipenna is also a bird, not a tiny dinosaur.

But why, then, does the report in Nature Communications indicate the animal is a dinosaur? When we examine the method used in the analysis, we find researchers used a computer program to compare the anatomical features of a number of “dinosaurs,” specifically theropods. According to this data analysis, Eosinopteryx brevipenna fit these dinosaur criteria and emerged as sister to Anchiornis.

The animals whose anatomical measurements were included in the category of “dinosaurs,” however, included Archaeopteryx (an extinct bird whose controversial re-classification as a dinosaur we discussed in “Dinosaur-Bird Confusion”) and even the ordinary house sparrow.8 Is it any wonder, then, that evolutionists considered this feathered animal to be a dinosaur? By these criteria, dinosaurs are tweeting in your backyard.

Yet classification systems such as these are man-made and, in this case, based on evolutionary assumptions. Biological classifications were originally based on common characteristics, but evolutionists prefer classification systems based on common ancestry and therefore now generally insist on considering birds to be highly evolved dinosaurs. Nevertheless, there are a host of insurmountable problems in the evolutionary dinosaur-to-bird scenario. Respiratory systems, body aerodynamics, finger embryology, and the complexities of the feather compared to scales present issues of irreducible complexities for the evolutionary paradigm.

The fossil record does not reveal an evolutionary progression in feather development, nor does it reveal transitional animals that are part bird and part dinosaur. The order of fossils in the fossil record is largely a record of the order various creatures were buried when their habitats were overcome by the rising waters of the biblical global Flood. This happened in the space of a few weeks, not millions of years. The presumed millions of years are based on unverifiable assumptions. Thus the fossil record does not demonstrate that birds evolved from dinosaurs, just as in the history of biology, no scientific observations have ever shown a way that dinosaurs could acquire the genetic information to make the dramatic changes that would have been necessary to evolve into birds.

Previous Article Looking for Water in all the Right Places Next Article Homo erectus Grew Teeth Like Modern Humans, Not Like Chimps