If like millions of other people you find that caffeine in your coffee, tea, or cola seems to improve your day, you’re not alone.

Now we know why caffeine exists! Scientists trying to determine the explanation for caffeine’s existence have discovered that it gives bees a buzz and boosts their memory too. 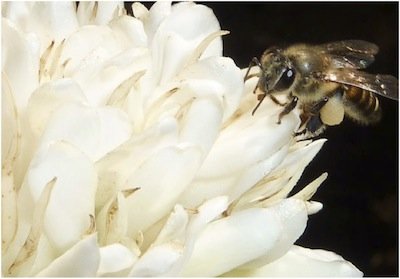 Low concentrations of caffeine in the nectar of this coffee flower enhance the honeybee’s memory. Image credit: Geraldine Wright, AAAS/Science through news.nationalgeographic.com 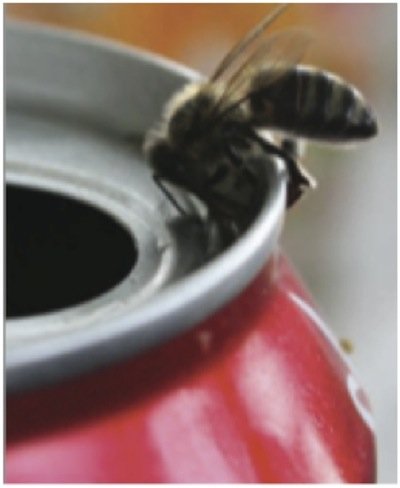 Do bees go after discarded cola cans just to get the sweets or is it the caffeine? A new study suggests caffeine enhances bees’ memory of where they got their buzz. Image credit: Aziz Almutairi/ University of Massachusetts, in “Caffeine Boosts Bees' Memories” Lars Chittka and Fei Peng, Science 339, no. 1157 (2013); doi: 10.1126/science.1234411

Caffeine, like nicotine, at high doses is bitter, toxic, and lethal, so scientists believe these botanical products help protect the plants that produce them from herbivorous predators. But at lower, more pharmacological doses the effects of caffeine are quite different. Caffeine occurs in low doses in the nectar and pollen of Coffea and Citrus plants. Could this caffeine offer some ecological advantage to the plants, other than poisoning animals that munch on them?

If caffeine offers the plants that make it a reproductive advantage, the answers might lie in the plants’ pollinators—bees.

If caffeine offers the plants that make it a reproductive advantage, the answers might lie in the plants’ pollinators—bees. Geraldine Wright of England’s Newcastle University and her team confirmed that caffeine is indeed present in nectar and pollen at low concentrations. The amount of caffeine varies but is unrelated to the amount of sugar in the nectar. The coffee plant produces a great deal of caffeine, and its nectar has a concentration comparable to a cup of coffee.1

Wright fed small amounts of caffeine to some bees and trained them to associate it with various scented sources of sugar. While the caffeine had minimal effect on how fast the bees learned their lessons, “it had a profound effect on long-term memory.”2 In fact, the caffeine was far more effective than just sugar at helping the bees remember even 72 hours later just which smells had provided the best buzz.3

The mushroom bodies in the bee brain integrate sensory input to form memories. Sensory information includes smells detected by the antennae (indicated by colored dots on the antennae, corresponding lobes in the brain’s antennal lobes, and the colored neurons) and sweet tastes detected by mouthparts (indicated by the black neurons.) Caffeine stimulates the activity of the Kenyon cells that integrate these sensory inputs in the mushroom bodies. This presumably cements the memory more firmly in the bee brain. Image credit: Axel Brockmann/NCBS Bangalore in “Caffeine Boosts Bees' Memories” Lars Chittka and Fei Peng, Science 339, no. 1157 (2013); doi: 10.1126/science.1234411

Wright’s team trained each bee to remember a scent by conditioning it to stick out its proboscis for sugar in response to certain odors. Those bees that got a caffeine reward with their sugar remembered the scents better, as indicated by proboscis extension when offered the right scent. Twenty-four hours after the training, the scent-memory of caffeine-baited bees was three times better than controls, and at 72 hours the caffeinated bees still had double the performance of their caffeine-deprived companions.

“We show that caffeine—a compound whose ecological role is mainly to deter and poison herbivores—actually acts like a drug in an ecologically relevant context,” Wright says. “The plant is secretly drugging the pollinator. It may help the bee, but the plant cares more about having a pollinator with high fidelity!”

Caffeine did not improve the bees’ sense of smell but rather their memories. Insect brains have certain cells in their “mushroom bodies” that enable them to lay down memories by integrating sensory input. Caffeine made those cells respond more strongly to smells, thus strengthening the memory process.

The effects of caffeine on humans is much more difficult to nail down. In mammals, caffeine is a “cognitive enhancer.”4 Caffeine inhibits adenosine receptors in a certain part of the brain’s hippocampus, making it easier to establish long-term memories. Do we humans consume caffeine because it helps us or just because we like it? Hard to say, but we probably remember how it makes us feel! As Wright says, “I think there is overwhelming evidence that we return again and again to consume caffeine because of the way we feel after drinking it.”

The bees rejected high concentrations of caffeine, and high doses of caffeine taste bitter to mammals. It appears that the concentration of caffeine in plant nectar is below the bitter tasting “threshold” for bees. Thus bees would most likely prefer to visit plants with a little buzz in their nectar, but not those that have too much. Through pharmacologically manipulating bees’ behavior, therefore, those plants offering just the right balance of caffeine are likely to attract bees and have greater long-term reproductive success. As Wright writes, “By affecting a pollinator’s memory, plants reap the reproductive benefits arising from enhanced pollinator fidelity.”5 It is not yet known whether the caffeine in these powered flowers is addictive to bees, though more research should determine that.6

By demonstrating this way that caffeine-containing plants can out-compete their neighbors for the attention of their pollinators, this discovery demonstrates a very logical reason that our Creator made caffeine. And with moderation, many of us are now able to reap the benefits. Now, of course this research offers no support for evolution (and the researchers don’t claim that it does). But we just thought you would be fascinated by another example of God’s amazing creative genius in designing these amazing little creatures and the plants they feed on.