In this illustrated lecture, Dr. Menton explains that the current view of bird evolution via dinosaurs is far from probable and goes against all observable evidence.

In a recent dinosaur article titled “The Dinosaurs That Didn’t Die,” National Geographic argues, “More than 10,000 species still roam the Earth. We call them birds.”

Included with the article is an image showing dinosaurs chasing ducks on the beach “67 million years ago.” Ducks and dinosaurs together? What gives?

Evolution is so ingrained in our culture that most people assume modern-looking birds didn’t live with dinosaurs, but this is not the case. Paleontologists have found many examples, including one—Vegavis—that looks just like a modern duck.

Evolutionists assume this bird looks similar to today’s ducks because they assume all waterfowl must have evolved from this original ancestor. But that still begs the question: why does it look so “modern”?

We find an easy answer if we go to the Bible. “Ancient” ducks look modern because they are: God created every kind of bird, including the duck kind, only 6,000 years ago. Then how did they appear with dinosaurs? Evolutionists believe dinosaurs evolved into several separate families of birds while the dinosaurs were alive. 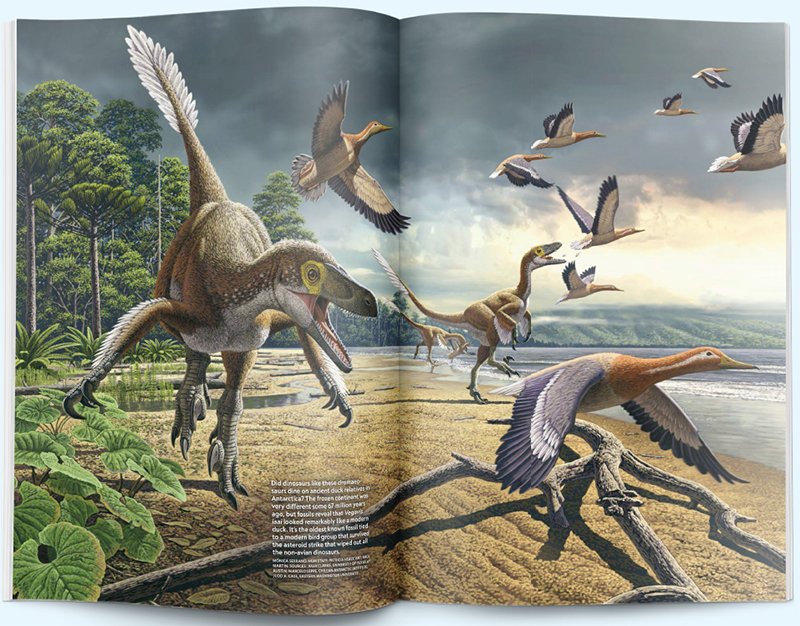 The May 2018 issue of National Geographic depicts dromaeosaurs chasing these birds, Vegavis iaai, “that looked remarkably like a modern duck.”

It boggles the imagination (and is a huge point of contention among evolutionists) how powerful land predators could transform into graceful fliers with a completely different body plan. The biblical perspective is confirmed by the evidence: God created every kind of flying creature in a single day, and every kind of land animal on the next day, just as Genesis 1 documents. Some of their descendants were then buried during the flood—together.

They were all beautifully designed to fly or run because God made them that way.

Previous Article Why Are Wasps So Evil?