Did a Dinosaur Get Its Feathered Tail Caught in Amber?

Once again the popular media is abuzz with a new evolutionary breakthrough. This time it is purported to be a feathered dinosaur tail trapped in amber! 1 Amber is essentially fossilized tree sap that may on occasion include insects and other small organisms of the type that one might expect to get trapped in tree sap. But a dinosaur tail trapped in tree sap? It should be noted that the fossil is not a whole dinosaur tail, but rather only a small piece of a tiny feathered tail measuring about 1.4 inches in length and containing 8 vertebrae, each about the size of a grain of rice! It is estimated that this would make this presumed relative of T. rex about the size of a sparrow. The tail piece is undoubtedly covered with tiny feathers that are essentially identical to those of modern birds, but is this in fact a dinosaur tail rather than a bird tail?

The feathered tail specimen known as DIP-V-15103 was discovered by Chinese paleontologist Lida Xing while shopping in an amber market in Myanmar (formerly Burma). He purchased a piece of Myanmar Mid-Cretaceous amber that contained a tiny feathered tail piece as well as various insects. Without knowing its in situ origin, right away, "he knew he had something special"2 and declared it to be the tail from a 99-million-year-old feathered theropod (bipedal) dinosaur. Had it merely been a piece of bird tail with feathers, it would have been of only passing interest. But a real dinosaur with undisputed feathers clearly attached to the tail is a very different matter. So let’s critically examine the evidence published by Xing et al.3

Although no living birds have a long bony tail with vertebrae, some extinct birds in the fossil record, such as Archaeopteryx, had such a tail. Thus, the presence of several tail vertebrae in a fossil is not necessarily evidence that the fossil is a dinosaur rather than a bird. What then led to the conclusion that this was a dinosaur tail rather than a bird tail? The authors have pointed out that the long tail of the bird Archaeopteryx has some fused vertebrae at its terminal end, while the vertebrae in their amber-embedded specimen appeared to be all separate. But they also point out that their 1.4-inch-long section of tail with eight vertebrae was from somewhere in the middle of a tail that probably had 15–25 vertebrae. Thus, it is specious to argue that DIP-V-15103 is necessarily a dinosaur, based on the lack of fusion of terminal vertebrae. Moreover, the authors concede that because soft tissues in the tail had a density insufficiently different from that of the skeletal elements in their Synchrotron Radiation X-ray scanning studies, diagnostic and comparative details of tail vertebrae were obscured.

The DIP-V-15103 tail had a bilaterally paired series of posterodorsally oriented feathers as well as another row of feathers on each side of the tail, all evenly spaced along the entire length of the tail section. This arrangement formed two laterally directed keels of plumage on either side of the tail vertebrae. Overall, the left-right paired arrangement of feathers in linear rows is similar to the pterylae (feather tracts) and rectrices (tail feathers) in modern birds.

All feathers were nearly identical to one another and similar in structure to the pennaceous feathers in modern birds, yet the authors refer to the feathers as “primitive plumage.” But the only “primitive” feature mentioned is that the rachis (central shaft) of the feathers is somewhat thinner than that of most modern feathers. Indeed, they claim that the rachis is no thicker than the branching barbs, but this is not at all evident in examining their published photographs. In fact, each feather of DIP-V-15103 has a well-developed rachis with barbs and barbules. This contrasts sharply with the nebulous fine filaments (dino fuzz) that have been referred to as “feathers” or “proto feathers” in non-avian dinosaurs (most evolutionists consider birds to be dinosaurs, but real dinosaurs are referred to as non-avian dinosaurs, while real birds are referred to as avian dinosaurs). It is obviously not very exciting for an evolutionist to report unambiguous feathers on an avian dinosaur such as a robin, but it is career making, with the help of National Geographic, for an evolutionist to claim that such feathers occur in a non-avian dinosaur like a theropod dinosaur. 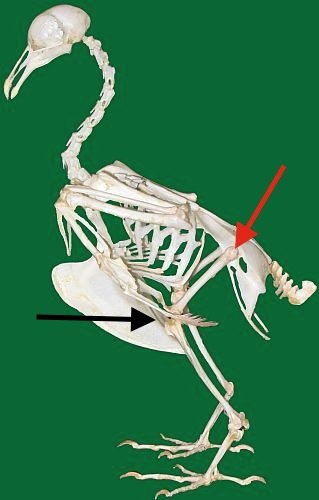 Figure 1. Pigeon skeleton. Note that the balance fulcrum is at the knee as shown by the black arrow. If a bird were able to stand up from the hip rather than the knee, it would fall forward because there is very little weight behind a fulcrum, which would be located at the head of the femur as shown by the red arrow. Adapted from w:de:Benutzer:Uwe_Gille (http://de.wikipedia.org/wiki/Bild:Vogelskelett.jpg) [GFDL (http://www.gnu.org/copyleft/fdl.html) or CC BY 3.0 (http://creativecommons.org/licenses/by/3.0)], via Wikimedia Commons

It is noteworthy that the DIP-V-15103 tail showed no obvious evidence of muscle tissue. If it had muscle, it was very sparse, suggesting that the tail, while flexible, had little active movement. As in the case of Archaeopteryx, the calamus (quill) of the feathers appears to attach either on or near the tail vertebrae. The important issue here is the very low weight of the tail. In contrast, theropod dinosaurs had heavy muscular tails that balanced the weight of the dinosaur while walking on two legs. Thus, in walking position, a T. rex had as much weight behind its hip joint as it had in front. The tail of DIP-V-15103, on the other hand, would have offered little counterbalance to any weight anterior to the hip.

Birds are unique among terrestrial vertebrates in that they walk from their knees on down. Their femurs and knees are incorporated into their body wall, and the femur moves very little during walking. This means that while the balance point or fulcrum of dinosaurs is from the head of the femur articulating with the hip bone (pelvis), the balance point on birds is at their knee, which is further anterior in birds. This is important because only a very small portion of a bird’s weight is behind its hip joint. If a bird walked from its hip rather than its knee, it would fall on its beak—and so would DIP-V-15103.

We conclude that DIP-V-15103 is a bird, and not a 99-million-year-old theropod dinosaur. This is supported by the discovery of 99-million-year-old bird wings including bones and feathers found by Lida Xing et al. in the same type of Burmese amber as DIP-V-15103.3 I reject the age assigned to these fossils, but it shows that small birds, perhaps juveniles, left evidence of their unquestionably bird-like anatomy in Burmese amber. So where is the evolution?

Previous Article Where Should We Look for LUCA, Supposed Ancestor of All Life? Next Article Discovery Said to Show Dinosaurs Walked with Their Evolutionary Ancestors