Using what he calls “a heap of lovely fossils,” free-lance writer Brian Switek takes a swipe not just at creationists this week but also at fellow evolutionists. His own feathers ruffled by last week’s discussion here of the Doctor Who episode “Dinosaurs on a Spaceship,” Switek does reserve his choicest derogatory names for Answers in Genesis president Ken Ham. However, he also calls evolutionary paleontologists who do not believe birds evolved from dinosaurs “misguided researchers.”

Claiming that there is a “mountain of evidence that birds are living dinosaurs,” Switek writes:

To help them dispute the evidence, creationists have become followers of a group of misguided researchers who denounce the idea that birds are living dinosaurs. Paleontologists such as Alan Feduccia, Larry Martin, Theagarten Lingham-Soliar, and John Ruben insist that birds sprang from a different ancestor, one more closely allied with crocodiles than dinosaurs. They also claim that feathered dinosaurs such as Microraptor must be birds that lost the ability to fly. These scientists, while they have made worthwhile contributions in other areas of fossil research, have not provided a reasonable, testable hypothesis for an alternate bird origin, and they take an entirely critical approach to the work of others. In other words, they are acting a bit like creationists—pushing a particular agenda, unhindered by evidence, because of a preconceived conclusion.

Thus Switek implies that the only evolutionary scientists he respects are those who toe the party line. The feathered dinosaur crowd is free to criticize the work of others, but Switek takes these scientists to task for their “critical approach to the work of others.” He accuses them of coming up with no “testable hypotheses” for an alternate bird origin. Thus Switek indicates that the feathered story must be right because experts in the field—evolutionary experts at that—disagree but fail to provide an alternative evolutionary view.

Furthermore, Switek says these “misguided” scientists have provided no “testable hypotheses” for bird origins. Here he, like Bill Nye, confuses “here and now science” (experimental, operational science) with historical (origins) science.1 Experimental science—the kind that makes real discoveries in the present world—is based on making observations and performing controlled scientific tests. Since the origin of life occurred in the unobservable past, it is not amenable to controlled, repeatable scientific evaluation.

Switek believes dinosaurs—surely some of God’s most impressive creatures—are unsuitable mascots for biblical creation science. Explaining to people how dinosaurs fit into biblical history is however a wonderful way to free them from bondage to the evolutionary ideas that permeate our culture. And dinosaurs are great conversation starters, opening the way not for contentious arguments but for removal of evolutionary stumbling blocks to trusting Scripture. What a fun way to tell others about our Lord’s creation and about the Lord Jesus Christ! The above bumper sticker was Answers in Genesis’ theme back in 2005, but it is still available in our bookstore. 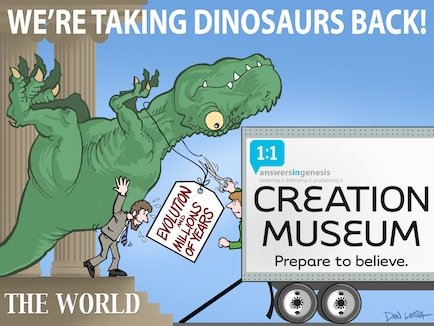 This cartoon makes clear the purpose of "We're taking them back!" The secular humanist world uses dinosaurs to attract children's attention to their evolutionary message. And judging from the outcry against the Creation Museum's billboard campaign—which has decorated many major highways with our dinosaurs—the secular humanists do not like it when we use dinosaurs to illustrate biblical truth. Image credit: Dan Lietha, cartoon/illustrator, Answers in Genesis

Switek also criticizes the creationist campaign to “take dinosaurs back.” He writes, “This isn’t about science. It’s about marketing.” And what does he say Answers in Genesis is marketing? “Creationists, in Ham’s view,” he reports, “should use dinosaurs as star attractions to get the public to imbibe the religious swill he and his organization peddle.”

Switek himself demonstrates that this isn’t about science; it’s about worldview! He writes, “Creationism is concerned with dinosaurs only as marketing tools to sell their interpretation of a vengeful God.” And then he explains that the evolutionary view in which “our own mammalian progenitors snuffled around in the undergrowth during the majority of the dinosaurian reign” has its own metaphysical purpose: “If we can be humble enough to approach the fossilized dinosaur remains with questions, rather than prepackaged dogma, we’ll be better able to understand why we’re here at all.”

Well, the fact is, the rabid enthusiasm surrounding feathered dinosaurs is itself about marketing: marketing a dangerous idea—the idea that the God of the Bible cannot be trusted. The idea that God—if He exists—is too powerless to create the universe by the power of His word, to remember how long it took Him, and to communicate clearly how He did it. That idea is dangerous because, if God cannot be trusted to tell us the truth at the beginning of the Bible, then how could He be trusted to tell us the truth about Jesus Christ (John 5:46–47). The truths in Genesis explain the origin of sin and death, telling us why each of us—whether we admit it or not—desperately needs Christ.

Dinosaurs long ago became an icon of the evolutionary war on biblical truth.

Dinosaurs long ago became an icon of the evolutionary war on biblical truth. Switek thinks, “Dinosaurs are unlikely symbols of religious fundamentalism.” But there is nothing inherently evolutionary about dinosaurs. They are just the fossilized remains of extinct animals. Nothing about them proves they are millions of years old or that they evolved into birds; those ideas are merely evolutionary interpretations. Unfortunately, evolutionary mythologizing about dinosaurs has helped evolutionists tell a compelling story. Bill Nye explained the strategy in his 2010 Humanist of the Year award acceptance speech:

I believe that the way to do it [referring to curing the “problem” of people not believing in evolution] is by coming up with stories. People respond to stories. . . . But what we have to do is find a story that is more compelling, and I think we can plan that easily because instead of focusing on the truth we focus on the pursuit of it.2

Thus, evolutionists have now recruited feathered dinosaurs to make evolutionary storytelling about the past engaging and compelling enough to capture hearts, minds, and imaginations.

No wonder Switek is critical of Answers in Genesis efforts to “take dinosaurs back”! Fantasy is fiction, but the Word of God is full of authentic history to back up its claims. The Bible tells a compelling story—a real-life story—the story of an omniscient all-powerful and holy Creator who created all that is, who made mankind in His image, and whose human creations (Adam and Eve) rebelled against Him: the story of how from the beginning God set in motion a plan to redeem mankind from the hell we all deserve by sending His Son Jesus Christ into the world. 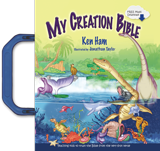 The dinosaurs on the cover of My Creation Bible proved to be a great conversation starter, prompting the question, “What do dinosaurs have to do with the Bible?”

“We’re taking them back” is not a new slogan—Answers in Genesis has been using it for quite a while now. And a few years ago while visiting a Tennessee church where my husband Dr. Tommy Mitchell was speaking, a woman saw My Creation Bible with dinosaurs on the cover. Puzzled as to what dinosaurs had to do with the Bible, she soon exclaimed, “That’s great! That’s wonderful! We’re taking our children back! And we’re using dinosaurs to do it!” Because that’s what it comes down to: our children have become the currency of success. They need to know that real science affirms what the Bible says. If we are “marketing,” we are marketing to win them for the kingdom of God. The hearts and minds of our children are at stake.