Do four-winged Cretaceous birds confirm dinosaurs’ role in the evolution of flight?

For some years many evolutionary paleontologists have maintained that unmistakably mature feathers appear on the legs and feet of several non-avian dinosaurs. (As we’ve discussed in numerous other articles, these genuinely feathered creatures, such as Microraptor and Anchiornis, are actually birds.) The aerodynamic significance of those feathers is debated, as is their relevance in the evolution of birds and of flight. Now, Chinese paleontologists led by Xiaoting Zhonghe report that these four-winged configurations are present in 11 different early Cretaceous birds. 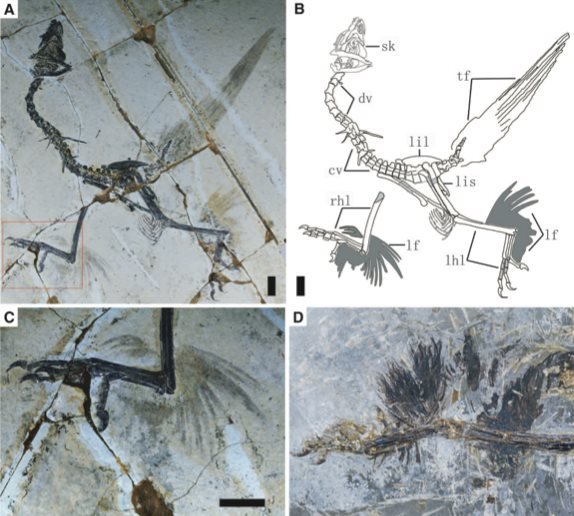 This fossilized bird is called a Sapeornis. The feathers on the hind-limbs are indicated in the drawing and shown in the close-up photographs. The feathers are fairly long and appear associated with the lower portion of the tibiotarsus leg bones and the metatarsal foot bones. Image courtesy of Science. 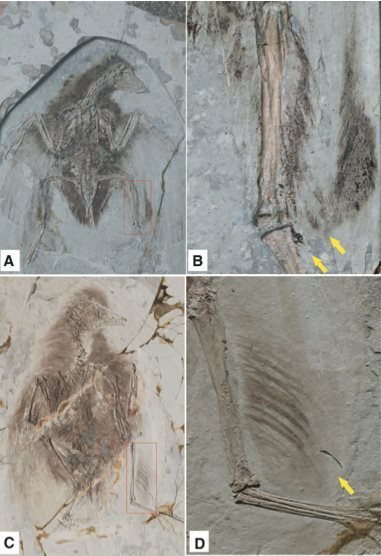 These Cretaceous birds also have feathers on their legs. Confuciusornis (A and B) appears to have long feathers along the entire length of the tibotarsus (leg) and possibly some on the upper part of the metatarsal (foot). The enantiornithine Cathayornis (C and D) has large feathers only associated with the leg. Image courtesy of Science.

The feathers in these fossils are actual feathers, not “dinofuzz” or other such structures of questionable identity. These appear to have been associated with the legs and feet of the specimens to varying degrees. Most modern birds don’t have well-developed feathers on their legs. And while some of these fossilized birds had feathers on both legs and feet, others had them only on the legs. Therefore, the authors conclude that feathered flight likely evolved through the four-winged path from dinosaurs. They believe that hind-limb flight feathers gradually evolved away, starting with the feet and then the legs, in favor of scaly feet and legs unencumbered by feathers.

While they do not know precisely how these hind-limb feathers performed during flight, they agree with other investigators that they had some sort of aerodynamic function.

While they do not know precisely how these hind-limb feathers performed during flight, they agree with other investigators that they had some sort of aerodynamic function. Even though the feathers vary in symmetry and size among the specimens, all the foot-feathers appeared to have formed a sheet-like surface (like a wing) and to have curved rachises. This, they write, suggests a genuine aerodynamic role such as “providing lift, creating drag, and/or enhancing maneuverability.”1

The authors note that some modern predatory birds actually do have well-developed contour feathers on their legs, though they lie at a low angle to the skin instead of sticking out like wings. And some, like the golden eagle, are generously supplied with fluffy feathers on their feet.2

The investigators acknowledge the difficulty of determining the true anatomy and the functional roles of feathers on extinct fossilized animals. After all, “preservational limitations make it difficult to reconstruct the precise location and orientation of the leg feathers.”3 In other words, when a fossil is preserved, it is flattened with the legs splayed out or tucked under the body, leaving paleontologists to guess about the three-dimensional anatomy and aerodynamic performance of the original creatures.

While it is refreshing to read a clear admission of the difficulty attending the reconstruction of ancient anatomy, it is unfortunate that evolutionary paleontologists seem less able to see the limitations of their reconstructions of evolutionary transitions. The fact that some birds had feathers on their legs and feet and others were feathered only on their legs does not demonstrate that flight and feathers were evolving, that birds evolved from dinosaurs, or even that some kinds of birds were evolving into other kinds of birds. God created various kinds of birds about 6,000 years ago, and neither feathers nor flight capability had to evolve. They, like all animals, were designed with the ability to vary and reproduce within their created kinds.

The fossil record does not provide a sequential history of animals changing into new and more complex kinds of organisms over millions of years. Instead, it provides predominantly a record of the order of catastrophic burial of many kinds of organisms, many of which have become extinct.

Thus, what we see in this study is that many now-extinct birds may have used hind-limb feathers to assist in flight. Or perhaps they just had hind-limb feathers like those of the few modern birds that have them; “preservational limitations” do limit what can be truly known about these extinct birds. These feathery fossils tell us something about diversity among birds God created, but nothing about how birds could evolve from dinosaurs.