Discovery Said to Show Dinosaurs Walked with Their Evolutionary Ancestors

Buried in Triassic rock, fossils frozen in time have surprised evolutionary scientists by showing that lagerpetids—animals believed to be dinosaur ancestors—were walking with full-fledged dinosaurs “since the first stages of dinosaur evolution.”1

The fossils—two dinosaurs and two non-dinosaurs (the lagerpetids)—were unearthed in southern Brazil’s Carnian Santa Maria Formation. This rock formation is believed by evolutionists to be about 230 million years old. By evolutionary reckoning this Late Triassic find represents one of the earliest appearances of dinosaurs in the fossil record. It is also the earliest appearance of animals believed to be their evolutionary precursors.

“This is the first time nearly complete dinosaur and non-dinosaur dinosauromorph remains are found together in the same excavation,” the authors of the study published in Current Biology write, “clearly showing that these animals were contemporaries since the first stages of dinosaur evolution.”2

But does it really? It clearly shows that the two kinds of animals coexisted, having been buried together. In fact, their excellent preservation suggests they were buried together quite rapidly. But their coexistence says nothing about “the first stages of dinosaur evolution.” Any such conclusion is based on the belief—not the scientifically demonstrable fact—that dinosaurs evolved through natural evolutionary processes. 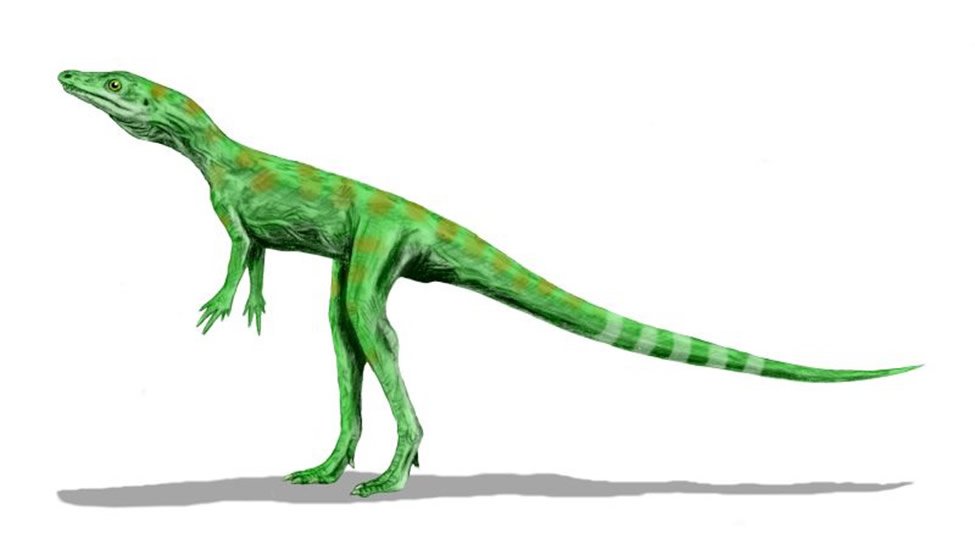 This is an artist’s conception of a typical lagerpetid. Lagerpetids resemble dinosaurs in many ways, but due to some skeletal differences they are not considered dinosaurs. Image by ArthurWeasley~commonswiki, via Wikimedia Commons.

This discovery will, according to headlines, rewrite the evolutionary history of dinosaurs. However, because both the age of the fossils and their supposed relationship to each other are based on numerous unverifiable assumptions, only evolutionary explanations will be accepted by the evolutionary community.

For instance, University of São Paulo paleontologist Max Langer, who led the research, says, “We previously thought that once dinosaurs appeared, they sort of out-competed and drove the other animals like lagerpetids to extinction, and now we know that they were living side by side.”3 Furthermore, by comparing the skeletal anatomy of the dinosaurs and lagerpetids, Langer explains, “We can know which characteristics are actually unique to dinosaurs and which appeared before in those precursors.”4

We can know which characteristics are actually unique to dinosaurs and which appeared before in those precursors.

The dinosaurs found in the formation are sauropodomorphs, considered to be ancestors of the herbivorous sauropods. These sauropodomorphs’ teeth look just like teeth of animals believed to be completely carnivorous. Therefore, Langer and colleagues conclude that dinosaurs evolved as completely carnivorous animals, and that herbivorous sauropods evolved from these carnivores. Again, these conclusions are based completely on faith in the unverifiable, worldview-based dates assigned to the fossil record and on faith in the evolutionary notion that all kinds of animals are ancestrally related through the natural processes of evolution.

Let’s consider another way to look at the same information Langer and his team carefully dug up and analyzed. Suppose the fossils in various layers of rock containing dinosaurs, such as the Triassic, Jurassic, and Cretaceous, were deposited rapidly during the catastrophic global Flood of Noah’s day, roughly 4,350 years ago? Then those dinosaur fossils in them would not represent the evolutionary history of the “terrible lizards” from 248 to 65 million years ago. Instead all those dinosaur fossils would be representatives of the varieties of dinosaurs that walked the earth at the same time, along with all the other varieties of animals that existed, along with mankind, when Noah was building the Ark.

And if that is true—and it is, by the way—then dinosaurs did not evolve from lagerpetids at all. God created all the created kinds of animals about 6,000 years ago. He did so in the space of just a couple of days, according to His own eyewitness account recorded in the Bible, and He created them to reproduce after their own kinds. Therefore, no evolution was involved. In light of biblical truth, the coexistence of animals thought to be ancestrally related makes sense without invoking any evolutionary claims at all!

What about those sharp teeth on the dinosaur fossils, fossils thought to be among the oldest dinosaurs in the fossil record? Does the discovery of sharp teeth in these dinosaurs dispute Scripture? Not at all.

We know from God’s eyewitness account of creation in Genesis that carnivory was not a part of God’s original creation. Carnivory developed among some kinds of animals after Adam’s rebellion brought sin and death into the world.

With this biblical understanding of history, let’s consider what Langer’s team knows and what they can only assume. Without evidence of a meaty meal in the dinosaurs’ stomach, we cannot know for certain what they ate. Sharp teeth can be used for more than ripping flesh. And even if these dinosaurs were carnivorous varieties (and we have no problem with that possibility—the fossil record demonstrates that many varieties of animals were carnivorous by the time of the global Flood), their placement in the fossil record would not indicate carnivory existed before herbivory. That notion is based on worldview-based assumptions, not observable science. These dinosaurs’ placement in the fossil record only indicates roughly when during the global Flood they were catastrophically buried compared to animals buried in other rock layers. (Read more about the age assumptions that are based on the fossil record in “Doesn’t the Order of Fossils in the Rock Record Favor Long Ages?”)

What they choose to believe about the unobservable past and the time of origins depends on their worldview.

When scientists look at fossils, they can observe their anatomy and compare it to the anatomy of other animals. Sometimes they can deduce information about what they ate from stomach contents. Sometimes they can even know something about their skin covering or internal organs if soft tissue is preserved. But to draw conclusions about the age of that fossil, the origin of that sort of animal, or that animal’s evolutionary relationship to other kinds of animals, they must make certain assumptions about the unobservable past. What they choose to believe about the unobservable past and the time of origins depends on their worldview.

If they ignore God’s Word—the only eyewitness account available that describes the origin of life in all its kinds—and demand what they see be interpreted within their own evolutionary worldview, then they inevitably draw evolutionary conclusions. They view the evidence in a way that only reinforces their evolutionary beliefs, even if they must make a few adjustments to accommodate new discoveries.

But if they accept God’s eyewitness account of our origins, then they can understand their discoveries in the light of truth. And they will then soon discover that nothing in observable biological science contradicts God’s Word. What we see in God’s world—whether fossils or living animals—is consistent with what we read in God’s Word.

Previous Article Did a Dinosaur Get Its Feathered Tail Caught in Amber? Next Article Are Humans Evolving Through Caesarean Sections?