Dinosaurs May Have Been Neither Warm- Nor Cold-Blooded

Dinosaur body temperatures, like Goldilocks’s preferred porridge, may have been neither hot nor cold but somewhere in the middle.

Were dinosaurs cold-blooded or warm-blooded? Debate has raged for decades. The latest answer: neither. They were probably in between.

“Our results showed that dinosaurs had growth and metabolic rates that were actually not characteristic of warm-blooded or even cold-blooded organisms,” explains University of Arizona evolutionary biologist and ecologist Brian Enquist. “They did not act like mammals or birds nor did they act like reptiles or fish. Instead, they had growth rates and metabolisms intermediate to warm-blooded and cold-blooded organisms of today. In short, they had physiologies that are not common in today's world.”

The Middle Ground in Thermophysiology

Common, no, but definitely not unheard of. A number of living animals from traditional cold-blooded (ectothermic) or warm-blooded (endothermic) categories are actually in this in-between group, including tuna, great white sharks, leatherback sea turtles, and spiny echidnas. Generally speaking, the moderate metabolic rates of these animals produce enough heat to keep their body temperatures above cool environmental temperatures.

“Collectively, these animals are distinguished from endotherms and ectotherms,” the researchers write, “by a weak or absent metabolic defense of a thermal set point but sufficient internal heat production to maintain Tb > Ta [body temperature greater than ambient temperature] when Ta [ambient temperature] is low.”1 In other words, the heat generated by their metabolism is sufficient to keep them at least a little bit warm. Their body temperatures are influenced but not completely controlled by their environment.

Enquist and his coauthor graduate student John Grady included these loosely regulated middle-ground animals in their statistical analysis. The calculated characteristics of dinosaurs clustered with this heterogeneous group. Enquist and Grady suggest that traditional warm- and cold-blooded classifications are overly simplistic. For some animals a better description would be “in the middle.” The authors of “Evidence for mesothermy in dinosaurs,” published in Science, have coined the term mesothermic for them. Grady says, “By examining animal growth and rates of energy use, we were able to reconstruct a metabolic continuum, and place dinosaurs along that continuum. Somewhat surprisingly, dinosaurs fell right in the middle.” 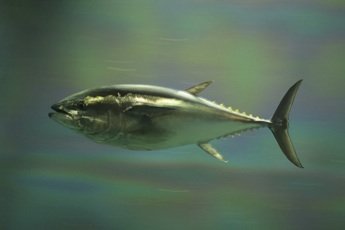 This Pacific Bluefin tuna is an unusual fish in that it is not cold-blooded. It is not strictly warm-blooded either, but it is able to preserve and utilize some of the heat generated by its metabolic processes thanks to a counter-current heat exchange circulatory system around its gills. It is not equipped to strictly regulate its body temperature like truly warm-blooded animals, however, and thus can reasonably be considered a mesotherm—a name coined to describe dinosaurs which may well have also been neither cold- nor warm-blooded. Image: Kasai Rinkai Park, Tokyo, Japan, Photozou through Wikipedia. 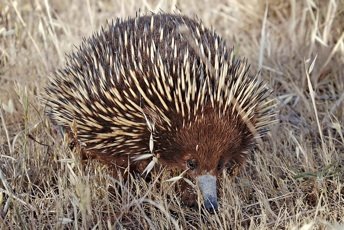 The echidna is an egg-laying mammal. Unlike other mammals, it does not maintain a strictly controlled body temperature independent of its environment. It is definitely not “cold-blooded” however. In hot and cool environments, the echidna maintains its body temperature at around 31 degrees Celsius but allows an enormous 10-degree range of variability around this set point while remaining active.4 Evolutionary scientists have traditionally viewed this egg-laying mammal as “primitive,” but its body’s thermoregulatory systems and heat tolerance mechanisms are actually quite sophisticated. Because its body temperature varies somewhat with the ambient environmental temperature, however, it could be considered a mesotherm. Image: Wikipedia.

The leatherback sea turtle differs in many ways from other sea turtles. Its leathery carapace is not bony; it has no beta-keratin in its scales; it has pointy projections on its lip instead of teeth; it lacks claws; and it is not cold-blooded. It is also not warm-blooded. The leatherback sea turtle possess several physiological characteristics that enable it to maintain a body temperature higher than its cold environment yet without the tight temperature control exhibited by warm-blooded animals and humans. Therefore it can be considered a mesotherm. Image: Brocken Inaglory, Wikipedia.

Popular opinion on the question of whether dinosaurs are cold- or warm-blooded has oscillated ever since Sir Richard Owen in the 19th century coined the name dinosaur. Owen suggested that such big “terrible lizards” might be more like warm-blooded animals.2 Resembling reptiles, however, dinosaurs were soon regarded as cold-blooded. But birds are warm-blooded, so once evolutionary scientists in the 1960s began looking toward dinosaurs in an effort to find evolutionary ancestors for birds, the push was on to show dinosaurs were warm-blooded after all. The question has remained unsettled. After all, even though the assumptions in the study are largely extrapolations based on living animal physiology, there are no dinosaurs alive today with which to confirm these conclusions.

Many experts are open to the idea that there is a spectrum of types in thermoregulatory physiology. Not all, however. Reptile physiologist Roger Seymour of Australia’s University of Adelaide, for instance, believes that only “genuinely endothermic dinosaurs would have wielded sufficient energy to remain dominant for 150 million years.”3

“Warm-blooded” animals are called endothermic because their body temperature is internally (hence, endo-) controlled. Warm-blooded animals eat often to “keep their biological engines revved and running,” so to speak, maintaining a high metabolic rate to generate heat and maintain a consistent body temperature. “Cold-blooded” animals are called ectothermic, because the environment outside their bodies (ecto-) controls their internal temperature, which may be cold or hot. Cold-blooded animals have a lower metabolic rate; that’s why a snake, for instance, can go weeks between meals. An animal’s metabolic rate affects its average activity level, how often it needs to eat, and how fast it can grow.

Ectothermy and endothermy are each advantageous in certain environments. Being mesothermic would combine some of those advantages. Grady suggests the dinosaurs “took a middle way—kind of like Goldilocks. And it seemed to work out very well for them. You know, if you are a little bit . . . warmer-blooded than a reptile, essentially your muscles fire faster; your nerves fire faster; you are a more dangerous predator.” (We presume Grady’s remarks are meant generally as some remarkably fast-moving snakes seem to be quite successful as predators. In the future the researchers plan to fine-tune their results according to typical environmental temperature, but that will necessitate many more assumptions regarding dinosaurs.) By not having to eat so much to maintain the high metabolic rate of a truly warm-blooded larger animal, Grady says, “That means maybe they [mesothermic dinosaurs] could get a lot bigger than a mammal could be, which wouldn’t be able to eat enough if it was the size of a Tyrannosaurus rex.”5 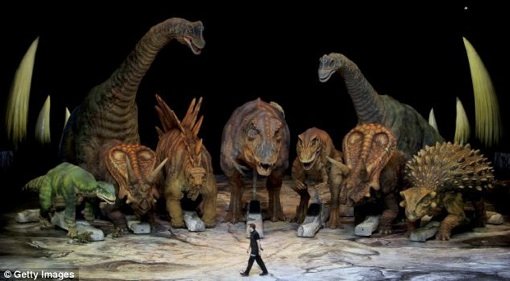 “Meet the Mesotherms” reads the caption of this dinosaur collection pictured on the Daily Mail. Researchers have published evidence that dinosaurs may have been—like a leatherback sea turtles, great white sharks, tuna, and echidnas—able to regulate their body temperature within limits. They call this trait, somewhere in between being “warm-blooded” endotherms and “cold-blooded” ectotherms, mesothermy.  Image: Getty Images through Daily Mail Online

How big an animal gets and how fast it gets there depend on its metabolic rate. Therefore, growth rate and body mass should provide a clue about metabolic rate and hence whether an animal is warm- or cold-blooded. Enquist, Grady, and colleagues used observable information about living animals to make predictions about the metabolic rate of extinct ones—the dinosaurs. They performed a statistical analysis of the growth rates and body mass of 381 species including 21 dinosaur species of various sorts.

Bone is continually remodeled, and the rings of bony material surrounding blood vessels inside bones reflect this process.

Since fossils do not grow, how did they know the growth rates of the dinosaurs in the study? They used growth rings. Bone is continually remodeled, and the rings of bony material surrounding blood vessels inside bones reflect this process. These concentric bony layers may be evenly spaced or vary in thickness, like tree rings. Scientists have long known that these rings vary in thickness seasonally in cold-blooded animals, resulting in lines of arrested growth (LAGs), which are found in many dinosaurs. They once assumed that warm-blooded animals, because they maintain a consistently high metabolic rate to keep a constant body temperature, would have evenly spaced rings. As we discussed in “Cold-Blooded or Warm-Blooded?” scientists now know that LAGs appear in both warm- and cold-blooded vertebrates. 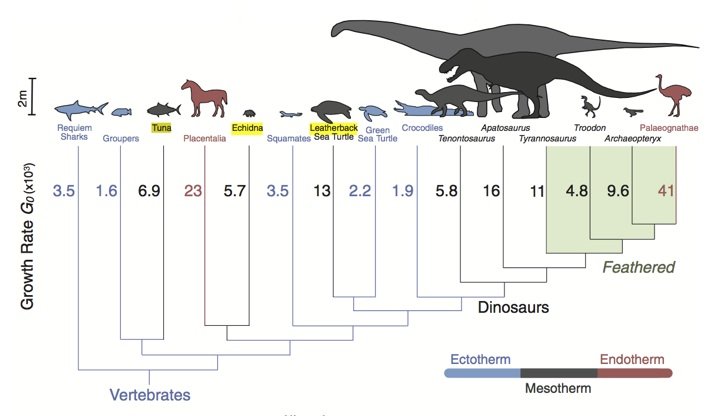 This chart shows a sampling of vertebrate species included in the statistical analysis. Here their calculated growth rate is compared to thermoregulatory physiology. Three of the eight extant species of mesothermic animals are highlighted in yellow. Calculated metabolic rates for dinosaurs were most consistent with this group. The green shaded section indicates so-called “feathered dinosaurs” and includes warm-blooded modern birds on the far-right and the extinct bird Archaeopteryx. Image: J. Grady et al., “Evidence for mesothermy in dinosaurs,” Science 344, no. 6189:1268–1272, doi: 10.1126/science.1253143.

Modern birds are warm-blooded, grow rapidly, and have a high metabolic rate that supplies the great amount of energy needed for flight. The authors were surprised that so-called “feathered dinosaurs, including the protoavian Archaeopteryx, did not grow markedly differently from other dinosaurs.”1 They expected that animals evolving toward flight-readiness would have bumped up their metabolic rates to be more in line with modern birds.

Instead, “it appears that modern avian energetics did not coincide with feathers or flight, which is consistent with fossil evidence that modern bone histology in birds did not appear until the late Cretaceous,”1 they write. It is not surprising that extinct birds like Archaeopteryx differed somewhat from modern birds in these calculations as the extinct bird differs in various other ways from modern birds. They are simply different kinds of birds, not an evolutionary continuum from dinosaurs to sparrows. There is no support for the claim that birds evolved from dinosaurs in this study.

God created all kinds of animals during Creation Week about 6,000 years ago. That would have included endotherms, ectotherms, and “mesotherms.” Leatherback sea turtles, for instance, differ from other sea turtles not only in their ability to generate body heat through an elevated metabolism but also in other ways—their lack of claws, the shape of their teeth, and the molecular and morphologic construction of their shells. Baraminologists suspect they represent a particular created kind of turtle.6

Animals reproduce and vary within their created kinds and are never observed evolving into new, more complex or different kinds of animals.  If the thermophysiology of dinosaurs was mesothermic, then it is reasonable to conclude that God designed them to be so, not that they were in the process of evolving from cold-blooded ancestors into warm-blooded avian descendants.