Chromosome Tales and the Importance of a Biblical Worldview

Evidence never speaks for itself; it must be interpreted. When it is interpreted in a particular worldview, it can sound very convincing that the evidence supports that worldview. This was the case for the proposed chromosomal fusion that supposedly resulted in human chromosome 2. It was promoted as unequivocal evidence that humans and apes shared a common ancestor. In a biblical worldview, it is possible for a chromosome to have resulted from the fusion of two smaller chromosomes. However, there were details about the story that didn’t make sense. The biblical worldview provided the motivation to dig deeper. Further investigation now makes it clear that human chromosome 2 was not derived from a fusion of ape chromosomes; its structure is consistent with being designed by a wise Creator.

In my lifetime I have seen a number of supposedly powerful arguments for evolution come and go.  Generally, they seem powerful because it is implied there is only one way to interpret the evidence, and only an evolutionary interpretation is given.  I have found that the biblical worldview is far more robust, and it is only a matter of time and some research before it is clear that the evidence is better explained by a biblical model. 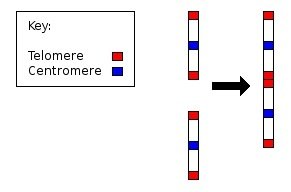 Human chromosome 2 was said to have been formed by the fusion of two primate chromosomes that remain separate in chimps. It was supposed to be an end-to-end (telomere-to-telomere) fusion. Known fusions in mammals are different in that they occur near at least one centromere region.

A few years ago I wrote about one example of a “compelling” evolutionary argument, the supposed evidence for a fusion involving human chromosome 2.1  According to Dr. Ken Miller, this was incredibly powerful evidence of common ancestry between humans and apes.2  Since apes have 48 chromosomes (24 pairs) and humans have 46 (23 pairs), evolutionists propose that a fusion occurred to account for the difference.

In a YouTube video Dr. Miller showcases the supposed fusion as a prediction of evolution and boldly states:

Chromosome fusions do occur.  The topic is of particular interest to me, so in my previous article I highlighted a number of assumptions hidden in Dr. Miller’s argument.  Evidence of a fusion would not be an automatic “slam dunk” against biblical creation.  Interestingly, since that article was written, there has been considerable research done suggesting that there never was a fusion on human chromosome 2.  According to the quote by Dr. Miller above, this would be a “slam dunk” against evolution.

What Is Really in the Scientific Literature?

First, an investigation into the scientific literature revealed that scientists didn’t find the proposed fusion location by hunting for sequences that appeared to be a fusion site, as Dr. Miller had suggested.4  The idea of a fusion on chromosome 2 was suggested based on the assumption of common ancestry and  some similarities between chimp chromosomes 12 and 13 (now 2A and 2B) and human chromosome 2.5  The idea of a fusion is certainly a reasonable proposal within the evolutionary model.

Secondly, the proposed fusion site did not look like those documented in other mammals.6  Fusions known to occur in animals are characterized by sequences known as satellite DNA, and most often occur around centromeres.  The proposed fusion on human chromosome 2 was supposedly a telomere-to-telomere fusion, lacking satellite DNA.

Further, the proposed fusion site did not look like evolutionists expected.  It should have contained long stretches of a tandemly repeated sequence (TTAGGG), but this pattern was not seen.  Instead this sequence was not as prevalent as expected, and often it was not repeated in tandem (i.e. two or more in a row).  This surprised evolutionists, prompting the question “why are the arrays at the fusion site so degenerate?”7

There was an additional surprise.  The proposed fusion site was surrounded by unexpected features.  For over 600,000 bases surrounding it, there exist many different types of human-specific genes – none of these genes are found in the chimp.  Telomeres do not contain genes.

In addition to the fusion site, there is supposedly the “remains” of a second centromere.  These were identified based on a type of alphoid sequence that is commonly found throughout the human genome in many locations, so this sequence is not specific to centromeres.  Thus, it was not too surprising they were able to find this sequence close to where the “fossil centromere” was supposed to be.4

All this shows that lay-level evolutionary arguments do not necessarily represent what is known from the scientific literature.  In fact, in my experience, the more compelling the evolutionary story, the less it resembles reality.  Evidence doesn’t speak for itself; it must be interpreted.  If someone presents evidence that appears to contradict the biblical history, one excellent response is to investigate more fully to see what is going on.  In fact, that is what has been done.

Further research by creation scientists reveals even more compelling evidence against the idea that human chromosome 2 was formed by a fusion, much less a fusion of ape chromosomes.  A closer look at the supposed “fossil centromere” has shown that it is not in the correct location assuming it originated from such a fusion.8  Further, the alphoid sequence in   humans (including at the alleged fossil centromere) does not match the alphoid sequence found in the chimpanzee.8

Focusing on the supposed fusion site itself reveals even more intriguing information.  Using the BLASTN tool, the alleged fusion site aligned (due to nucleotide similarity of 80% or more) with many regions on human chromosomes and only a few on chimpanzee chromosomes.  However, it did not align with the portions of the chimp genome that were supposedly involved with the fusion.9

Further investigation revealed that the supposed fusion site encodes a special region (DNA binding site) within a highly expressed gene.8  This makes sense of the earlier finding that this region aligned with many regions on different human chromosomes – since DNA binding sites are found in multiple locations around the human genome.  This gene had originally been characterized as a pseudogene, supposedly a broken gene.  Many pseudogenes are now known to be expressed and have been shown to carry out important regulatory functions.  The gene that the alleged fusion is located inside is highly expressed in many tissues throughout the human body. It is also highly networked with many other important genes expressed in the human body involved in blood cell development and cell signaling.  The alleged fusion site is really a functional feature in the human genome that helps regulate an important gene – it is not the result of a genomic accident, but has a special designed purpose.

A More Plausible Explanation of the Evidence

Based on this research, it appears that Dr. Miller’s snide suggestion that “that’s the way the designer made it”3 is actually a very sensible lay-level summary of the evidence.  The sequence does not match what would be expected by evolutionists, but instead encodes a portion of a highly expressed gene.  Obviously, this fits very nicely within a biblical worldview.  Sure, there could easily have been some changes to the sequence since the time of creation.  However, given its role today, it is functioning as something that was intelligently designed.

I recently visited Dr. Miller’s website,10 looking for an update by him on the alleged chromosome 2 fusion since I remembered how vigorously he promoted that concept. Alas, I didn’t find what I was looking for. Has he begun to doubt common ancestry between humans and apes?  It doesn’t look like it given that his website still promotes plenty of anti-creation and anti-ID material. This shows, as Ken Ham pointed out in his debate with Bill Nye, that it is not really about the evidence.  Everyone interprets evidence within a framework, or worldview.  If someone does not wish to consider the possibility of creation, there is no evidence that will ever convince them.

Previous Article Did Human Men Evolve to Take a Punch? Next Article Dinosaurs May Have Been Neither Warm- Nor Cold-Blooded