Silence of the Crickets Speaks Volumes About Variation and Selection

Hawaiian cricket “evolution” into stealth mode saves them from extinction.

Virtually silent cricket populations have independently emerged on two Hawaiian islands in less than 20 generations—“in what appears to be the blink of an eye in evolutionary time,” says Dr. Norman Bailey, whose team has been following the cricket story as it has unfolded over the past few years. 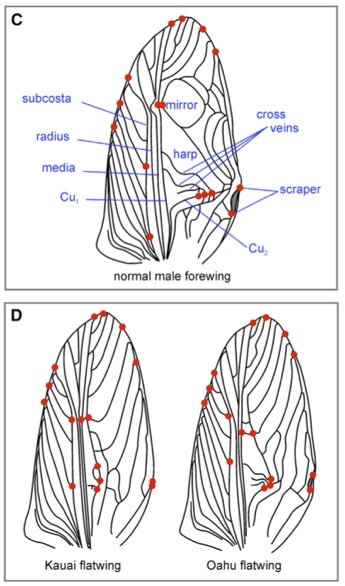 Normal male cricket wing anatomy is labeled with landmarks dotted for comparison with flatwing mutants from Kauai and Oahu. Flatwing is an X-linked mutation that has disturbed the anatomy of male cricket wings in two genetically and morphologically distinct island populations of field crickets (Teleogryllus oceanicus). Cricket females, like us, have two X chromosomes, but male crickets lack a corresponding Y chromosome and simply have a single X chromosome. The flatwing mutation is thus passed to offspring and expressed in males through the usual processes of Mendelian genetics. Image by S. Pascoal et al., via Current Biology.

On the left are photos of normal female and male cricket wings. Next in line are photos of male flatwings from Kauai and Oahu. Flatwings, like female wings, lack the equipment to sing. Image by David G. Forbes, via BBC.

Selection of these odd “flatwing” mutants for survival has been driven by the 1991 introduction of an acoustically astute parasitic fly (Ormia ochracea) that readily locates singing male crickets (Teleogryllus oceanicus) and lays its eggs on them. The male crickets subsequently die as larvae consume them. So devastating was the effect of this new predator on the singing male cricket population that “flatwing” cricket males—mutants lacking the wing equipment to sing—became the norm (96%) on the rural island of Kauai by 2003 and prevalent (45%) on the urbanized island of Oahu 70 miles away by 2005.

Differences in wing anatomy and genetic markers now confirm the silent survivors from Kauai did not seed the population of Oahu. The cricket team’s research, just published in Current Biology, has shown that the dual emergence of the mute mutant populations was two separate, independent events. Breeding trials demonstrate that each silent male population had an X-linked mutation that disturbed its wing anatomy in a different way. The team is excited about this example of “convergent evolution.” Dr. Bailey says, “This is an exciting opportunity to detect genomic evolution in real time in a wild system, which has usually been quite a challenge, owing to the long timescales over which evolution acts.”

“The abrupt appearance and rapid proliferation of silent flatwing crickets on the Hawaiian island of Kauai is a textbook case of rapid evolution in the wild,” Bailey’s team writes. “Remarkably, the initial discovery of flatwing on Kauai was followed by a seemingly identical effect in a separate population just 2 years later.”1 Silence was rapidly selected for survival in two separate events.

Cricket females ordinarily gravitate to male cricket song. How do they find their silent partners? There is a remnant of the singing population even on Kauai, and the quiet male crickets lurk within a few feet of the singers. How they then secure the attentions of the females that arrive in the vicinity without a courtship song remains a mystery, but researchers suspect the less choosy females are likewise selected for survival since they are the mothers of subsequent generations.

Some websites and blogs have been presenting this supposed example of “evolution in action” as if it were “game, set, match” in their battle to discredit Bible-believing Christians. One writes, “WARNING: Do not tell your fundamentalist/creationist friends this news unless you want to watch their heads explode from all the cognitive dissonance.”2 The same writer asks, “Specifically, crickets in two separate places have either been told to ‘shut it’ by God (hey miracles could happen I suppose, but crickets?), or they evolved to no longer make a joyful noise unto the Lord to protect themselves from predators.”2 He concludes with the taunting challenge, “Can't wait to hear what explanation the Creationists have for God deciding to cause separate mutations to these Hawaiian crickets to achieve the same result: keeping them quiet.”2

Besides ignorantly writing as if Bible-believing scientists were oxymoronic morons who believe in magical black boxes in which everything unusual is just a miraculous zap from God, the author of this piece of ad hominem nonsense joins the chorus of those evolutionists who stand amazed at the fast-tracked evolutionary marvel that twice produced populations of silent crickets through survival selection of a simple mutation that deprived the male crickets of properly configured functional scrapers on their wings. 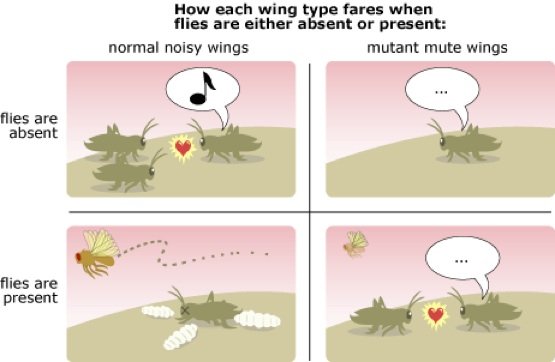 This diagram illustrates the trade-off between singing and survival, a deadly game played out on two Hawaiian islands since 1991. Male cricket song attracts females, but when a parasitic predator tuned to that song arrived in paradise the male cricket population plummeted, their bodies pillaged by the larva that consumed them. Though the flies do parasitize silent males too, quiet crickets are harder to find and have an enormous survival advantage. These silent survivors have now reproduced successfully enough to fill the populations of two islands with silence. Image from Berkeley.edu.

This discovery is a marvelous example of how efficiently the laws of nature that God our Creator put in place function. Here these seemingly useless and even detrimental variations—likely the results of random mutations—within the genome of a created kind of animal were naturally selected for their survival value under extreme predatory pressure. Cricket populations were preserved because this natural process capitalized on genetic “mistakes.” After all, a silent male cricket would not ordinarily be able to attract a mate, so the random mutations that twice have produced it would not ordinarily be maintained in a population with any high degree of prevalence. Incidentally, 2% of the male cricket population on the main island of Hawaii was found to be silent in 2010. Research has not yet been done to see if this silence is the product of yet another independent mutation. But if the parasitic flies attack the Big Island’s population, the crickets already have the genetic raw material for selection and likely silence will fall.

The rapidity with which these populations recovered and adapted to the new threat in their island worlds also paints a picture of how rapidly following the global Flood animals would have adapted and produced the innumerable varieties to fill the many ecological niches of the post-Flood world.

These two silencing mutations . . . did not create new information that put these crickets on the path to becoming non-crickets.

Finally, though it should be obvious, we must point out that singing crickets and silent crickets are still crickets. These two silencing mutations—each essentially a non-lethal mutation that messed up the cricket wing anatomy—did not create new information that put these crickets on the path to becoming non-crickets. This process illustrates how speciation can so easily happen, how variations occur within created kinds, and how natural selection operates. Natural selection is neither the agent of molecules-to-man evolution nor the creator of new genetic information. Natural selection operated in this case on existing information—defective information with a circumstance-specific survival advantage—to allow the population of crickets to adapt to produce more crickets in which most had lost the genetic information to sing.

God created all kinds of living things about 6,000 years ago and designed them to reproduce after their kinds. The Bible reports this truth, by His own eyewitness account, to us. The science we see played out in nature—like the emergence of these two silent cricket populations—is consistent with what we read in God’s Word. Animals like these crickets reproduce and vary within their created kinds. It is not mysterious at all, but it is a marvelous example of how God’s designs allow organisms and populations to adapt to the changing conditions in the world.