How different are humans from chimps, monkeys, and mice? On a biochemical level, that is. More different than an international team of evolutionary biologists had suspected! These differences are pronounced in the brain’s prefrontal cortex and in muscles, but minimal in the rest of the brain and in kidneys. The researchers believe these differences help explain why humans are smarter while chimps and monkeys are stronger.

The researchers, whose paper “Exceptional Evolutionary Divergence of Human Muscle and Brain Metabolomes Parallels Human Cognitive and Physical Uniqueness” appears in PLOS Biology, sought to answer this question by identifying the amino acids, neurotransmitters, sugars, fats, nucleotides, and vitamins in the brains, muscles, and kidneys of healthy subjects. The team was taken aback by how very different our brains and muscles are from our supposed primate cousins. They were particularly shocked by the direction they believe evolution took as we diverged from our supposed common ape-like ancestor.

In “Jocks versus Geeks—the Downside of Genius?” Roland Roberts of the Cambridge Public Library of Science comments on this biochemical study of brains and brawn. “Somewhat narcissistically, one of the spectacular changes in phenotype that we tend to be most interested in is the enhancement in our own brain power which has occurred over the 6 million years that separate us from our last shared ancestor with chimpanzees,” he writes. “The chimp genome is famously very similar to our own, but the technological, linguistic, and cultural phenotype is clearly profoundly different.” This study of the biochemical inventory in various organs was aimed at discovering why we humans are so very different from primate animals. 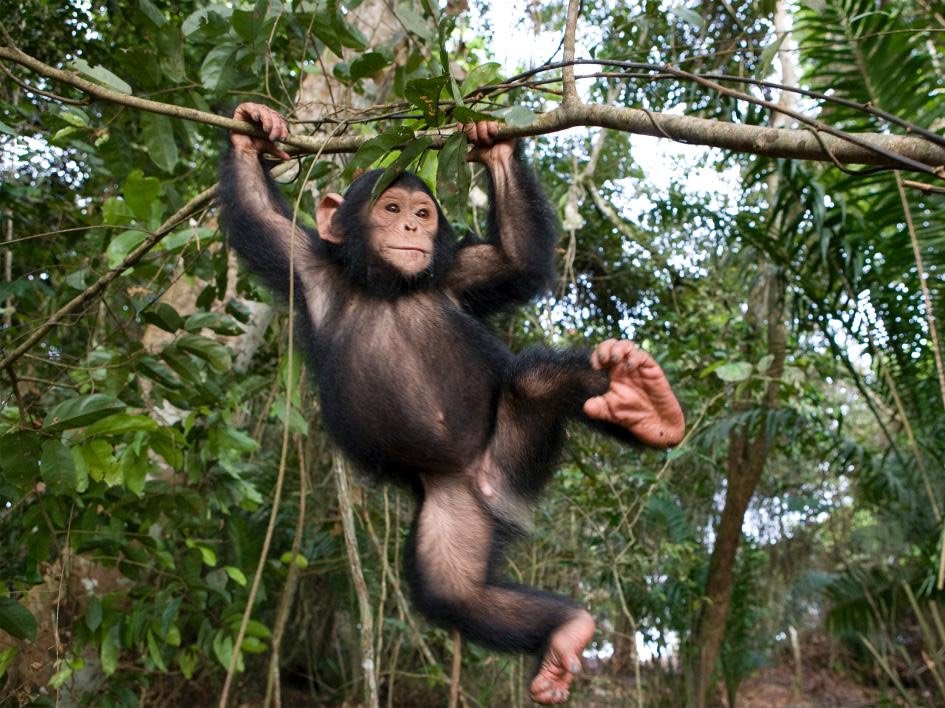 Is this chimp doing pull-ups to make his muscles strong? No, apes and monkeys are designed with strong muscles as standard equipment. In a comparison with a group of humans, including trained athletes, “untrained” chimps and macaques consistently generated greater pulling force. Evolutionary researchers believe humans evolved with weaker muscles to allow for bigger better brains while chimps evolved stronger muscles, but they have no explanation for how this supposedly occurred nor any evidence that it did. Image by Michael Poliza, via National Geographic Creative.

They were shocked to discover that the biochemical makeup of the human brain’s prefrontal cortex has “changed four times as rapidly in the last 6 million years as those of chimps.” The brain’s visual cortex and the kidneys were not biochemically different. The prefrontal cortex in humans is neurologically the seat of personality, social behavior, planning, complex thought, and decision-making. Thus the biochemical distinctions parallel the dramatic phenotypic differences in human and primate cognitive abilities.

The team was even more shocked to learn that the biochemical composition of human muscles “has experienced more than eight times as much change as its chimp counterpart.” In fact, they learned that the biochemical composition of homogenized human muscle is more similar to mouse muscle than to ape muscle. Roberts reports, “Indeed, metabolomically speaking, human muscle has changed more in the last 6 million years than mouse muscle has since we parted company from mice back in the Early Cretaceous. Most of the changes relate to pathways involved in the metabolism of carbohydrates and amino acids, and in energy production.”

Could the comparatively sedentary lifestyle typical of humans have caused the dramatic differences in the biochemical makeup of the muscles? To rule out this possibility a group of “macaques were subjected to aspects of the modern human ‘couch potato’ lifestyle for 2 months (limited exercise, stress, fatty and sugary diet), but this explained only 3% of the changes.” Thus it appears the differences in human and primate muscle composition are far more the result of genetic makeup and not environmental influence.

To see if differences in muscle composition parallel differences in strength, the team “conducted a series of experiments aimed at providing an approximate estimate of muscular strength in a pulling task.”1 Forty-two humans, five chimpanzees, and six macaques took part. “The task consisted of pulling suspended adjustable weights in a setup involving both upper and lower parts of the body.”2 The humans, maturity- and gender-matched to the animals, included five basketball players and four professional mountain climbers.

The animals performed far better than the humans, even the athletes. The animals, unlike the humans, were motivated by food rewards, so the team wrote, “The inability to control nonhuman primates’ motivation hinders the exact quantification of the muscular strength difference between humans and nonhuman primates, even in a highly controlled experimental setup.”3 They admit that there might be other reasons for the performance differences, such as the fact that the apparatus for measuring strength may have offered the animals an advantage in leverage. “Nonetheless,” they write, “our results indicate the existence of systematic differences in muscle performance between humans and nonhuman primates.”4

We hypothesize that metabolic evolution of human muscle and brain metabolomes may have occurred in parallel.

The team concludes that the differences in biochemical makeup of monkey-and-ape muscles and brains, compared to that of humans, coupled with the likelihood that monkeys and apes are stronger than humans, suggest humans were able to evolve bigger better brains by dramatically diverting resources from their muscles over evolutionary time. They haven’t performed any studies to compare the muscular endurance of animals and humans. However, given that selectively evolving a weakness would be oxymoronic within a survival-of-the-fittest evolutionary paradigm, they suggest human ancestors may have focused more on evolving muscular endurance. In any case, they conclude, “While the molecular mechanism linking metabolic divergence with changes in muscular strength on the human evolutionary lineage cannot be determined based on our observations alone, we hypothesize that metabolic evolution of human muscle and brain metabolomes may have occurred in parallel.”

What the researchers have found in this study is that the biomolecular inventory of the human prefrontal cortex and human muscles differs substantially from that of chimps and monkeys. Humans excel at the activities governed by our prefrontal cortex, and chimps do not. Whether these differences are causally related to the statistical differences in biochemistry was not assessed. Whether the differences in muscle molecules is correlated with differences in muscular strength cannot be reliably determined from this study, given the methodological limitations of the strength testing.

Humans excel at the activities governed by our prefrontal cortex, and chimps do not.

Further study along these lines would require a better investigative design as well as a look at the specific interspecies biochemical differences with an eye to their functional significance. But the investigators seem less concerned with the physiologic significance of the differences they discovered and more concerned with their evolutionary origin. “The authors speculate,” Roberts reports, “that the fates of human brain and muscle may be inextricably entwined, and that weak muscle may be the price we pay for the metabolic demands of our amazing cognitive powers.”

These differences do not represent a timeline of evolutionary change because no molecules-to-monkey-to-man evolutionary change ever occurred. God created humans and all kinds of land animals on the same day, about 6,000 years ago, according to His own Word. Humans—created in the image of God— and all kinds of animals also reproduce only within their created kinds, just as the Bible describes in the first chapter of Genesis. Therefore, no evolution could have been involved.

God our Common Designer used variations of many common designs in humans and primate animals, but similar design does not demonstrate common evolutionary ancestry. There is no reason to be shocked about biochemical differences between muscles and the portion of the brain in which many of the dramatically different capabilities of humans and animals rest. God has told us our true history in His Word, and discoveries like these—divested of the baggage of evolutionary interpretations—are consistent with the history we find in the Bible.