Astrophysicist Neil deGrasse Tyson, in an interview posted on National Geographic’s website on June 6, wants to “fix” adults he considers “scientifically illiterate.” His 13-part series Cosmos: A SpaceTime Odyssey claims its aim is to promote science literacy, but by this phrase and the content of many of his episodes, it is clear that Tyson’s concern is to expunge the influence of young-earth creationists on the minds and hearts of people.

Tyson warns of the danger of religious influence1 on science. He says it will create “a generation of people who will not understand what science is.” And “they will be intellectually crippled” (emphasis his) in their ability to contribute as innovators in science and technology. Tyson’s message complements Bill Nye’s viral video exhorting parents to refrain from teaching a biblical view of origins to children lest they imperil the economic and technological future of our country. Tyson says, “The real problem in society is not whether we’re teaching our kids enough science because, let’s say we started that tomorrow, does that mean everything’s okay? . . . For me the real challenge and the real problem are scientifically illiterate adults. . . . Let’s fix the adults; then the kids’ll be fine!”

Like Bill Nye, Neil deGrasse Tyson obfuscates the distinction between historical (origins) science and operational (observational, experimental) science. Historical science involves interpreting scientific data through the filter of what you already believe about the unobservable past. Yet engineers design technological solutions for today’s problems in the present. Astronomers observe the behavior and nature of the stars and planets in the present. Physicians discover the causes and cures for diseases and deformities by making observations, developing and testing hypotheses, trying out their ideas repeatedly in controlled circumstances—all in the present.

Science literacy is surely a laudable goal. But teaching people to uncritically accept worldview-based evolutionary assumptions as if they were observable scientific information gleaned through the scientific method is deceptive and promotes a poor understanding of science. Many of the Cosmos episodes were evolutionary infomercials mingled with scientific principles. The dire warnings in the concluding portion of this interview reveal Tyson’s keen interest in getting the public to accept evolutionary interpretations as incontrovertible facts. This approach confuses observable, testable scientific principles with unsupportable evolutionary conjecture superimposed on them. By mixing up that which can be observed with that which can only be imagined and assumed, Tyson is actually helping create “a generation of people who will not understand what science is.” 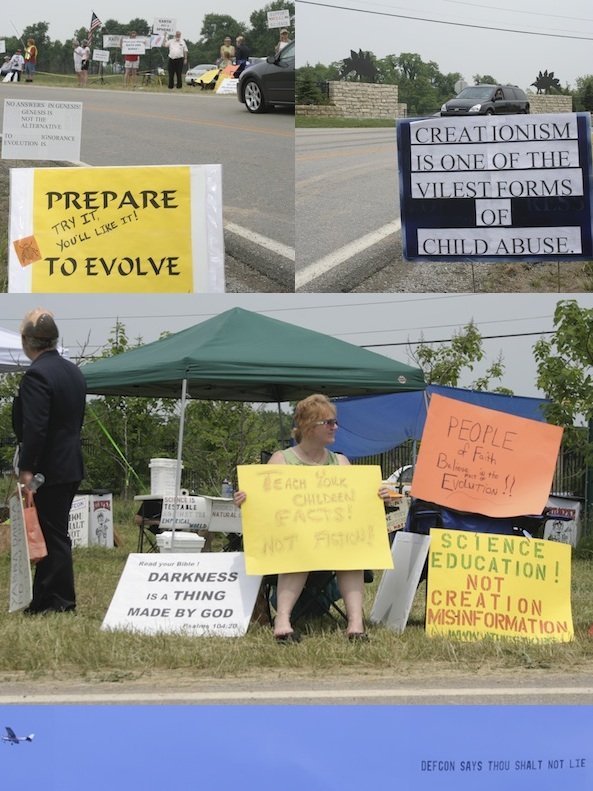 Neil deGrasse Tyson asserts that scientists—even atheists—do not try to tell religious leaders what to teach or suggest they are teaching something wrong. When the Answers in Genesis Creation Museum opened in Petersburg, Kentucky, in May 2007, to proclaim the truth of the Word of God, secular protestors gathered outside the gates to protest. They picketed, posted signs, and even hired an airplane with a banner to fly overhead, borrowing from the Bible that they don’t believe to accuse those who stand boldly for the truth of God’s Word of lying. Images: courtesy of Answers in Genesis

Tyson ends his interview with a tirade against people who because of their “religious philosophies” want to “change the curriculum in a science classroom” or “influence a school board.” Though he did not specifically refer to Bible-believing creationists in this interview, he has made his hostility toward biblical belief clear in other settings and repeatedly during the Cosmos programs. He opens his tirade with the absurd claim that evolutionary scientists and “even atheists” do not try to influence what is taught in religious settings. He says, “There’s no tradition of scientists knocking down the Sunday school door telling the preacher what to teach. That is never—atheists don’t even do that! There’s no scientists or atheists picketing outside of your church, or synagogue, or mosque: ‘Oh that might not necessarily be true!’ There is no such tradition!”

Tyson here spoke in broad terms without naming any names. While there are some who believe in creation who wish to force creation being taught in schools, we at Answers in Genesis have never advocated that, nor would we.

On the other hand, Tyson claimed that there are no atheists demanding control over what is taught in Sunday schools. But there are some who have suggested such a thing. Richard Dawkins has equated teaching children about creation with child abuse. Bill Nye has strongly warned against teaching children about creation, saying that it is okay for adults to believe in creation, but don’t you dare teach your children that. These statements are meaningless if they are interpreted to give a free pass to what is taught in Sunday schools. Imagine Dawkins and Nye saying, “Don’t you dare teach your children about creation, unless it’s in church.” No, their proscribed prohibitions are not restricted in this way.

Tyson warns against substituting religious philosophy for science. Yet, thanks to his unbounded belief in insupportable evolutionary claims, Tyson is guilty of this himself. For instance, Cosmos: A SpaceTime Odyssey premiered in March echoing Carl Sagan’s theme: “The cosmos is all that is, or ever was, or ever will be.” This in itself is a metaphysical assertion, not a scientific one. Sagan’s comment, echoed by Tyson, is a “religious philosophy.” Answers in Genesis astronomer Dr. Danny Faulkner explains:

There is not a bit of science in that statement. When Sagan said it 34 years ago and then wrote it in his book, a lot of people were saying, “Wow! What a profound scientific statement,” but it’s actually a philosophical statement. It is denial of the supernatural, saying the only thing that exists is the physical world, the natural world. But to say that with any certainty Sagan had to get outside the physical universe and see that the physical universe is all that there is. And he would have had to do that in eternity past and in eternity future in order to say that. If he could really see that, then he would be god. It’s a very bold, metaphysical statement. It’s an assertion. But it’s not science. It’s not a scientific statement.

Bible-believing scientists do not “substitute” their religion for science. But they do trust that the universe they study using the tools of science was created by a logical, wise God and that He has told us some things about His Creation in His Word, the Bible. While it is possible and even common for fallible human beings to misinterpret both scientific data and the written word, Bible-believing scientists understand the correct interpretation of accurate scientific data will never conflict the correctly interpreted (2 Timothy 2:15) Word of God.

The Word of the Creator God explains how the existence of consistent laws of science only makes sense in the context of a universe created by God. God created the laws of nature; they did not create themselves. Without those God-created natural laws, the scientific method would be useless because experiments could never be trusted to yield consistent results.

In another Cosmos-related interview back in March, Tyson said: “If you start using your scripture, your religious text as a source of your science, that’s where you run into problems, and there is no example of someone reading their scripture and saying ‘I have a prediction about the world that no one knows yet because this gave me insight let’s go test this prediction and have that theory turn out to be correct.’”2

Tyson, perhaps due to his prejudicial attitude toward biblical belief or perhaps due to personal ignorance on the matter, was here discounting the extensive body of scientifically confirmed predictions based on the Bible. Not only did many great scientists of the past draw from a biblical worldview to discover scientific laws and make great discoveries, modern scientists continue to do the same. A sampling of Bible-based predictions that have led to scientific discoveries are discussed in “Can Bible-Based Predictions Lead to Scientific Discoveries?”

While Answers in Genesis does not advocate requiring creationism be taught in public schools, we do maintain that students and teachers who are allowed the academic freedom to critically examine the claims of evolutionists will better understand the distinction between worldview-based assumptions and observable facts. Such critical thinking skills may, evolutionists fear, lead some students to discern the opinion-based foundation of claims.

These are clearly academic advantages to allowing “a divine foot in the door”3 of the science classroom rather than arbitrarily assuming that science cannot have had a supernatural agent involved at the foundation of the orderly natural universe in which we live. But the ultimate answer to Tyson’s question about the motivation of Bible-believing Christians in caring about science education reaches beyond the classroom to life, and beyond life in this world into eternity.

We believe all people should be allowed to hear the truth about how the biblical account of our history actually fits the facts of observable science. We speak out and write reviews and answer questions because evolutionary scientists loudly proclaim that the Word of God is false, that the God of the Bible is nonexistent or a liar, and that people who believe in them are intellectually inferior. They thus place stumbling blocks (John 5:46–47) in the path of those who would eternally benefit from faith in Jesus Christ, the Son of God, our Creator (Colossians 1:16–17) and the Savior of all who repent and put the trust in Him for salvation from sin and guilt.

Previous Article Silence of the Crickets Speaks Volumes About Variation and Selection Next Article Did Human Men Evolve to Take a Punch?