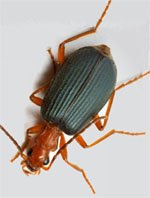 Nearly fifty years after England became the epicenter of Beatles mania, another sort of beetle has stirred up international interest. The bombardier beetle has an incredible firing mechanism that shoots a toxic chemical at attackers with superb accuracy. This design has long intrigued creationists because all its parts must be in place for the mechanism to work—making impossible the gradual evolution of the mechanism over time.

Now the beetle has made the news. Researchers at the University of Leeds in the UK who imitated the bombardier’s incredible defensive mechanism and uncovered new engineering ideas have received a prestigious award for their study.

Dr. Andy McIntosh, who led this award-winning team, explained, “Nobody had studied the beetle from a physics and engineering perspective as we did, and we didn’t appreciate how much we would learn from it.” The team sees many potential applications, from needle-free injections to fire extinguishers.

McIntosh is not only a renowned scientist but also a young-earth creationist. This latest “British invasion” is a nice reminder that scientists can be both Bible believers and excellent researchers—in fact, their work is inspired by the Creator Himself.