Researchers have discovered that certain species of sharks have developed “mental maps” to help them find destinations in their range with pinpoint accuracy. According to research published in the Journal of Animal Ecology, the sharks can locate food sources as far as 30 miles (50 km) away.1

To confirm that both tiger sharks and thresher sharks have this ability, scientists ran statistical analyses to confirm the fish were indeed “navigating” to the destination. Although sharks see fairly well, many of the journeys took place at night—in total darkness beneath the waves. 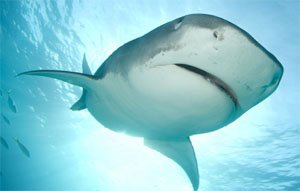 Sharks have the ability to create "mental maps" to navigate to specific destinations. Researchers are still trying to determine just how this shark GPS system works.

While the researchers have several hunches, they have not yet nailed down precisely how the sharks’ map works. One possibility is that they can sense the earth’s magnetic field, but water temperature, smells, or signals from ocean currents may play a role.

The more we learn about the animals we share the earth with, the more we see God’s hand in sophisticated behavior that is almost unfathomable to us. Although sharks’ predatory nature reminds us of the consequence of the Curse, their built-in “GPS” reminds us of Creation.