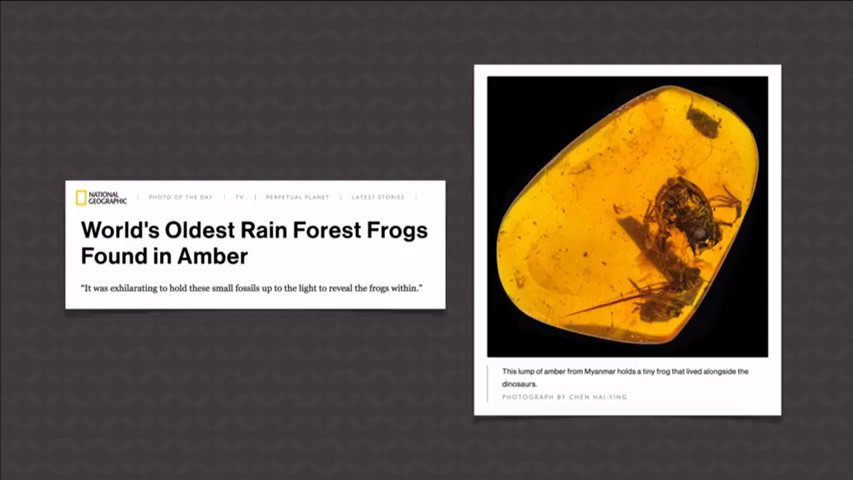 The variety within God’s creation is astounding, and the more we learn about what has lived in the past, the more we’re exposed to the variety he’s made. Amber, hardened tree resin, is a fantastic preserver of small organisms including reptiles, birds, amphibians, insects, and more. And scientists recently announced that the “world’s oldest rain forest frogs” were discovered in amber from Myanmar.

These frogs have been dated by secular scientists as being from the Cretaceous period, the same time as the dinosaurs. Of course, in a biblical worldview, we know these frogs aren’t tens of millions of years old. They are just a few thousand years old, at most. So it’s not surprising that these frogs that were stuck in amber were “similar to modern frogs in many ways.” They were just frogs!

As with all the kinds, our Creator put a tremendous amount of variety into the DNA of the frog kinds that he made. This extinct frog species, preserved in amber for us to find today, is just another example of God’s limitless creativity. While this may be a new species, it’s a frog, a member of one of the many frog kinds created by God.

As with all the kinds God made, frogs remain frogs—and they always will.

I discussed this item on Answers News today with regular cohost Dr. Georgia Purdom. Answers News is our twice-weekly news program filmed live before a studio audience here at the Creation Museum and broadcast on my Facebook page and the Answers in Genesis Facebook page. We also discussed the following fascinating topics: