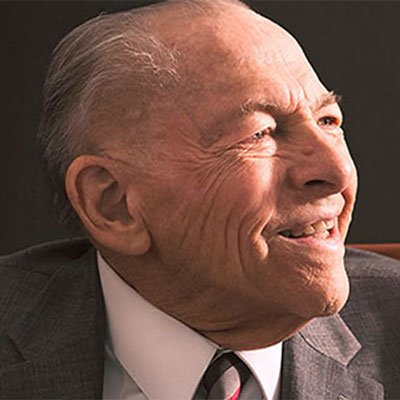 On February 5, 2020, Dr. Whitcomb went to be with his Savior. He was one of the great Bible-upholding theologians of our day and a recognized leader in the battle for biblical inerrancy. Read Ken Ham’s tribute to this giant in the modern creation movement.

Dr. John C. Whitcomb was a prolific author and captivating speaker as well as a highly regarded professor of Old Testament and Christian theology for more than 60 years. He taught at Grace Theological Seminary in Winona Lake, Indiana, from 1951 to 1990. He was also known as a superb and gracious speaker on a wide range of apologetics topics.

Dr. Whitcomb’s most famous work, The Genesis Flood (coauthored in 1961 with the late Dr. Henry Morris), is widely acknowledged by friend and foe alike as having had a significant part in igniting the modern creationist movement around the world (somewhat surprising, given that the book was primarily about the other major event in the book of Genesis: Noah’s Flood).

Among Dr. Whitcomb’s other published works are The World That Perished and The Early Earth, and commentaries on Esther and Daniel. Additionally, he has authored six widely circulated comprehensive Bible charts, numerous multimedia slides, and countless biblical and theological articles.

He graduated with honors from Princeton University in 1948 with a BA degree, majoring in ancient and European history. At the end of his freshman year at Princeton, he was led to Christ by Dr. Donald B. Fullerton, a former missionary to India.

In 1951, he graduated from Grace Theological Seminary with the BD degree (high honors) and received the ThM degree in 1953 and ThD degree in 1957 from the same institution. From 1951 to 1990, he taught in the Department of Old Testament and also in the Department of Christian Theology, in which he served as chairman for many of these years. For twenty years he also served as Director of Doctoral Studies, and for ten years as Editor of Grace Theological Journal.

From 1962 to 1990, he was President of the Board of Spanish World Gospel Missions, Inc., and served on the Board of Trustees of Grace Brethren Foreign Missions (Rev. John W. Zielasko, Executive Director) for twenty years, several of these years as Chairman of the Board.

Dr. Whitcomb lived in China three years (1927–30), served his country in Europe (1944–46), visited mission stations in Peru (1950), helped in the establishment of a church in Puerto Rico under the auspices of Grace Brethren Foreign Missions (1958–59), helped at an extension program for Grace Seminary in France (1958–89), and has lectured in Canada, Latin America, Western Europe, Central African Republic, the Far East, and in most states of the United States. He has been on two study tours of the Holy Land (1952, 1982).

Dr. Whitcomb now serves as president of Whitcomb Ministries, Inc., and resides in Indianapolis with his wife Norma. His life and ministry may be summed up in this quotation: “I want to be in the full-time business of finding out what God says and telling as many people as I can.”